7 ways to motivate your child to speak the minority language 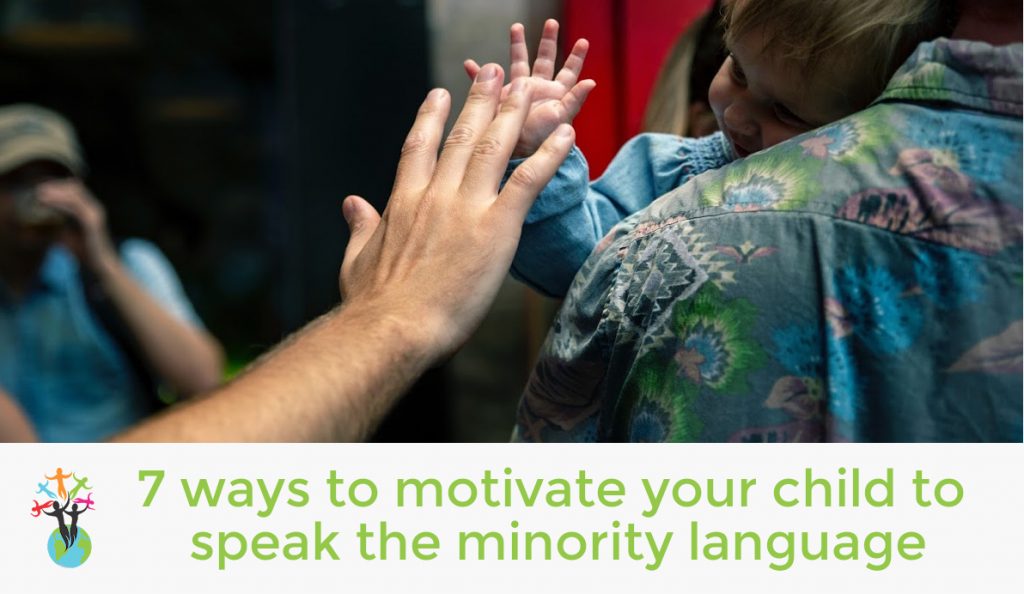 Motivation is the key to any language learning, never more so than for a bilingual child keeping up with the minority language.

2 – Need
Nothing is as motivating as the need to speak a language. Without coercion, come up with situations where your children will want to communicate with monolinguals in the minority language. Think of play dates, Skype calls, sports and other activities in the language.

4 – Fun
Make using the language fun – think of activities in the minority language which engage your children and make them want to speak it. This could be games, hobby groups or even computer games in the language

5 – Positive feedback
I am a great believer in giving positive feedback. In the long run, encouraging a behaviour which moves towards the desired goal is far more effective than being told off for using the wrong language. Keep it realistic though: children see through you very quickly if they get praised no matter what they say. Your feedback needs to be honest.

6 – Incentive
Children respond well to different incentives, but always make them age-appropriate. Your five-year-old will love getting a smiling sun sticker on the wall chart, but for your teenager you need to figure out something different. I also think it is sometimes okay to bribe your children to get them to speak your language. However, use bribes sparingly and save them for crucial situations when your children show tendencies to drop the minority language.

7 – Be a great role model
The importance of you as a role model for your child can not be underestimated. Show pride in your language and use it whenever you can. Read books – any books: biographies, chick lit, novels, non-fiction, cooking books, you name it – you children will also want to read. Teach them about the culture of your language: traditions, food, clothing, arts, sports, history, fashion, movies …

1 – Refuse to talk
I have heard of parents answering their children only when they are addressed in the “right” language. This is a very drastic approach and in my opinion, not to be recommended. You should never stop communicating with your child. The very essence of language IS communication. The choice of language should not become a battle ground or be associated with feelings of being forced to do something.

2 – Pretend not to understand
This might be a bit controversial, since I know several parents have pretended not to understand their children when they use the majority language. They have also probably succeeded in getting their children to speak only the minority language. I am however not keen on this approach, as it is a short term solution and you might be accused of lying.

3 – Threaten with negative consequences
As I mentioned earlier, I am all for positive encouragement. You may get your children to speak the minority language by shortening their playtime or refusing treats if they use the majority language, but you are creating a negative atmosphere around the language which is not conducive to your children’s willingness to use it.