One parent, one language – OPOL is dead, long live OPOL! 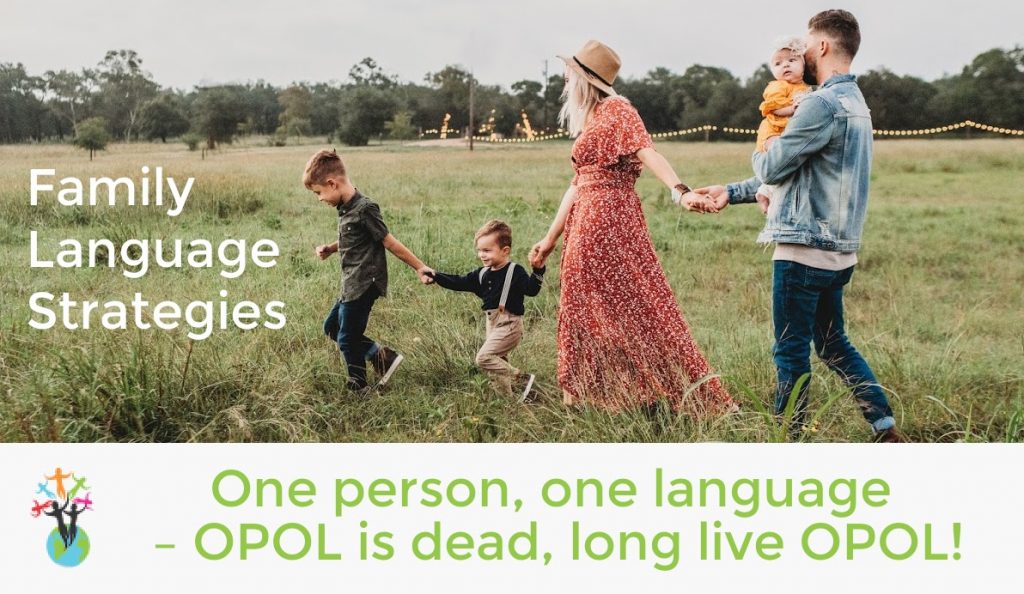 Which strategy should you use to raise your bilingual child? Ask the question and you can be forgiven for getting all confused with the different viewpoints you are offered both by experts and other parents. Today I will take a closer look at the best-known of the family language strategies: one parent, one language, aka OPOL.

For almost a century the OPOL approach (first mentioned by Professor Maurice Grammont in a letter to his colleague Ronjat) was hailed as the only correct way to raise a bilingual child in a multilingual family. (As a side note, I agree with Ute who advocates that the original term ‘one person, one language’ is better, but as the ‘parent’ version seems to be more popular, it made the title).

You can find very recent articles, such as this one, that state that it is not only important, but “imperative that parent select the language he/she is most comfortable, especially in conveying his/her feelings. Otherwise your child would get confuss and mixing the languages can be a real problem.” This is not correct, children are skilled at distinguishing different languages, even when they are spoken by the same person, and children can learn to understand and speak both of them. Whether or not the children will want to speak both the languages is another matter and depends on several factors.

OPOL has also been called a “versatile, easy-to-follow” and “very natural process”. I don’t know about “versatile”. If you are strictly following the consistency rule, I wouldn’t describe the approach as especially versatile. The rules may be easy to understand (one parent/person, one language + consistent language use), but this does not make them “easy to follow” – What do you do when the whole family is together? What to speak when other non-speakers of the language are present? What to speak in public so not to come across as rude? What if one parent feels left out? When it comes to OPOL being a “natural process”, yes, it is natural in so far that parents (usually) speak their native languages to the child, something which should come naturally to them. However, if the other parent does not know your language and you have never spoken it in the home, it may not feel natural at all, especially not with the first child and keeping in mind that you will not get a response in the language for several months!

In another recent article, the writer comes to the opposite conclusion to the previous article: OPOL is “the most demanding and a difficult way of teaching a language” but that it still is “the most effective language strategy in cultivating bilingualism”. With the exception of Japan(!), since “socio-cultural factors particular to Japan may render the implementation of the OPOL strategy both impractical and ineffectual”.

Confusion reigns, is the phrase that springs to mind!

About twenty years ago, some experts did start to question whether the OPOL strategy was the best one after all. Should OPOL be rejected as too elitist, used only by well-educated and relatively well-off parents? I know of several families who have successfully raised bilingual children using OPOL but can not be described as either, so I can not subscribe to this view.

Professor Barbara Zurer Pearson also casts doubts of OPOL as the most effective approach in her 2010 article “Bringing up baby. Recent studies suggest that ‘one parent, one language’ is not the best strategy.” Her statement is mainly based on research done by Professor Annick de Houwer, the conclusion of which was that “the 1 parent/2 languages method produced the most active bilinguals – 79 percent, compared to 74 percent using OPOL, and 59 percent using a mixture of the two methods.” Professor Zurer Pearson argues that the ‘minority language at home’ (mL@H) approach may be a better option in many cases – this being the approach also favoured by projects trying to preserve a certain language from going extinct.

Professor François Grosjean also refers to the De Houwer’s study and questions whether OPOL is the best solution in his post “One person – one language, bilingual children”. In another article he points out that the De Houwer study also found that 97% of children from families which used the mL@H strategy became bilingual, thus leaning towards a similar conclusion as Professor Zurer Pearson.

Does this mean that any family using OPOL should change their strategy to give the children the best possible chance of becoming active bilinguals?

No – it all depends on the very specific circumstances of each individual family. The variables are just far too many to make any one-fits-all recommendations based on research, no matter how well conducted and how large. Even if you were to select the families for a study to be as similar as possible, there will always be great differences as to the quantity and quality of the exposure, attitudes to the languages inside and outside the families, family backgrounds, expectations, ambitions, time spent fully immersed in a language (e.g. during holidays) and so on. Research into multilingual families is however still extremely valuable as it does shed light on the complex phenomenon of bilingual children.

So what kind of family, if any, should choose the OPOL method?

If the ‘minority language at home’ mL@H strategy is not an option, e.g. when there is no language that both parents feel comfortable in speaking with the children, the natural choice is OPOL. It has worked for many families and will continue to do so, and especially in scenarios where there is not an equal amount of exposure to all the languages a child is learning. As Professor Grosjean says “the one person–one language approach deserves to continue being an option for parents. But at the very least, it should be adapted (when that is not already the case) and a family plan should be set up”. I couldn’t agree more, and this is why creating a Family Language Plan is an important part of my book “Bringing up a Bilingual Child”. To find the best approach, it is vital to understand the exact circumstances of each individual family.