Parents of bilingual children – what if one of you feels left out?

by Rita | Jun 4, 2014 | Being the parent in a multilingual family, Challenges, Family life, Practical advice | 6 comments 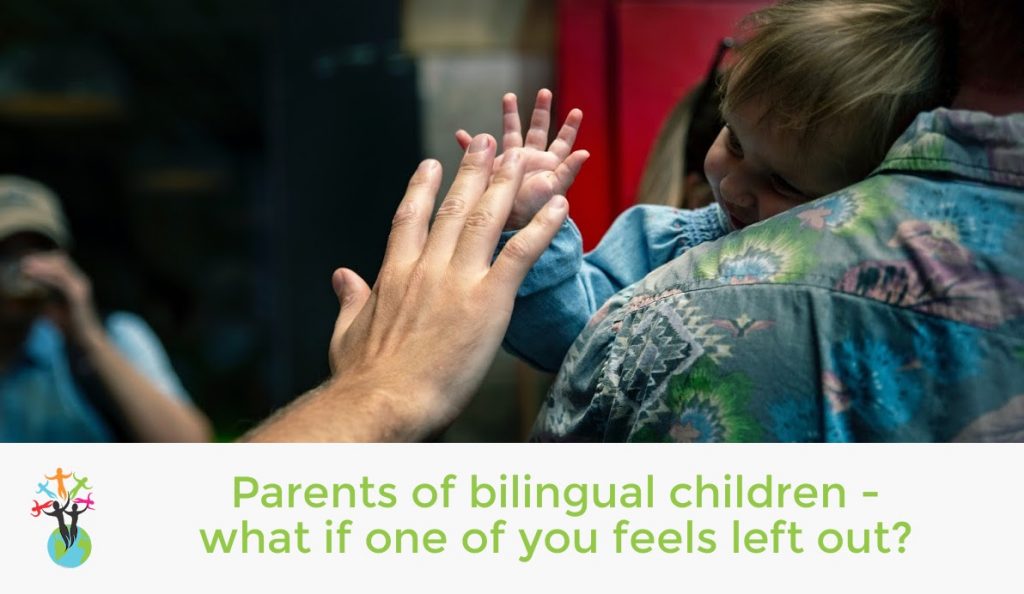 “What if I don’t understand what my child is saying?” is one of the bigger concerns a parent of a budding bilingual child can have. It can be a worry especially for parents in families who follow the one parent, one language (OPOL) strategy.

Parents who do not understand the other parent’s language can have a real fear of being left out of family conversations and not being able to fully follow their child’s language development. Depending on the family’s language setup this can happen equally to minority and majority language parents – it just depends on which language the child learns first.

This concern is probably the most common in families where the child initially gets more exposure to the minority language and this becomes the first dominant language for the child. The majority language parent who naturally also wants to share the experience of the child learning to speak may feel side-lined. At this point is of not great comfort to the parent that the child’s dominant language will most likely change to the majority one after some years. Small children can learn two languages simultaneously, so the majority language parent should be encouraged to interact as much as possible with the child.

What to do to prevent a parent from feeling left out? My recommendation – as always – is to openly discuss the situation. The parent who is worried may not want to bring up the topic for the fear of sounding selfish or uncooperative, so it is perhaps good if the parent who speaks the child’s dominant language asks the other parent if there are any concerns.

Reflect on how the decision to bring up the child to become bilingual was made. Perhaps it was not a conscious decision at all, just something which was regarded as a common understanding. But was it genuinely “common” in the sense that both parents had their say and were given the opportunity to raise their concerns? Or was it just taken for granted (usually by the minority language parent) and not discussed at all? If it was a mutual decision, what was the plan – who would speak what language when and has this plan been followed?

Discuss the situations where one parent feels left out – which situations are especially difficult and are there occasions where it does not matter as much? If ALL situations where “the other language” is spoken make a parent feel uncomfortable, then you may have to have an even more profound discussion about how you can make bilingualism possible for your children.

What to do to solve this conundrum? There are really only two options: using a common language or translating – well, there is a third: that everyone learns each other’s languages, but that is not really realistic, at least not in the short term.

Translating is probably the solution most families go for. Initially translating more or less everything usually does alleviate the worst worries. Sometime parents forget that a child does not learn to speak overnight and both parents will have the opportunity to pick up words alongside the child, providing the willingness to do so is present. Families generally find that the need for translations lessens by time. So much however comes down to attitude – a positive feeling towards all family languages makes everything easier. This is the reason why it is paramount to discuss the situation and come to an understanding.

Whatever you decide to do, the relationship between a parent and a child is more important than what language is spoken. Language is there to make communication easier, not to cause rifts in family life. If you do have to give up on a language, don’t feel that you have failed. You did your best in the given circumstances. Also keep in mind that a language which has become “passive” for a child – meaning that the child can understand the language but is reluctant to speak it, also called receptive bilingualism – can be “brought back to life” later on. And, like I have said on many occasions, some language knowledge is better than none at all.