Q&A: How to pass on both Cantonese and Mandarin Chinese as minority languages? 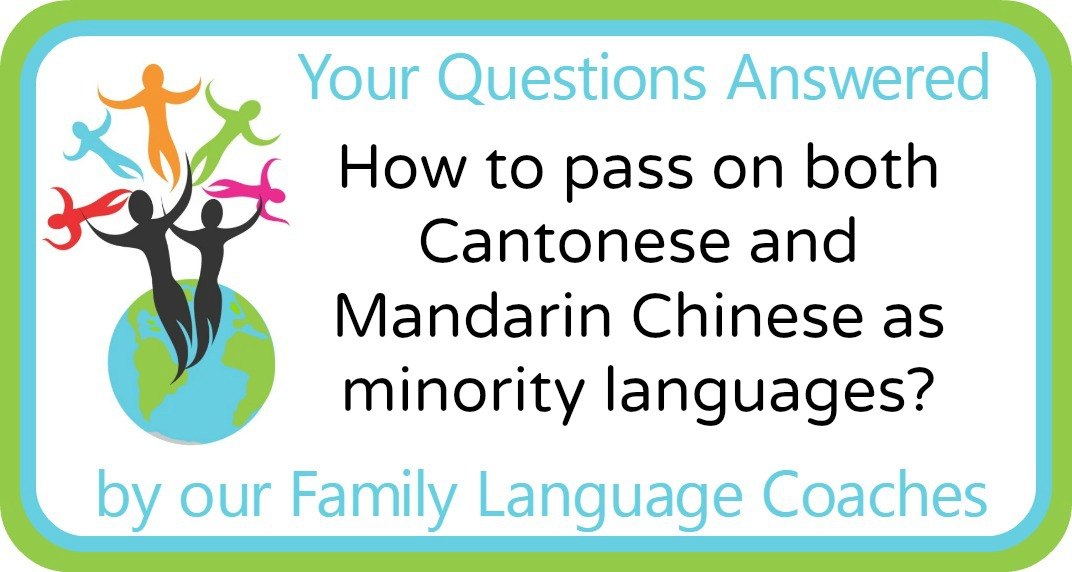 Both my husband and myself are native in speaking Cantonese. We live in the US but we communicate in Cantonese with my 2-year-old as well. My husband is also a native Mandarin speaker while I speak Mandarin with some accent and sometimes just speak by guessing how to speak some of the words. I’m not concerned about English as my son has started preschool for a couple hours per day. Our Filipino nanny speaks a mix of Cantonese and English to my kid and she isn’t very fluent in either language.

My son has started to talk a lot of Cantonese, a bit of English. My concern is Mandarin. He refuses (very often crying hysterically) whenever me or my husband start talking to him in Mandarin. I’m considering Chinese school later on, but as far as I know, none of the people I know learned much from Chinese school here.

We also have an option to send my son to Chinese immersion school. But my husband does not like the idea as he likes my son to go into more popular and mainstream school. I’m planning to take my son to Mandarin/English summer school overseas next summer. It would be a 1 month program and hopefully we would continue sending him every year.

Mandarin and Cantonese are both dialects of Chinese, I learned Mandarin by speaking and making friends who speak it. Do I expect my son to speak it like I do eventually? But with English being a main language for him I’m concerned that he would end up not interested in either dialects.

The writing part is even harder to learn. Reading out loud in Cantonese and reading a book are completely different as well. Mandarin is speaking of what we write but Cantonese isn’t. Am I expecting too much for him to be able to read and write Chinese? How can he be trilingual possibly?

Thank you for your questions.  It was great to know that you and your husband have started the multilingual journey with your young son.  How exciting it must be to hear him speaking Cantonese to you!  Below are my recommendations for you at this stage.

Home language environment and input:  You and your husband are both speaking Cantonese to your son.  Your Filipino nanny speaks a mixture of Cantonese and English to him.  Therefore, your little boy has a high language input in Cantonese.  Your husband is also a native Mandarin Chinese speaker.  You speak Mandarin as well.  However, your son often cries when you or your husband speak Mandarin to him.  This is an alarming sign and it is important to know why your boy is associating Mandarin with an unpleasant feeling.  My question for you is how often you and your husband speak Mandarin to your boy.  Have you been speaking Mandarin to him since he was born?  Is this a new language that you recently added to his life?  If it is new, then I would recommend that it be introduced gradually, in a fun and comprehensible way for him.  For a toddler, using words and language to communicate is a milestone.  For your little boy it is a wonderful achievement that he can tell you what he wants and you can give him a response.  Therefore, the Mandarin input needs to be comprehensible for him and the percentage of the input needs to be increased gradually so he can pick up the language and speak it.

Language goal for your son:  You would like to set a goal for your son to be trilingual.  However, you wonder if it is too much for your son.   According to researchers and parents who have been on the journey it is a reachable goal and there are many families that have done this.  I recommend you read the book Growing up with Three Languages: Birth to Eleven

and the article “Raising a Trilingual Child.”  Both are good references for you.

Current language input for your son: Cantonese has the highest input at this time with you, your husband (primarily) and the nanny (limited) speaking the language to him.  English has some input from his preschool.  Mandarin seems to have less input at this time.  Do you have a family language plan?  Do you plan to adopt one of the major systems such as one parent, one language (OPOL) or minority language at home (mL@H)?  Multilingual families such as yours have used both plans successfully.

Summer Camps:  Mandarin summer camps are a popular study-travel program used by many Chinese parents, parents with Chinese heritage backgrounds, and non-Chinese speaking parents.  There are many Chinese language and culture summer camps designed for children who are learning Chinese language as a heritage language or as a second language in China, Hong Kong, Singapore, and Taiwan.  When the child is young and has some basic understanding of the Chinese or Cantonese language they can also enroll in a local play-based preschool or a local play-based summer program overseas to have the full immersion experience in not only the language but also the culture.  This can be a very positive experience for your child and it will help him to bond with the language and the culture on a different, less academic, level.  It may also help him associate the language with positive experience and boost his language learning even after you return to the U.S.  I am speaking about this from a personal experience with my children, and the students and families I have worked with.  At the same time, there are Chinese immersion summer camps available in the U.S. if it fits the family schedule better.

Picking up Mandarin Chinese by playing with Mandarin-speaking peers:  Is it possible?  Yes.  The key here is environment.  Is there an environment available for him to pick up Mandarin by playing with Mandarin-speaking friends?  Is this a consistent input?  If there is a weekly play date with his Mandarin-speaking friends then you are creating a need for him to use the language even if it is parallel play at beginning.  When the interaction increases the language use will increase.  This is a great way to encourage the use of the minority language.

If you have any further questions or need clarification, please feel free to write again.  Wishing you the best on the multilingual parenting journey! 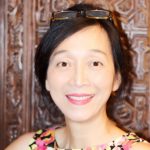 Amanda Hsiung-Blodgett, also known as 'Miss Panda', is the founder of Miss Panda Chinese, where she shares Chinese language learning resources as well as interviews of authors and parents on multilingual parenting strategies. She is also the author of the top-rated audio program, Let’s Learn Mandarin Chinese with Miss Panda! Amanda is a dynamic language instructor with over 15 years’ language teaching experience. She was born in Taiwan and her parents are from China. After graduating from The University of Texas at Austin, she worked in the entertainment field at Warner Bros. and started her language instruction and coaching services. She was the host for 'The English Club', a top-rated language learning program on the National Education Radio Station (the equivalent of PBS) in Taiwan. Her international teaching experience includes Taiwan, the U.S., Morocco, Canada, and Ecuador. Amanda is currently sharing Chinese language and culture in Northern Virginia with her husband, two children, and two cats, Qwerty and Bella.