Q&A: Are bilingual siblings similar in their language development? 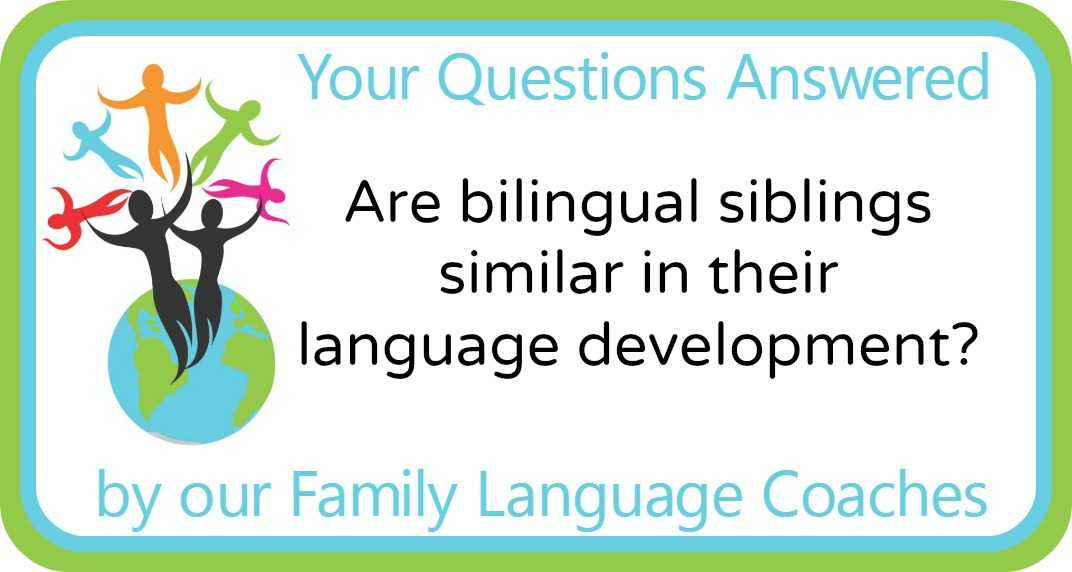 We moved as an English speaking family to Spain when my daughter was one, at the time none of us could speak Spanish and it was pretty hard. We naturally spoke English in the house and we still do.

My daughter did not speak in sentences until she was about four, apart from communicating her needs like I’m hungry and or I’m tired and she babbled a lot like a baby. She could not follow simple instructions and looked very confused when I spoke to her most of the time. When she went to school her language was obviously very poor and the teachers were unwilling to work with her.

When I moved her to another school they classed her as being special needs and have moved her to another school with autistic children where the main language is Valencian, a dialect of Spanish. So now she has three languages and stutters, next week she will be eight years old. Her English is much improved but reading and writing and maths are very hard for her, but she is certainly not autistic.

I have another child now, born in Spain, he understands my instructions perfectly and obeys them even though he is only 15 months old. He is starting to use words like cat, dog, shoes, up. He is exposed to Spanish through his sister and through me talking to everyone around but I don’t talk directly to him in Spanish. My Spanish is very good now but I don’t want to speak to him in two languages. I am obviously very eager for him to start talking, he is bright and happy, we have had such a hard time with his sister and the delays in getting help with her have seriously affected her education.

My question is when should I introduce my younger boy to school? I do not want him to go into himself like she did, there is also the fact that they are both mixed race which did cause some bullying with my daughter when she started school. I stopped trying to talk to my daughter in Spanish, against everyone’s advice because I wanted her to have her mother tongue. She definitely understands more English than Spanish but also seems to understand Spanish more than I think.

Any tips would be great!
Catherine

Thank you for your question! I am sorry to hear about the challenges with finding your daughter a suitable school. You do not mention whether she has been assessed by a professional (not just a teacher) with regards to her overall development – if not, perhaps this is something you could discuss with your paediatrician, so that your daughter can get the appropriate support with her languages and the tasks she is struggling with.  Note that stuttering is not caused by bilingualism, but if she feels unsure when she has to speak Spanish or the newly introduced Valencian, this may well affect her stuttering – just like any other situation where she may feel nervous.

I am glad that you stood your ground and continued to speak English with your daughter, even when advised to put more emphasis on Spanish. It is important that your daughter feels safe in her language with you and can continue speaking English as she is used to.

Your son’s language development sounds perfectly normal and I cannot see any reason for holding him back from school. Bilingual siblings can develop linguistically very differently, and as you describe, your  son has picked up words and phrases quicker than your daughter did. I can see no reason why he would react negatively to school. Again, if you are in any way worried, then you should consult a child psychologist for an assessment. I recommend that you also continue speaking English with your son. It is interesting, though, that your daughter has opted to speak Spanish with him. This leads me to think that her Spanish may, as you say, be better than you think.

You also mention the fact that your children are mixed race, that this caused your daughter to be bullied at school and that you are worried that the same will happen to your son. I am very sad that your daughter had to experience this, it is heartbreaking. I am no expert on this topic, but I would not allow it to change anything with regards to when your son goes to school. As parents we can only be vigilant and stay in close contact with the school so any bullying can be dealt with at an early stage, but I do not think it should change the way we behave.

Wishing you and your family all the best for the future and I hope you can get the right kind of support!