Q&A: Big sister’s concerns about the language choices for her little sister 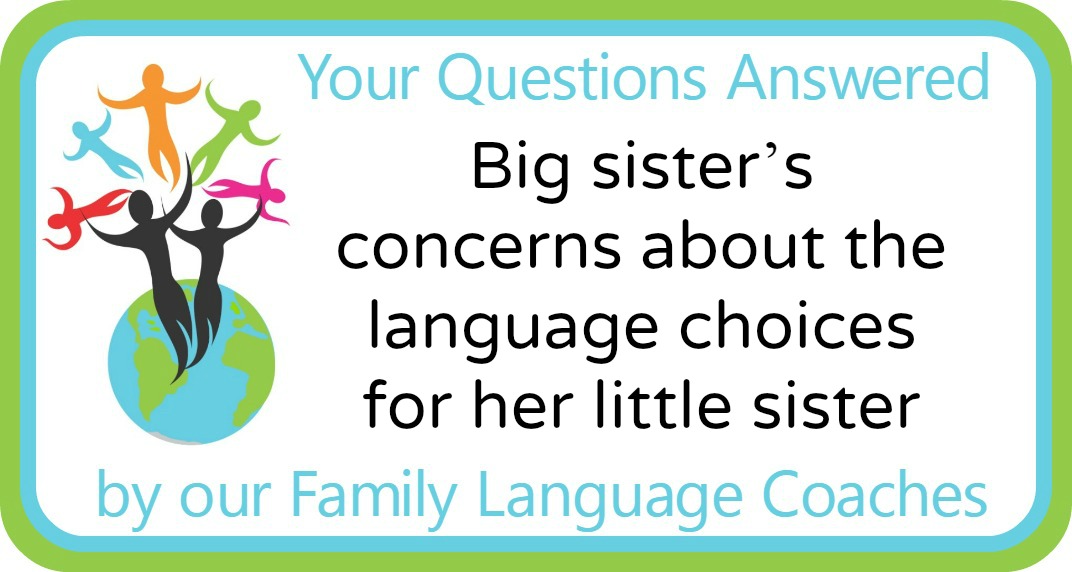 I am not a parent, just an older sister whose parents are struggling with handling this whole bi-/tri-/quadri-lingual situation. All they ever say is “don’t forget Chinese”, and it seems like they’re dismissing some other important concerns here, for the whole family.

My little sister is turning 6 this year, and my parents ordered the whole family to speak to her in only Mandarin Chinese since her birth. (Baby talk was okay, I guess.) Sure enough, she learned English very quickly in kindergarten, and currently her English may be better than my Spanish.

She seems to have less of the social struggles I had when I first moved to Canada at age 7, since she can communicate, but still, she has many interpersonal issues due to lack of social experience due to the fact that my parents don’t go outside Chinese-speaking social circles; they seem to refuse making friends with non-Chinese people. (Not racist, just language…) Also, they barely have any social activities for us at home. Friends of theirs, and the children of those friends, are rarely contacted or invited over.

Thus, my poor sister only started having real social experience a year ago at her entrance of kindergarten. Now she is doing much better, knowing much better English than before, and I am thankful for that.

All her TV-shows, music, whatever are in Chinese. Everything is English-immersion as soon as she goes to school. She lives with it and is pretty happy.

Lately, I’ve begun to teach my sister some Spanish, because I’ve simply grown tired of English and wanted to speak with someone (not many Canadians where I live speak Spanish). And, of course, the very number of hispanohablantes in the world should prove that this language will be highly useful in her future. Since she’s coping excellently with being bilingual (her social problems are no longer related to language), this should not do any harm – hey, once she can speak it, she’ll be able to speak the world’s three most commonly spoken languages!

However, my parents soon decided that they may (or may not) send her to a school which only teaches lessons in French Immersion. IMMERSION as in, lessons are completely in French, but everyone speaks English with their friends at recess. Teaching her a language at a relaxed, conversational level will not do harm, but immersion is a different story! She hasn’t even gotten around to generally getting along with most kids yet. Throwing this in will be a huge obstacle for her, which will bring in the factors of her social circles, our family’s communication and values, and her own linguistic capabilities.

Their argument is that the French school has the best rating and reputation compared to all the other schools around, like the one she’s currently at (which is doing badly, according to them). It’s great to value education of good quality, but there has been no final decision just yet. It’s a difficult choice, and I don’t think they want a 14-year-old to interfere, but I simply wish the best for my sister and my oblivious parents.

Furthermore, French and Spanish are very easily confused. So far, she hasn’t confused any languages, which is outstanding, but throwing a fourth language into her life… Giving up Spanish immediately isn’t going to help, as the phrases are already imprinted in her mind and she can easily confuse herself. And besides, she says she wants to learn Spanish, and that she does not want to start a new language. (We can take this with a grain of salt, as someone can only partially judge what they want when they do not even know what it looks like yet.)

The biggest issue for most Chinese expats is usually keeping the Chinese language alive, and I don’t think she’ll have a problem with that, with us at home supporting her. She loves Spanish, she’s fine with her two languages that she’s able to communicate in — she is absolutely fine, just needs to round up her social skills.

Sometimes, my parents really struggle to see how oblivious they can be to the child’s perspective. But they want me to stop teaching her Spanish. They want her to go to a French Immersion school, and they discourage ME from learning Spanish thinking it is detrimental to more important aspects of my life (while I am completely fluent in Mandarin, learning Dutch rapidly, and doing better in my French class than the Immersion students – I was never in Immersion). They barely have any friends or social activities for my sister to exercise her real-world abilities. (We do some family recreation, but that is it.)

If I sound worried, then that’s because this is an actual issue that needs to be taken care of. And that the people who are supposed to have that responsibility, the parents of the bilingual children, aren’t taking care of it properly.

Thank you so much for any help, advice, or even just considering my thoughts for a second. I know it was long, but I appreciate all the help I can get.

Thank you and have a great week!!
J

Thank you for your very heartfelt message about which languages your little sister (and you) should be learning. I can feel your genuine concern and understand your dilemma. The questions you raise are about the school your sister should attend and whether you should be learning Spanish and teaching it to your sister.

When it comes to the school, I always recommend that parents choose the best possible school for their child, sometimes this may be a bilingual or an immersion school, but the language should as such not be the main determining factor in the choice. By what you write, your parents have done their research and have found the French Immersion school to be the best option.

I do understand your concerns about your little sister fitting in, but I would expect the school to be used to dealing with new pupils who do not yet master the French language and helping them settle in. I would recommend that you as a family arrange a meeting with the school so you can ask any questions and voice any concerns you have – please ask your parents about this and also express your wish to be there at the meeting.

You mention that your sister has fit in well in her English-speaking kindergarten and is happy with it. It is right that she is not able to judge what it will mean to learn another language and change school, and I don’t think this is a question you should really ask her. If your parents decide to enrol her in the French Immersion school, you would want to support your sister as best as you can through the transition and beyond. Creating a negative attitude to French would not be helpful, so be very careful how you speak about the language choices with your sister. You seem to have a great sisterly bond and she will look up to her big sister.

Children can juggle several languages, especially so in scenarios where each language is associated with a specific person or situation. As you mention, your sister’s Chinese is on a sound foundation since it is your family language and her English is also proceeding well. If she were to be introduced to French in the immersion school, the classes would be another language environment for her. In addition, she would be continuing to speak English with her school friends.

Then we come to the question about learning Spanish. You are clearly a polyglot in the making being fluent in Mandarin and English and learning both Dutch and French as well as Spanish. The more languages a person knows, the easier it is to learn more, and I cannot see why you should not be learning Spanish as you are very interested in it. I of course do not know the reasoning behind your parents asking you to stop learning Spanish – are they concerned that you are spending too much time on it? Would they like you to focus on other school subjects? I can only advise you to show them that you can do both and explain to them how passionate you feel about Spanish.

French and Spanish are both Romance languages so there are significant similarities between them. However, this does not mean that you must stop teaching your sister Spanish words and phrases, independent of which school she attends. She is big enough to understand the concept of different languages and should there be any confusion, you can iterate the differences between French and Spanish. Please do keep in mind though, that Spanish is your interest not your sister’s choice, and if your sister does go to the French Immersion school, then you might want to consider what is the best way to support her. She might need her lovely big sister to also help her with the French language.

Wishing you and your sister a successful multilingual journey through life!