Q&A: Should a bilingual family swap from OPOL to mL@H when moving to a new country? 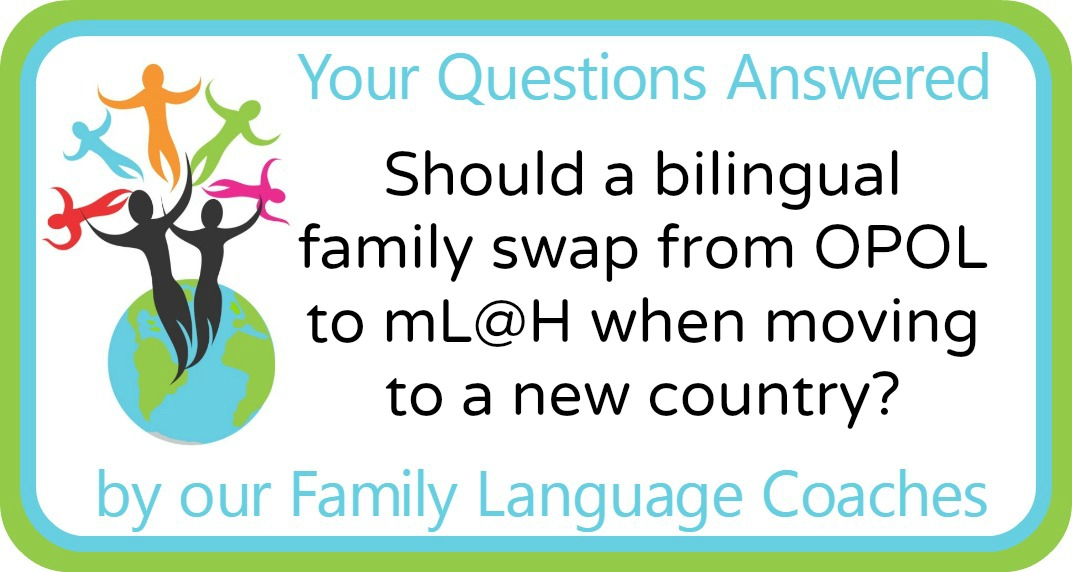 thank you so much for this website, it has been such a great resource and source of positive reassurance on our journey to raise bilingual children.

I have a question regarding switching the language method in the family. My husband is American, so English native and is learning German. I am German and speak English almost at native level. Our two children, who are 1 1/2 and 6 years old, grew up in the USA with OPOL (my husband spoke English to them and I spoke German) and both kids attended English-speaking daycare.

We recently moved to Germany. Since then, our older child who understood German perfectly but often refused to speak it when we lived in the US, quickly became fluent and speaks German to me and outside of the home and continues to speak English to her dad. To her younger brother she speaks in English or German. Our younger child was just starting to talk right around the time we moved and uses almost exclusively German words.

Due to my husband’s travel schedule we are concerned that our younger child may not get enough exposure to the English language if we continue with OPOL so we are thinking of switching to ML@H. Can you please give us some advice on the pros and cons of this?

Thank you for your question about choosing the family language strategy after moving from an English-speaking environment to a German-speaking one. Your kind feedback about the site makes my heart sing – this is the reason I keep on writing, speaking and supporting parents, much appreciated!

I understand your concerns about the amount of exposure to English after your move to Germany. The dynamics have changed, as the majority language will now be German instead of English for your children.

Your elder daughter has already taken strides towards German becoming her strongest, and possibly preferred language. Based on experience from other families, it is highly likely she will in due course also start speaking German with her little brother. Once they are both siblings are in school/daycare, German will probably become their common language. This is a normal development in multilingual families. What parents can do to influence the language children choose to speak with each other is to be great role models by continuing to speak the minority language with their kids. Trying to “order” the children to stick to a certain language is in my opinion not to be recommended.

Using one parent, one language (OPOL) while you were living in the US was the natural choice for you and I am happy to hear that you did manage to pass on the German to your elder daughter to a level where she was able to quickly pick up the language once immersed in it in German.

Now when the level of exposure to English has changed drastically, and especially if your husband’s work schedule means that he will be spending a considerable amount of time away from the children, it is the right time to reconsider your family language strategy. Statistically the minority language at home (mL@H) approach is the most effective one when it comes to passing on two languages to children. To maintain and develop your children’s English it would make sense for English to become your family language, i.e. you would switch from speaking German to using English with your children (also when your husband is not present).

Statistics and sense is one thing, feelings are however another. I understand that your English is excellent and that you would have no difficulty in speaking English with your kids, but how does this thought make you feel? The switching process in itself is not easy, but that will just be a phase which you would overcome by staying persistent. It is the long-term effect of your decision you need to consider – do you think you will be fine in using English in any situation? I am not questioning your ability, I just want you to make this decision with an awareness of what it means to the inevitable change in the nuances of communication between you and your kids. Also keep in mind that should it become overwhelming for you, you can always switch back, or even use a variation of the time and place (T&P) approach.

The other thing you need to take into consideration is your son who is only just learning to speak. If you do change to English as your home language, that will become his strongest language until he gets more exposure to German from daycare or playgroups. Small children do pick up a language amazingly quickly once immersed in it, but there is of course a period when they cannot communicate with their peers and teachers. I have been through this with my younger daughter, and she has no averse memories from the time (she is now an adult). My daughter was of course older, six years, however you would expect a more emotional transition phase for an older child unable to communicate than with smaller children who usually adapt more easily.

All in all, I do think that switching to mL@H with English as your home language would be the best bet for your children to grow up fluent in both English and German.