Q&A: Do bilingual parents have to choose one of their languages to speak with a child? 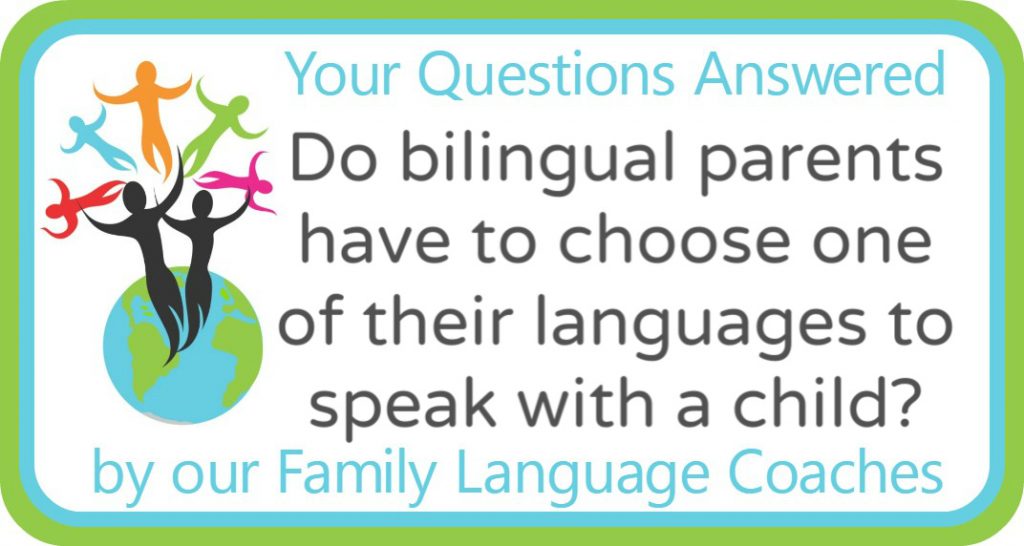 I am Wadha from Kuwait. My partner and I live in Kuwait (Arabic is used in the community) and are bilingual parents: Arabic native speakers, but we both speak English as a second language.

Our dilemma lies in that we cannot decide what language to speak with her at home or in the community. We noticed from our friend and family that when their children are sent to English school but are practicing Arabic at home and in the community that it results in Arabic being the native language and the child speaks English as a second language because he is exposed to it only in school environment.

On the contrary, when some of my friends and family choose to speak only English with their child and sent them to English international school, then the child speaks English fluently because they practice it most of their time at school and at home. When talking to other Arabic speaking family members or in the community they cannot speak Arabic fluently and always choose to speak English even to non-English speakers.

I thought about the OPOL method, but it would be hard for us as parents because we speak both languages with each other regularly, so sticking to one language only will be hard and speaking both at the same time to the child maybe confusing to them!

To summarize things for you: The school language is English but Arabic language classes are given. The community and family members’ language is Arabic, but young children spend most of their time in their nursery or at home so the community language does not affect them so much. My partner and I can speak both languages but are lost on the right approach to help our child master both languages and not have one take over the other.

We would love for our child to speak both languages fluently in the future!

Thank you for your message about choosing the language you speak with your daughter as bilingual parents. She will be exposed both to English and Arabic and you wish her to be fully fluent in both.

It is great that you have already put a lot of thought into the different options. You have concluded that the one parent, one language (OPOL) option would not suit you, as you would struggle to stick to one language. As a couple you are used to speaking both Arabic and English with each other.

Let me just quickly address your comment that “speaking both at the same time to the child maybe confusing”. Please do not worry, a child does not get confused by being spoken to in two languages. Not even if it is one parent speaking two languages. Bilingual parents can speak both languages with their children without causing confusion.

Your daughter will attend an English-speaking school, albeit with one Arabic lesson a day. This means that once she starts school, she will get a lot of English exposure, and will no doubt become fluent in it presuming she continues her education in English.

You mention that you know of bilingual parents who have chosen to speak English with their children, leading to the children not mastering the Arabic language. I can see this happening in a scenario where both the school and the home language is English and there is only a restricted amount of Arabic exposure. To become a confident speaker in any language it is vital that children have the opportunity, need and wish to learn to express themselves in it.

For the above reason, I would not recommend that you make English your home language. It is important that your daughter learns Arabic and communicates with her extended family and with friends in Arabic. This said, I do not say that you must stick to only Arabic either.

For now, I suggest that you continue speaking Arabic and English in the way it feels natural to you. You may find that you prefer to speak Arabic when you speak directly with your daughter, but then switch to English when you speak with your husband (same for him). This is perfectly fine and will not confuse your daughter. When she starts saying some words, she may initially mix Arabic and English, but this is also no reason to worry. Most bilingual children mix their languages to start with but soon get hang of what belongs to which language.

What I recommend you to do is to keep a close eye (and ear!) on her language preferences and your own choice of language. Once she starts school English may slowly become her dominant language, and she might prefer to speak more English at home. If this is the case, then I recommend that you increase the used of Arabic at home to keep the language balance. The important thing is that you are aware of the situation and react by changing your own language patterns to support her when necessary.

To be able to give you a more detailed response, I would need to do an interview with you to asses the amount of exposure to each language. This would fall under the individual Family Language Coaching. If you are interested in this option, please contact me.