Q&A: Bilingual twins – can parents influence what language they speak between them? 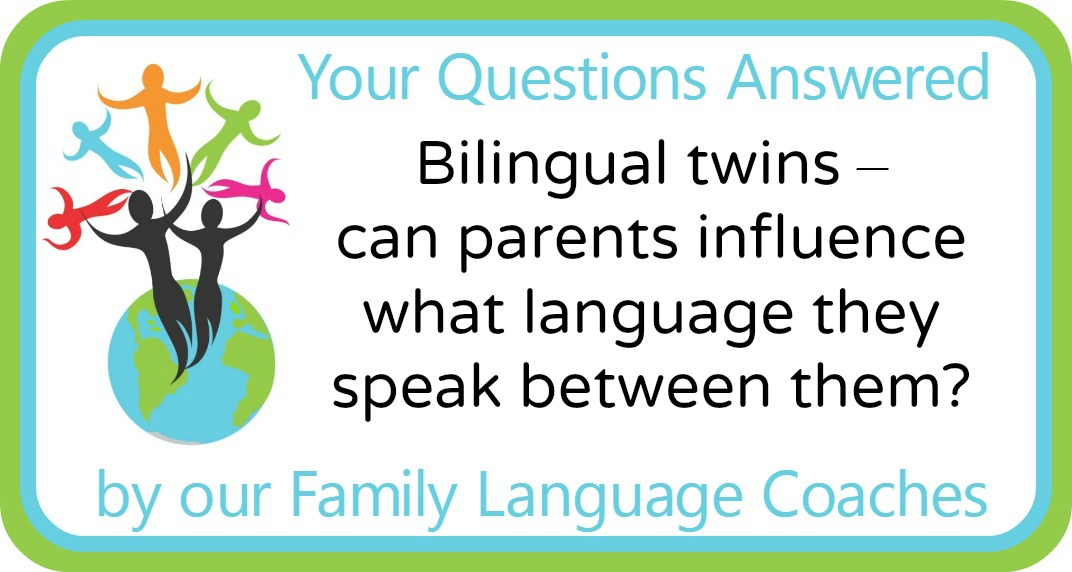 It is with great pleasure that I read every one of your blog entries.

I wasn’t brought up bilingual, but throughout education I have become fluent in four languages (and have passive knowledge of two more as well as two “dead” languages); as it happens, I ended up living outside my birth country and have become bilingual through a daily use and switching between my mother tongue and that of my host country. The wealth of knowing several languages have opened many doors (and borders) and made me more adaptable and employable than monolingual co-citizens. Not to mention the beauty of making “foreign” your own.

This time however, I would like to consult with you on a specific question. I am a mum of five-year-old twin boys. My husband and I share a common mother tongue (Serbo-Croatian) and this is what we speak at home; shortly after they turned one, we found a nanny who spoke with them a majority language of our host country (English). The boys have therefore become bilingual. However, they did not speak until two and a half and shortly after they started pre-school in English and so from very early on two of them adopted English as their language of play.

They now attend reception class at primary school and spend a big part of the day in English and when they return home they continue talking to each other in English. Because they play together both at school and at home, and this play is in English, I am worried they will lose their mother tongue gradually.

While I don’t want to interfere in their relationship and impose the language that they “have” to use, I am trying gently to suggest that at home we speak Serbo-Croatian and English at school and everywhere else. One of the boys is fine with this and wants to speak with his brother in SC, but his brother ignores him and responds in English, which leaves the first twin frustrated.

Are you familiar with experiences of other cases of bilingual twins and do you have any advice about how to preserve mother tongue at home (when one of the twins refuses to speak it with his brother and only uses it with me and my husband, but we don’t spend hours playing Star Wars with him as his twin brother does!)?

Thank you for your help and keep writing,
Ivana

Thank you for your question and your lovely feedback – happy to hear that you find my posts useful. It is feedback like this that keeps me going!

Since your bilingual twins are spending the day in each other’s company at school – at least partly speaking about the same things that they chat about at home – it is only natural that they continue using the language the talk at school. You can see an example of bilingual twins’ language use in this article from InCultureParent and this Q&A on Twins List. Also, as you say, convincing them to speak Serbo-Croatian while playing Star Wars may be a battle you are bound to lose.

The most important thing is – and I am sure you already do this – that you and your husband stay very consistent in your use of SC with your sons and also between the two of you. Children go through phases of being more or less fond of speaking a certain language, so you need to stay patient. My own (adult) daughters now speak English between them, but they still instantly switch to a minority language when speaking to me or their father, and they have kept their fluency in all their languages.

Have you tried asking the twin who is reluctant to speak SC why he thinks like this? Does he feel less confident in speaking the language? Has anything happened at school that may have affected his attitude? Also, have you discussed with him why it is important to you that you speak SC together? As adults we see the obvious importance and advantages of speaking a certain language. However, a child sees things more pragmatically in a particular moment and usually does what is easiest, most convenient or simply most fun.

It is great that at least one of your boys is fine with using SC with his brother – this will make it easier for you to introduce some activities that you can all do together in SC. I agree with you that trying to force the boys to use SC at home is not the right approach. Instead, try to come up with a compromise which is acceptable for both of your boys – yes, they can speak English when they play a game where that is the language used, but when you are all together, you would use SC.

You know your children best – can you think of something that they really want to do together as a family? Is there a game that requires communication and interaction which you could all play together? The idea is to create situations where there is a real need for speaking SC. What has been found to be most effective is if children spend time with other, monolingual children speaking the minority language – this may not be that easy to arrange without travelling, but keep it in mind.

Wishing you all the best on your quest to keep Serbo-Croatian an active language in your family – I am convinced you can do it!