Q&A: Can learning difficulties be due to bilingualism and how to assess this? 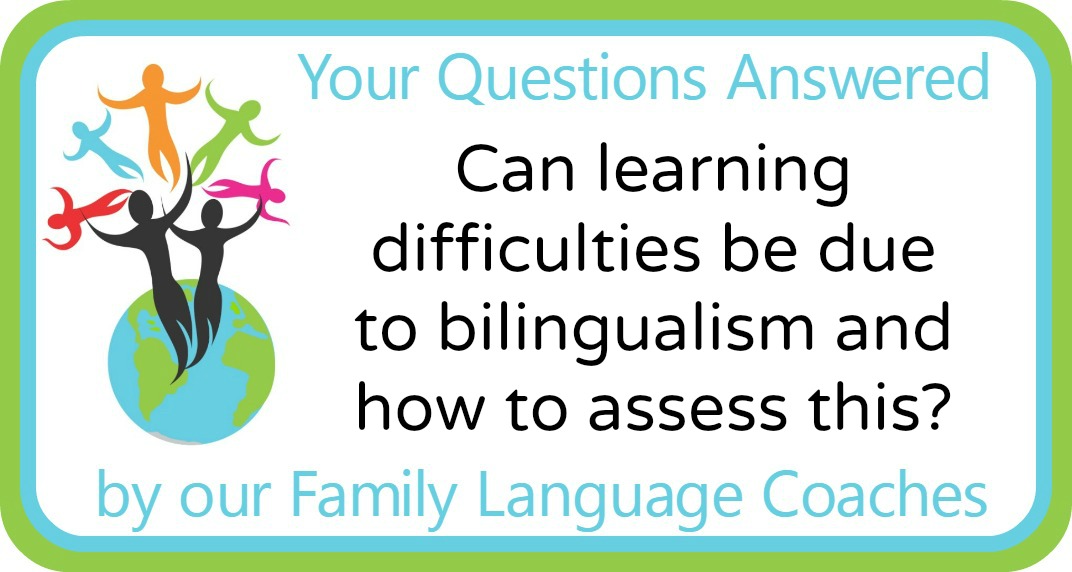 I am a school psychologist who has been asked to evaluate a student for special services that is also considered to be English Language Learner (ELL). He is currently six years of age. The records indicate that the primary language of the home is Spanish, both parents were born in Puerto Rico and speak fluent Spanish. The parents report that the child speaks English more than Spanish.

When this child was previously evaluated for special education it was determined that his academic learning issues were due to his being bilingual, despite the fact that he spoke and comprehended little Spanish. He has again been referred for a special education evaluation because he is making extremely poor academic progress.

So I have questions about when is it ELL and when is it a learning disability. This has been an ongoing question for years. The child currently does not appear to comprehend Spanish. He says his parents speak to him in Spanish and he doesn’t understand what they say. I asked a few simple questions in my limited Spanish and he didn’t have a clue what I was asking.

In English his spoken language is excellent, however, his ability to recognize and comprehend sounds needed for reading is very poor. He appears to mishear sounds and has little sound/symbol correspondence. His math skills are age appropriate. What is the best way to determine if it is an ELL issue?

Any assistance you can provide would be appreciated.
Raniece

thank you for your question. This is a complex topic and there is no easy or clear answer I’m afraid. First of all, bilingualism does not cause language or learning issues. The diagnostic concern here is to distinguish difference due to acquiring English as an additional language from language disorder and for this you need a speech and language pathologist (SLP) on board. There is a test for Spanish–English bilingual children that an SLP could administer. BESA assesses a range of language features in Spanish-English bilingual children up to age 6 years and 11 months.

There’s also an important distinction for children who are second language learners. Basic Interpersonal Communicative Skills (BICS) and Cognitive Academic Language Proficiency (CALP). BICS includes things like accent, oral fluency, and more subtle things like knowing when to use formal or informal forms. Research shows that children who start learning a second language (L2) after starting school can develop a good level of fluency in everyday conversation in 2 years. For getting to grips with the more formal language needed in school (CALP), it can take between 5 and 7 years for a child to ‘catch up’ with average monolingual children. These skills include those closely related to developing literacy (reading and writing) in both languages.

So this little boy is most likely a sequential bilingual child. Spanish being the language of the home and English being the language of education and at least some peer relations for him. There is another issue too though and that is of his home culture and the dominant culture of the education system of your country. In most cases, bilingualism is not the cause of underachievement in the education system. Colin Baker (I’d highly recommend his book: Parents’ and Teachers’ Guide to Bilingualism (Parents’ and Teachers’ Guides)

) makes some interesting points that are worth considering:

Firstly, expecting a fast conversion to the majority language by only using the majority language in the education system, Baker says, may do more harm than good because it tends to ignore the child’s skills in the home language and for bilingual children, their skills tend to be distributed across the languages. So some things will be easier in Spanish and other things will be easier in English. So I’d be curious to know how this boy’s achievements are being measured – in both languages. As for his literacy, I’d also be curious as to support for literacy at home, since lack of home literacy support may be a factor in underachievement. The mother’s educational experience and her level of English proficiency may also affect his language ability.

Thirdly, is the system of schooling: does it support the minority language or try to get English established as soon as possible? Is English the only medium of instruction? Attributes that may affect quality of education for language minority children include: the supply, ethnic origins, and bilingualism of teachers, balance of language minority and language majority students in the class room, use and sequencing of the two languages across the curriculum over different grades and reward systems for enriching the minority language and culture. An alternative view is that the school system should be flexible enough to incorporate the home language and culture for example, by including parents in the running of the school as partners and participants in their child’s education.

Fourth, often part of the explanation lies in factors outside the child, for example, socio-economic factors with immigrant children living in either urban poverty or rural isolation.

And as this child’s first language is Puerto Rican Spanish, any attempts to asses him in that language would require a Puerto Rican Spanish interpreter. And he would need to be assessed in both languages. Standardized norm referenced tests are used most frequently, but are usually not standardized on bilingual populations and are often used with a disclaimer that the norms may not be applicable to a particular individual for whom English may be a second or additional language. Also important too, though, is the recognition that performance on these kinds of tests are dependent on cultural familiarity with the materials. The instructions may not be perfectly understood or may require the child to carry out an unfamiliar task. In particular, vocabulary and story-telling skills are linked to a child’s prior experiences, leading to test scores reflecting life experiences and socio-economic status rather than language ability. But BESA mentioned above is designed for clients like this little boy.

In relation to testing, here are some other ideas from the literature:

Test beyond the ceiling and below the basal. Differences within tasks across languages may be caused by differences in the difficulty of items for each language. Children who speak languages other than English may not establish a basal at the expected level or may reach a ceiling sooner than expected, yielding low scores that are not representative of their knowledge. Testing a larger number of items will inform you of what concepts the child knows and which are more unfamiliar.

You can use what’s called conceptual scoring where you credit vocabulary items irrespective of the language in which they are produced. In cases where the child produces an item in both languages, they are credited only once.

The bottom line? Bilingual children need to be assessed in all the languages they use and in each of their interaction contexts (home, school, playground), involving a bilingual co-worker where necessary.

Hope this helps – please comment and ask any follow-up questions below.