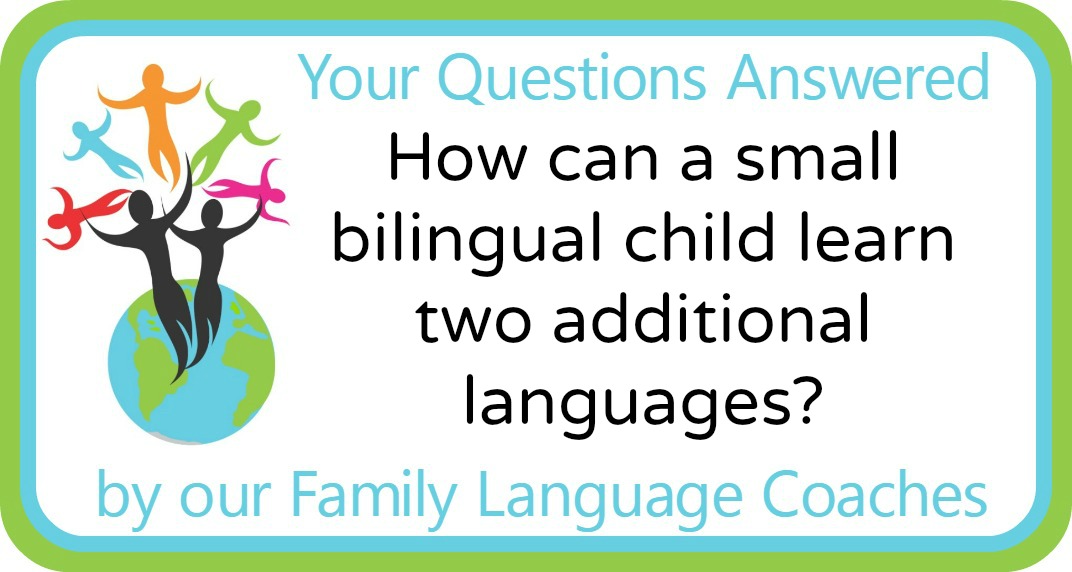 I would greatly appreciate your advice regarding raising a multilingual son in the following language environment:

I would like my son to speak English, Hungarian, German and Spanish. We live in the US, my husband is American and only speaks English. I am Hungarian and speak Hungarian, English and German at “mother tongue” level, and am conversational in Spanish and French.

My son is two and a half years old. He has been exposed to English and Hungarian from the day he was born. I am a full-time mom and speak mostly Hungarian with him, but when we are outside of the house (at preschool, playdates, grocery store) I speak English with him. Sometimes I speak English with him for a while at home, without noticing it. And when it comes to important parenting moments, I always switch to English.

I am attending several parenting classes, and am learning how to be a parent in English, and therefore it is difficult for me to convey important parenting messages to him in Hungarian. Also, when it’s the three of us at home: husband, son and I, or we are together outside of the house, I always speak English to my son because I don’t want my husband to feel left out.

This month he starts preschool, and the program includes Spanish lessons, so he will be exposed to a third language. When he was 20 months old, he had 20 words in English and five in Hungarian. At 28 months, he speaks three-word sentences in English and two-word sentences in Hungarian, and he knows and speaks nearly every word in both languages, so his language skills are roughly equal in both languages. For some words, he seems to have a preference in one language. For example, ‘red’ he always uses the English word, even if we had a whole conversation in Hungarian prior to that. For the word ‘uncle’ he always uses the Hungarian word.

1) Do you agree with our language practices as established or would you recommend some changes?

2) I would like to introduce German when appropriate. Can I do it now or is it better to wait a year or even longer?

3) Since I am the only one who speaks German in the family (my parents and sisters speak it too, but they only visit once or twice a year) – should I switch to German at some point, while we are keeping the Hungarian nanny 20-25 hours per week? Or should I keep speaking Hungarian, and hire a German nanny for 10-15 hours a week?

4) Also, if one of you is available for a conversation via Skype, I would appreciate it and would be delighted to compensate you for your time.

Many thanks and warm wishes!
Dori

Thank you for your message and for the detailed description of your family’s language situation. I already had the pleasure of connecting with you though a video call and I am delighted to have learnt to know you and your husband!

Your son is lucky to be growing up in such a language-rich environment and having parents who support him learning several languages. His two first languages, English and Hungarian, are developing well, so you have done a great job at arranging appropriate exposure to them.

I can understand your struggle between speaking Hungarian and English, especially since your husband cannot communicate in Hungarian. Having a Hungarian-speaking nanny has no doubt been crucial to your son picking up the language so well.

With regards to you feeling that you want to avoid that your husband feels left out if you were to speak Hungarian with your son when you are all together – this is something you should discuss with your husband. I know of many couples where the minority language parent avoids speaking his or her language of this very reason – and the majority language parent would wish that their partner spoke more of the minority language so they could pick up some of it, too. The problem is that the parents have never discussed this! As I know your husband has a positive attitude to multilingualism and does already know a little of several languages, he may well be perfectly fine with more Hungarian in the home.

I wouldn’t worry about your son mixing languages and preferring to use one language over the other for a specific phrase. This is normal bilingual child behaviour and he will by time learn which word to use in which language.

With regards to your questions:

1) At this moment, your setup is ideal for passing on Hungarian and English to your son.

2) You can introduce a little German through play, songs and rhymes, but at this point I would not yet start speaking German with him. He will already be learning a third language, Spanish, when he goes to school, and you might want to support him with this. We will discuss your priorities in more detail during our call.

3) The fourth language – in your case German – will require some additional effort from you. I understand that Hungarian is higher on the priority order than German, so I would not recommend that you switch to German at this point. If you manage to stick to Hungarian, then hiring a German-speaking nanny would be a natural way of introducing the language. You would then need to think about how to continue the German-exposure once the nanny is no longer needed. We will talk about the details of this during our next calls.

4) Thank you for asking. We have already had our first call and once I receive your completed questionnaire, I can put together a Family Language Plan for you with recommendations and next steps. After that we will have at least one follow-up call and further calls as and when you feel necessary. Looking forward to catching up!

Wishing you a successful multilingual family journey, speak to you soon!