Q&A: How to choose the additional language to teach a toddler? 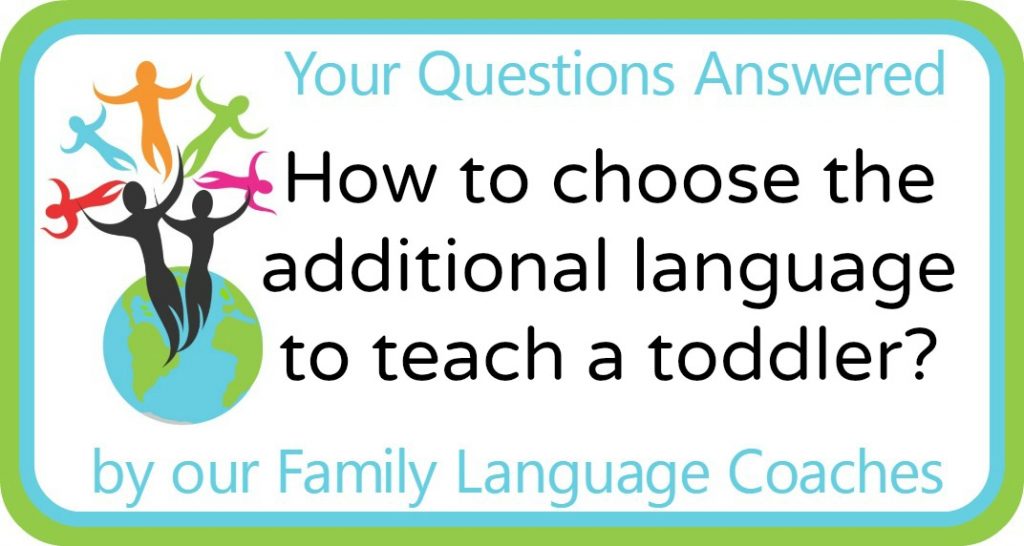 My husband and I have an 18-month-old son who we would like to raise bilingually in Austin Texas, USA, but we are having a hard time deciding which language to teach him.

Predominant languages in our city environment: English and Spanish
Predominant languages spoken in the family:
– Russian Father speaks English, Russian, and German fluently. He also can hold basic conversations in Spanish and French but does not consider himself fluent in these languages.
– American Mother speaks English and German fluently. Currently learning Russian and Spanish but cannot carry on a conversation in either language.

My husband has mixed feelings about teaching our son Russian because he fears it will not serve him and that he might be made fun of in school. Russia has never been a popular country in the eyes of America. My husband had a hard time with bullies when he was a child immigrant to the USA and worries that his own son may be similarly targeted or ostracized because he speaks Russian. My husband also doesn’t want to teach our son German because he had a bad experience living in Germany.

We both agree that being bilingual is valuable. However, I fear that teaching our son Spanish would be supremely difficult for us even if it would serve our son the best. Neither of us is confident in Spanish language. We are also worried about the cultural aspects. We are not Hispanic. We are outsiders to the culture, so we would not be able to share the cultural aspect of the language. We have a hard time mingling with Spanish speakers without reverting to speaking English.

We also worry that learning a second language can be an alienating experience. This is especially true if there aren’t very many people who speak the language in the environment (as is the case with both German and Russian here in Austin) or if the culture who speaks the language rejects your attempts to communicate (which could happen with Spanish language here in Austin).

How do you decide what language to focus on? How do you mitigate the cultural barriers of being alone in a language or not accepted by the culture?

Thanks so much for your feedback,
Iola

Thank you so much for your interesting and very thoughtful question. You bring up some very important aspects to take into consideration when choosing which language to pass on to your son.

You have the luxury of several languages to choose from when deciding which additional language you would like your son to learn alongside English. Whichever language you go for in the end, must be your decision, one which you both agree on. No one else can make this choice on your behalf, as you will be the ones to put it into practice. What I can do is to list the things you may want to consider with regards to each language.

However, before going into the specific aspects of passing on either Russian, German or Spanish to your son, I would like to offer some more generic thoughts on the situation. As parents we should always keep in mind that our children never grow up in the same circumstances as we did ourselves. For this reason we should also be careful not to project our own bad experiences too strongly on how we bring up our children. Yes, of course, we want to protect our children from anything bad happening to them, but when making a decision, we should ask ourselves: “Is my past restricting the future of my child?” We can never (and actually shouldn’t) shield our children from all negative experiences. What we can do is to stand by them and support them should anything happen.

I am not quite sure what you mean by “learning a second language can be an alienating experience”. As you mention, you already live in a bilingual community. Being able to speak two languages (English and Spanish) is common, especially when Spanish is part of your heritage. This would be like your son speaking English and Russian. Also, your son would not be learning Russian (or German), he would be acquiring it naturally while growing up. Children (and adults for that matter) can pick on others who are different in any way – be it the way they look, behave, speak, dress or any random difference. We cannot prepare for all the possibilities. We can however instil confidence in our children and their identity.

With regards to your language options:

In contrast to his father, your son is growing up in the US, he will be integrated into the society from the start. He will not have to go through the same process as your husband did when he was a child. While I understand your husband’s hesitancy to pass on Russian, your son has a Russian heritage. Choosing not to pass on Russian to him would restrict his opportunities of exploring that side of his identity. The fact that you are learning Russian, means that you could still understand a great deal of the discussions – and it would considerably speed up your Russian learning if you were to hear the language at home. On a more general level, Russian may not be popular in the US now, but it is still an important world language. There will always be need for fluent Russian speakers – and, the less people choose to learn it, the bigger the need.

As both you and your husband are fluent in German, this would be a great opportunity to pass on this language to your son. Just like Russian, fluency in German could be a great advantage for your son’s future career. You do not mention if either of you have German heritage – if you do, then this would be another reason to choose it as the additional language. However, since your husband seems to be very strongly against this, it may not be an option. As I mentioned above, it is vital that you both agree on the language choice. If anyone of you is not happy with the choice, it will make it so much more difficult to go through with whatever you decide.

I can see the point of Spanish being a useful language to learn, as it is widely used in your community. However, since neither of you is fluent in Spanish, it would be a big undertaking to choose this language. You need to both be 100% committed to it should you go for this. It will require significantly more investment in time from you, both in terms of learning the language and embracing the culture. You would also not be able to implement this in the family straight away. Most likely you would need some outside help. Until you become confident in Spanish, you would continue speaking English. The longer you wait to switch a language, the more difficult it is (please read my article: Passing on a non-native language – considerations for further things to take into consideration with regards to choosing Spanish as the additional language). Also keep in mind, that even if you were to choose Russian (or even German) now, your son will have plenty of chances to learn Spanish later. You may even want to consider enrolling him in a dual language school – depending on what is available in the community.

I hope my response has helped you to decide. If you wish to discuss this in more detail, please contact me and we can arrange a family language coaching session.