Q&A: How to choose the languages for a baby in a multilingual family? 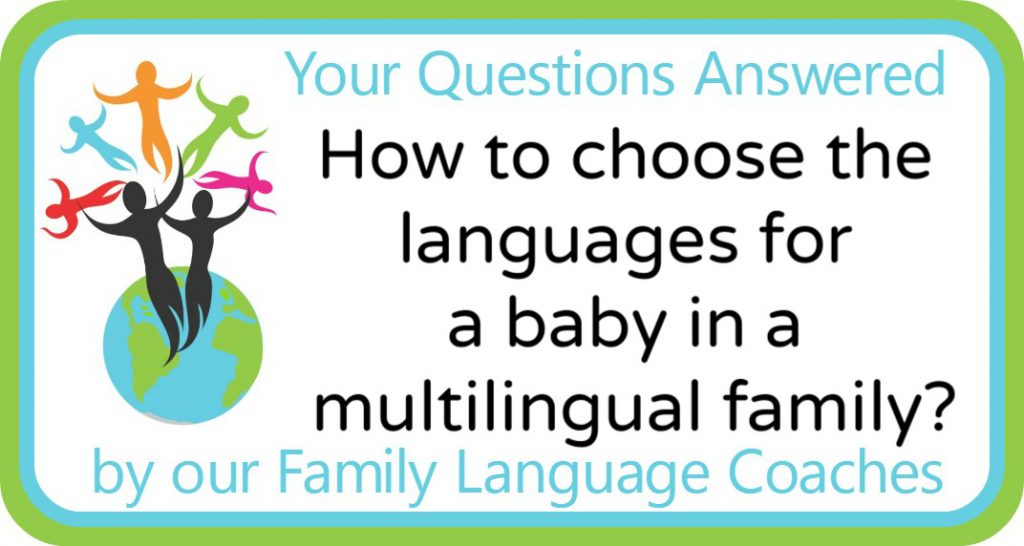 I have a question about raising our first born (due in two months) multi-lingual which I was hoping you could kindly help us with. My wife is Ukrainian and speaks Russian (native) and English (not fully fluent, but quite good – perhaps level B2). I am Dutch and speak Dutch (native) and English (fully fluent). Together we speak English to each other. I don’t speak Russian, but my wife is learning Dutch (level: A2/B1).

We live an expat life where we spend 6 months to 1.5 years in a country and then move to the next country (countries can be anywhere depending on my work: e.g. countries in Asia, Africa, Middle-East and Europe).

We initially wanted to raise our baby boy trilingual (Russian, English, and Dutch). However, as it is our first born and we don’t want to unnecessarily over-complicate it for the baby and ourselves (i.e. ensuring that we really invest in the development of each language through reading stories, songs, speaking time, etc.), we decided to invest the most time in the languages that will be the most functional for the baby. This will be English foremost as we are already used to speaking in English to each other (and therefore will not require us to go against what has become natural for us in communicating in our personal lives) and our child will most likely go to an international (pre)school in the different countries where we will move to.

Secondly, we also want to include Dutch as our child will be Dutch as a nationality and there might be (although a small) chance that one day we may move to the Netherlands and that the child will go to school/study there. Lastly, Russian for us is a ‘nice-to-have’ but may be less functional than English and Dutch as we are aware that the amount of exposure to Russian while abroad may be limited and there are no likely plans of us moving to a Russian speaking country.

The way we thought to go about this is by:
– I will always speak Dutch to our son (as this is my native language) and will ensure to read stories in Dutch, watch cartoons in Dutch, sing songs in Dutch, and generally just talk a lot in Dutch to/with him.
– My wife will always speak English to our son (as her English is quite good – although not fluent – and much better than her Dutch at this moment. Also taking into account that our son’s English will probably grammatically improve naturally through the international schools). She will read stories in English, watch cartoons in English, sing songs in English, and generally just talk a lot in English to/with our son.
– My wife and I will always speak English to each other (but when responding to the child in a family conversation or when saying general statements like: e.g. “let’s go to the park today”, my wife will speak English and I will speak Dutch).
– In order to allow sufficient time for Dutch as well, my wife and I will speak Dutch (instead of English) to each other in the weekends (Saturdays and Sundays).
– My wife will put on Russian music, will Skype with her family and friends in Russian, and will sing Russian lullabies to our baby for the baby to pick up some Russian passively (although we are conscious of the fact that the time investment in Russian will be minimal compared to the other two languages, but we are okay with this as this for us is the least functional language for the baby).

1) Does the above seem like a good approach and does it align to current best practices in raising children multi-lingual?

2) If my wife and I switch to speaking Dutch to each other in the weekends, should my wife then also speak Dutch directly to the child or should she stick to speaking English to the child (OPOL approach?) while only switching to speaking in Dutch to me (instead of in English as during the working week)?

3) Are there any other tips, advice, or pitfalls we should be mindful of in our circumstances?

Our baby boy will be born in the Netherlands and we are planning to stay in the Netherlands until the baby will be 6 months or so (I will take off from work during these 6 months to focus on my wife and the baby). Once the baby is 6 months we will start moving again to another country (unknown specific location until now, this will depend on my work – as I am working for the United Nations).

We look forward to hearing from you on this. Many, many thanks for your support (we tried to research a lot on the internet about this but couldn’t clear up these questions for us)!

All best,
Roy and Anna

My warmest of congratulations on the arrival of your baby son, who I now know was born this week!

I am impressed by the amount of thought you have already put into planning your son’s trilingual upbringing. Thank you for sharing your thoughts on how to ensure that he grows up to become a master of many languages.

Your plan is for you to speak Dutch and your wife to speak English with your son. Your common language would be English except during the weekends when you would switch to speaking Dutch with each other.

1) You wonder whether the above is a good approach. It is one of the most common approaches that parents use to pass on two languages: one parent, one language, so yes, it is a well-established strategy. Switching your and your wife’s common language to Dutch during the weekends would increase the amount of exposure to Dutch for your son.

2) As your wife is not yet fluent in Dutch, I would recommend that she sticks to English when speaking with your son, so not to make it too complicated for her to communicate with your son.

3) With regards to other advice, I would invite you to carefully consider the importance of each of the languages in your family. Let me explain in more detail:

You are fortunate to have the luxury of choice between Dutch, English and Russian. You have decided to go for Dutch and English, as these will be, in your words, “the most functional for the baby” and that Russian would be a “nice-to-have”. Please keep in mind that Russian will always be part of your son’s heritage – it is the language of most of his mother’s side of the family. To know Russian would allow him to have a closer connection with his maternal grandparents and other relatives. Also, should he ever want to learn more about his background or visit Ukraine, knowing Russian would be a great advantage.

Although your wife is “quite good” in English, it is not her mother tongue, and she may not have had the chance to use English with small babies and children before. Most likely it would be easier and more comfortable for her to speak Russian with your son. Baby talk, lullabies, animal noises, specific idiomatic expressions, speaking about her own memories of childhood – all this would be easier for her in Russian. If you would like your son to learn Russian, the best time to start with it is now. From experience, I also know that children often regret that their parents did not pass on their mother tongues to them. Don’t take me wrong though, many parents choose to speak a language other than their mother tongue with their children, so this can definitely be done.

One of the reasons you give for not choosing Russian is that it “will not require us to go against what has become natural for us in communicating in our personal lives”. Even if your wife were to speak Russian with your son, you could continue speaking Dutch with him and English with your wife. Three languages in the family is not too much for a small child, as many trilingual families – mine included – can vouch for.

The only thing that would be a big change, is that you would not understand everything what your wife speaks with your son. (A lot can be understood from the context to start with.) His first word might also be in Russian. Would you be okay with this? I was in exactly this position when my daughters learnt Punjabi from their father. However, I am so pleased I insisted on them learning Punjabi, as it has made a big difference in their relationships with their father’s side of the family and in understanding that side of their identity. By hearing Punjabi, I was also able to pick up a lot and can today understand everyday discussions, and even say the odd sentence.

With you living an international life, your son will probably attend English-speaking schools. As you will move away from the Netherlands before he is one year old, his whole education will most likely be in English in the international schools, so this will inevitably become his strongest language. For this reason, it is not necessary for your wife to speak English with him now – he will learn it later. He will also pick up a lot from you and your wife speaking it together.

Passing on three languages as per above is not too complicated for your son. It is more a question whether you as parents are happy to proceed this way. It is important that you discuss this together and make sure that no one feels left out or finds it too hard to communicate. You need to make a decision that suits all of you. If you would like to have more support and have a Family Language Plan set up, please get in touch and I can send you more information.