Q&A: Choosing the family language strategy after a move: when the minority language becomes the majority one. 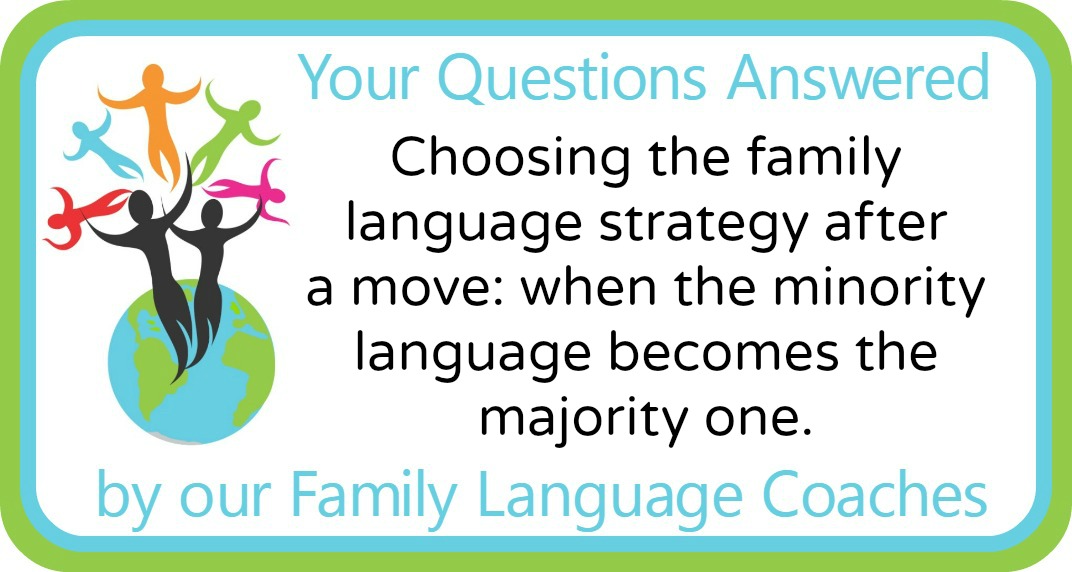 Thank you for your wealth of knowledge and great posts! So far bilingual has been easy, since both my husband and I are German and we live in Texas. We both speak our native German with our almost 2-year-old daughter and with each other. She learnt and spoke the majority language English in Texas at daycare, the playground, pool etc. and both her languages came along fine. She is starting to form easy sentences in both languages. Still mixing languages of course. By the way, she switches languages to enforce her point, like first saying ‘no’ in English, if we still insist she needs her diaper changed or whatever the disagreement is about, she will use the German word ‘nein’.

We are now moving back to Germany, so the majority language will change and no automatic exposure to English will be present. Both my husband and I want to keep her English, thus will decide to do a variation of minority language at home and/or time and place. To me English is part of my daughter’s heritage, being a born Texan. We are both pretty fluent though, there are occasions when we struggle to find the correct word. We have both lived and worked in the USA for over 4 or, in my case, 5 years. We think we will switch the family language for our daughter. We plan to speak English both to our daughter and between us, once we arrive in Germany.

Do you have any experience or tips for similar situations? I am a little concerned that since the neighbourhood we will move to has a high percentage of people for whom German is not the first language that the quality of my daughter’s German will not be as good as I want it to be, but figured once she is five or we see it becoming an issue for real (not just in my head) one of us could switch back to German. I’m also a little concerned that we might miss our mother tongue, but think we need to give it some time to get used to.

Thank you for your support!
Sibylle

Thank you so much for your kind feedback and for your question. By now you will already be in Germany (due to the many questions coming in, there is inevitably a delay in getting a reply) and you may have made up your mind on what family language strategy feels best for you. I will however give you some food for thought on which aspects of the situation to keep in mind.

As you say, you have different options to choose from, which I will list below:

Using mL@H would mean that both you and your husband only use English at home. This is statistically the most efficient way for a child to grow up bilingual. However, as you say, in your case this would mean that both of you give up on speaking your native language with your daughter, and I can understand your concerns about missing your own mother tongue.

You mention that you are “pretty fluent” after spending 4-5 years in the US, so as such it would not be too difficult for you to start using only English at home. As you are moving away from the US, do you have plans for maintaining and developing your own English skills?

You also state that there will be a minimum amount of other English exposure for your daughter. This means that the two of you will be your daughter’s English role models and the way you speak will be how she will learn it after the move. This includes vocabulary, grammar and accent. You may encounter those who tell you to only speak your mother tongue to your child so not to pass on any mistakes – however, I am not one of those. You have a fantastic opportunity to give your daughter the gift of another language and it is a case of finding the best way to do it.

It is possible to work on all language aspects as she grows up, and you are likely to find other situations where she can interact with native English speakers. She also has the advantage of having learnt and been exposed to English at a very young age, which means that her accent is probably better than yours at this point. You may want to explore options for playgroups in English and later look into the options of enrolling her for bilingual or international schools. As she grows, there will be plenty of TV programmes and films she can watch. With the minority language being English, there is an abundance of online resources available for free.

I would not worry too much of her growing up in a community where other kids may not have German as their mother tongue, she will become proficient in German in any case. The deciding factor about choosing mL@H is whether both of you are happy to speak English with your daughter all the time.

One parent, one language (OPOL)

If one of you is more confident than the other in speaking English, you could choose to split the languages between you and choose OPOL. In this scenario I would recommend that you make English the common language at home, and it is vital that the parent speaking German is fully supportive of this and takes the lead in making sure English does remain as the language you speak when everyone is together.

OPOL will inevitably be harder for the parent speaking English as the full responsibility for the exposure falls on them. It will probably also not get easier by time, as when your daughter gets immersed in German through daycare or school it will quickly become her dominant language.

As with mL@H, the question is whether the English-speaking parent is happy with the language choice.

You mention the time and place approach as one of the options and I could see this working in your family, as long as both parents fully commit to it. You could switch depending on whether it is morning or evening, weekday or weekend or alternate every one or two weeks. This strategy normally works best in scenarios where the languages are fairly equal in terms of general exposure (e.g. in families where there is more than one minority language).

The positive side of this approach is that both of you will get the opportunity to use your mother tongue, German, with your daughter. You can also opt to speak German in scenarios where you do not feel comfortable in using English. At the moment, the discussions you are having with your daughter are fairly straight-forward, but as she grows older, she will ask you deeper and more difficult questions, which you may want to be able to answer in your mother tongue.

As mentioned above, this could work for you, but both of you do need to stay committed to it, so not to allow German to take over altogether.

There is also the option of both of you switching between English and German, two parents – two languages, without too much structure, but making sure that both languages are used in roughly equal measure. This is not an approach that gets talked about much, but Professor Annick de Houwer found in her research of more than a thousand multilingual families, that the strategy was statistically slightly more successful than OPOL. Ideally, when using this approach there would also be exposure to both languages in the community. As per your description, this may not be the case for you.

Whichever your choice is, remember that if it does not feel right, you can change or adjust your family language strategy at any point. You may want to start with mL@H to make sure your daughter maintains her English skills. Any cartoons she watches can be in English and if there are any English-speaking playgroups, that would be a perfect addition to the exposure. Speaking English with other kids would be a great boost for her.

If you however start to feel overwhelmed by only using English with her, or when she grows up and the discussions get more involved, you may want to think about at least occasionally switching to German, or to apply one of the other family language options mentioned above. Whatever you decide, it should feel right for you, and you should be open to the thought that what feels right may change, and that is also okay.

Wishing you all the best on your multilingual family journey!