Q&A: How to correct a trilingual child’s pronunciation? 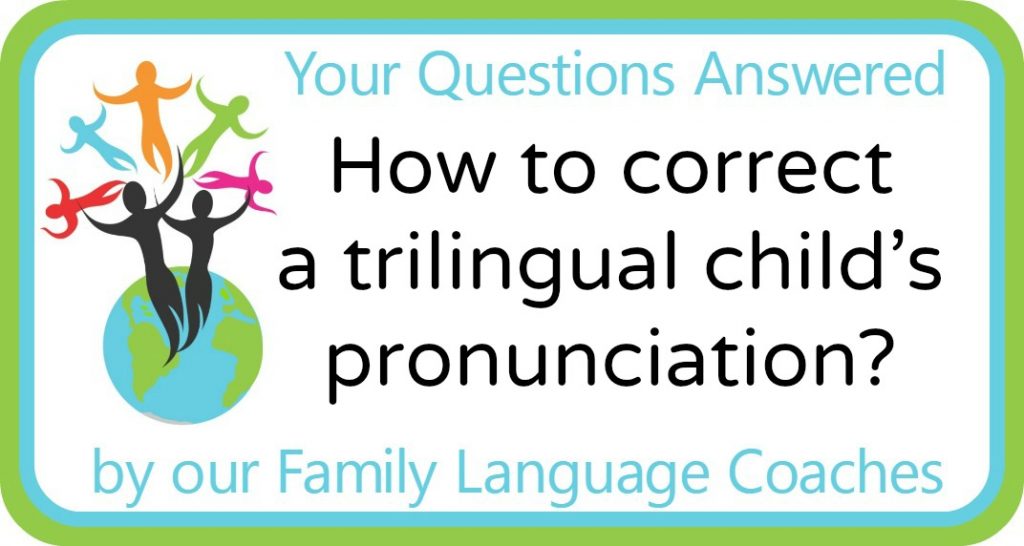 My husband and I live in Belgium and before the birth of our son we were speaking English to each other. However due to our complex family and cultural situation we decided to step away from English and limit the languages to three only.

Our son is now 18 months and since his birth I have been constantly speaking to him in Bulgarian, while my husband is speaking to him in French. To each other we speak Dutch which is also the environment language and the language at the daycare. Sometimes when we have my family visiting the common language is English and sometimes it happens my husband’s family is speaking Spanish, we do try to limit English and Spanish as much as possible.

In the last weeks we noticed that our son is trying to pronounce some words in Dutch which are not exactly correct, and I would very much like to help him by correcting, but I am not sure if this wouldn’t confuse him more and if it is isn’t in contradiction with the rule One Parent One Language.

Furthermore, we noticed that for some items he recognizes only the Bulgarian word. Basic commands connected to putting on clothes, changing diapers, putting on shoes, etc. he understands easily in all three languages. He can say if he doesn’t want something.

Could you please provide advice on how to ensure that our son is learning to pronounce the words correctly in the chosen three languages without jeopardizing the basic rule One Parent One Language? Should we just stick to the rule and ignore mispronounced words by saying the correct word in the chosen language? At the age of 18 months it doesn’t matter that he says words wrongly, but later on when he begins school that might be a problem.

Looking forward to your answer and appreciating your time!

Thank you for your question.

The best way to help your little boy is by recasting. What’s that? It’s where you repeat the word correctly after him a few times. The idea is that children need to hear a clear model of the adult version so that they can store it correctly in their brain and then produce it. If you get them to say it ‘correctly’ they have lost a chance to hear a good model. And anyway, at 18 months, most children are saying it correctly for their age and stage of development. They usually have the word stored correctly so if you repeat the incorrect version after them, they think you have a problem because as far as they’re concerned, they’ve said it correctly. And you have a hearing problem!

What does recasting sound like? So, your child says I want my tar. (They mean I want my car). Then you say You want your car? Where is your car I wonder? It’s a blue car. I can see your blue car. You love that car. Five opportunities for them to hear the word and no struggle over trying to say it right. This is genuine communication and speech/language learning in action.

You are following a one parent one language (OPOL) approach and are wondering how to model correct pronunciation in all of the languages while still following an OPOL approach. Taking an OPOL approach doesn’t mean that you’ll never use the other language with your child or in their presence. That’s okay. Your son is used to hearing you speak Dutch around him, so I think it’s fine to model correct pronunciation of the word in his target language. Even if you have started the conversation with him in Bulgarian. But it does depend on how you feel about it.

Children are wired to acquire languages and the languages do interact – that’s typical development for multilingual children. Children do tend to mix the languages to the extent that they hear it around them. And in relation to school, they also learn when it’s okay to mix (for example in casual conversation with friends) and when it’s not (when they’re doing school work or talking with the teacher). They learn these rules of language use as part of their overall speech and language development.

You also mention how for some items, he only recognises the word in Bulgarian. This is not unusual as children’s language skills tend to be distributed across the languages that they are exposed to. They will know the word in one language and not the others.

Here’s a little video I made about recasting. And a blog post with more information about multilingual children’s speech development.

All the best to you all!