Q&A: How will having different school languages affect the sibling relationship? 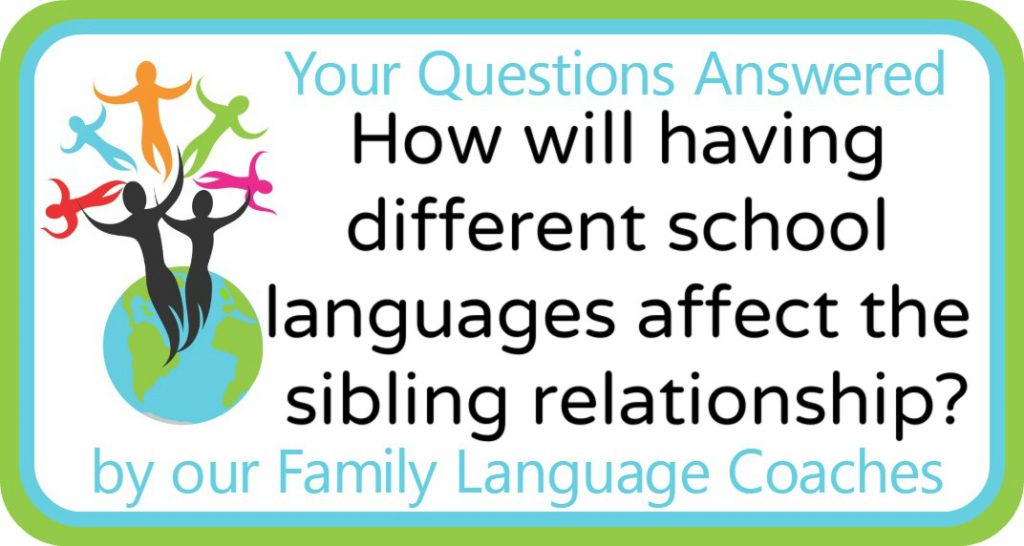 We are a trilingual family and our situation is quite complicated. My husband is Japanese, I am Taiwanese/Australian. We have two children a 4-year-old boy and a 7-year-old girl. I speak native Mandarin and English and conversational Japanese, but I mainly only speak Mandarin with my children. My husband also speaks English, but he speaks only Japanese to the children. When my husband and I speak we mix English and Japanese.

Our problem is, the children spend most of their time with me so their Mandarin is very strong, but Japanese a lot weaker. My daughter now goes to Japanese school in Shanghai, so she is picking up her Japanese and my son will go to English based kindergarten in September. This is the complicated part where our children are learning different languages at school. I would like to consult you on:
1. Is this a bad idea?
2. Will there be conflict between the children as they grow up?
3. How can I plan this so that they grow up as trilingual?

I have a strong concern about my daughter’s unwillingness to speak English. She seems to understand quite a bit but is very shy to speak English. We lived in Singapore last year and my daughter had one semester of international school learning English. That’s where she picked up some English but now she goes to Japanese school in Shanghai.

My son only speaks Mandarin and sometimes pops out a few words of Japanese when he really has to speak to his father. He will go to international school learning English.

I am hoping my two children will help to grow their three languages together. Also I am worried whether I have made a bad move to put them in different schools. I have asked many multilingual families but can not seem to find an answer.

I appreciate your time in reading my problem and hope to receive your reply.

Thank you so much,
Julie

Thank you for your question and for sharing your family’s language story with us.

When it comes to deciding on a school, the first thing I always emphasize is that you should select the one which will give your children the best education in your current circumstances. School languages are important but selecting a school which meets with your expectations with regards to quality of teaching, values and a supportive atmosphere should be your first aim.

1. Whether choosing different school languages for your son and daughter is a bad idea, is a question only you can answer. As I mentioned, you would have had your reasons to choose these schools, and I would not be able to comment on it based on the information available. Can it work? Yes, of course it can, and it most likely will, but there are certain things you need to take into consideration, as I will explain below.

2. Could the school choices cause conflicts between your son and daughter? Again, there are so many factors playing a role in a sibling relationship, that this is another impossible question to answer. Do I think having different school languages will inevitably negatively affect their connection? No, if they generally get along well, I can’t see it making a deciding difference. One thing you do need to take into consideration though, is that it is not only the language per se which is different. An international school’s cultural upbringing will be different from that of a Japanese school. Your children may get different habits, attitudes and world views through their education. It is your role as a parent to make sure that these differences do not hinder a good connection between your children.

3. I would recommend that you and your husband discuss your trilingual plan for your kids. What are your priorities when it comes to the three languages? Mandarin is currently their strongest language. If you stay in China, it will most likely continue to be their most dominant language. School languages will however have a big effect on their language skills. Whichever language they use in their education will soon become one of their strongest languages.

This means that English would become your son’s second dominant language and Japanese your daughter’s. Are you happy with this outcome? Unless your son gets some additional Japanese exposure – either through your husband or in some other way (e.g. classes), there is a chance that we will continue to be reluctant to use it. Without knowing the exposure times and other factors in more detail, it is not possible to know exactly. This is something which we could delve into during a Individual Family Language Coaching process. How would your husband feel if your son could not express himself in Japanese when he is older? The answer to that question will determine whether you need to take some action to support his Japanese skills.

With regards to your daughter – even if she did attend an English school for one semester, this would not have made her a confident English-speaker if she did not use the language regularly in any other setting. Her unwillingness to speak English is perfectly natural – she knows Mandarin and Japanese better and those are the main languages she has spoken with you and her father. Children are very pragmatic with their languages – there is no need for her to speak English with you, so she avoids it. Just like with Japanese with your son, if you want your daughter to become a fluent English-speaker, she will need more exposure to it. You could for example consider switching to English for some of the time with your daughter to help her get more confident in the language – i.e. use the Time and Place approach.

I can understand that you haven’t had feedback on your situation from other families, as this is not something many parents would have experienced. I hope my answer helps you to reflect on the various aspects of the school choice. If you have any further questions, please, add them in the comments below.