Q&A: Is a dual-language school a good choice for a bilingual child to become trilingual? 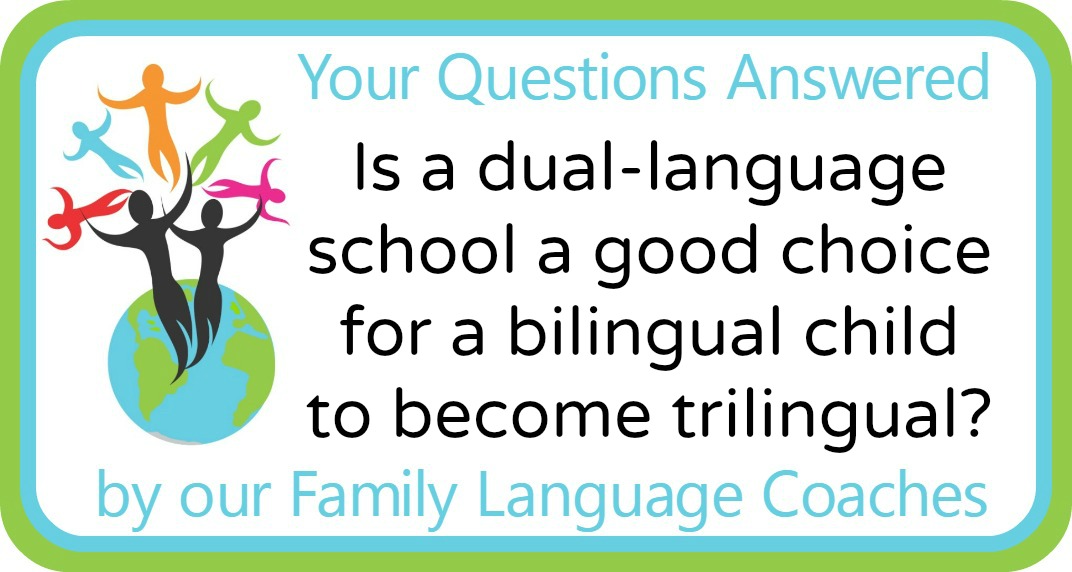 My wife and I are native Russian speakers living in the United States. Our son is turning five in a few months and will start school. Our home language is 100% Russian. Our son speaks Russian at or slightly below the level of his peers in Russia and can interact with English speakers because he has attended half-day preschool for a couple of years, although he is less comfortable speaking English. He also knows some basic Spanish vocabulary from his Spanish lessons at preschool.

Now we have an option to send him to a two-way bilingual program with 50%-50% instruction in English and Spanish. They claim that kids gain equal proficiency in English and Spanish by the end of elementary school. The Hispanic community where we live is huge, so Spanish might be a good bonus for him in future.

We have, however, some concerns:
1) He still makes grammar errors when he speaks Russian and I’m afraid he might be behind his peers in Russia but I cannot be sure
2) His English skills are definitely worse than those of his American peers
3) Neither my wife nor I know Spanish

I understand that the prospect of sending your son to a bilingual school is very tempting and the area you live in seems to be highly bilingual – Spanish and English – which would support both languages also outside of school.

I also understand that you are worried about your son being behind his peers in Russia. I hope you don’t mind me asking this: Do you intend going back to Russia and would your son attend a local school in Russia?

I totally understand that you expect your son to be at native speakers’ level in Russian and I wonder if there is any school – maybe weekend school? – he could attend in your area to support him with Russian once he starts going to school?

Placing him in a dual language program from the beginning will help him with both languages, English and Spanish. I wouldn’t worry about his “limited proficiency” in English: your situation is a full immersion situation i.e. he is exposed to English every day and he will learn English at school.

I hope you don’t mind me telling you this, but please don’t compare your son to monolinguals. Neither Russian nor English monolinguals. Your son has the unique chance to grow up with multiple languages and he is still acquiring and learning them. Becoming (nearly) native fluent in a language requires 6-8 years, so he has quite some time to become fluent in all three languages and he will need all your possible support and encouragement.

I suppose he has been assessed at preschool: did you know that usually these assessments are made for monolinguals only? And that they give a distorted picture of what the child really knows and understands? If a child doesn’t respond in a “right” way to questions during the assessment, this doesn’t mean that he didn’t understand the question. He might just not find the right words. Or if he didn’t understand the question, if asked in one of his other languages, he might have given a very appropriate answer! I would be very cautious with these tests and always ask what kind of questions were asked… I would love to give you more information on how to handle these situations but it would take too much space here.

You mention that neither you nor your wife speak Spanish. Wouldn’t it be an opportunity for you both to start learning Spanish alongside your son? You would not only help him become more confident in learning a new language but you would also show him that we all learn our whole life and it’s never too late to learn something new.

You wonder if your son wouldn’t be better off in an English school. It might be the better option if you want him to fully concentrate on English. I would consider another point aside from the language: would there be other bilingual children, other children with a diverse cultural and linguistic background in that school or would he be the only one or part of a minority? What is the support offered to non-native speakers in that school? Is there a program that offers EAL (English as Additional Language or ESL English as Second Language)? This might help you decide.

As for the English: he would certainly catch up with it and with additional Russian classes in the future he would become fluent in both languages. Does the curriculum in this English school also provide Spanish lessons at some point? If so: at what age?

Sending him to a dual language school where he also learns Spanish from day one would have the advantage for him to learn this additional language from a very early stage which is a great advantage when it comes to pronunciation. In the beginning, he will seem to run behind others as neither of the two languages is his family language, but he will catch up eventually. I imagine that the school has a language support program, i.e. a support for EAL or SAL (English as Additional Language and Spanish as Additional Language)? I would ask the school how they support children who don’t have Spanish and/or English as family language.

I personally wouldn’t worry about the English. As I mentioned before, by living in the US you are fully immersed into English and he will catch up with peers. As for Spanish: he might get Spanish friends and learn it from his peers at school too.

I hope that I could help you with my questions and my insights. If you have further questions and would like to discuss this further and more in detail, please contact me and I’ll be happy to help you.

I wish you and your son all the best!