Q&A: How to encourage a child’s minority languages and arrange language exposure? 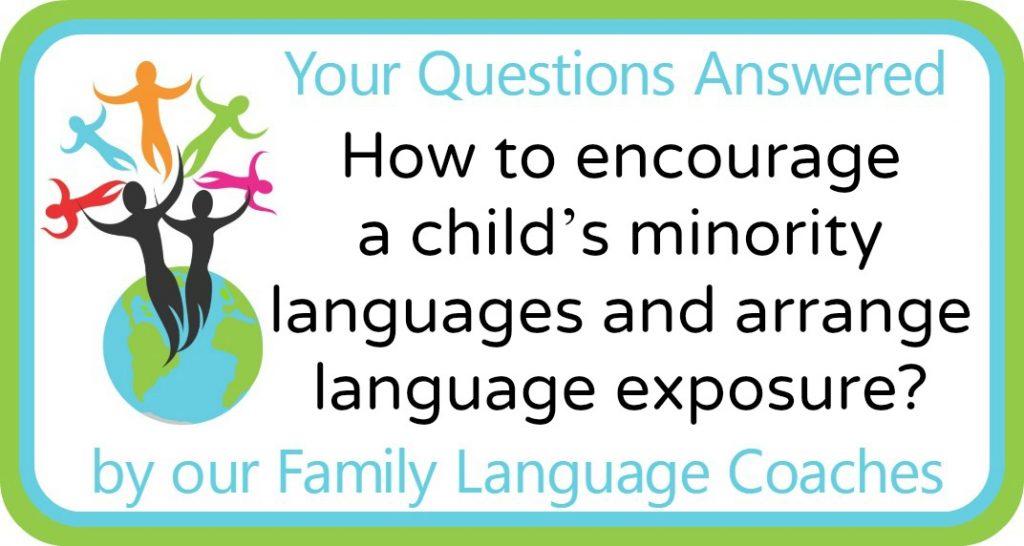 I am a Spanish native speaker living in Canada with my Jordanian husband and h little boys aged almost two and five. At home we speak three languages: me Spanish, husband Arabic and all of us English. My husband and I speak English to each other. I speak Spanish to our kids and he Arabic. He does not spend much time with the boys and their Arabic is minimal, but he is trying.

My oldest is fluent in English and understands Spanish 100% but does not speak, except few words when I ask him to tell me in Spanish or repeat after me. He will start French immersion Kindergarten in September and I am wondering how to handle all the languages and how to encourage him to speak more Spanish. I would like him to improve his speaking before he starts Kinder.

None of us speaks French at home but wanted to take advantage of the choice we had to place him in this program which is directed to non-French speaking families.

However, most of the time I will find myself talking in English without noticing and once I do I swap immediately.

Our youngest does not speak yet and we think it is because all the languages spoken at home. He has only few words and sounds of things to let us know what he wants, he understands though and follows instructions mostly in Spanish. How can I encourage him to start talking? I show him objects and tell him what it is and ask to repeat but he will just babble or says papa.

Thank you so much!
Tatiana

Thank you for your question about your multilingual family language setup. You will soon have four different languages to juggle in your family, so it is good that you are thinking about how to keep them all going.

I will start by commenting on each of the different languages and what you need to take into consideration:

During your normal day-to-day life, you are presumably the only person speaking Spanish with your children. All the Spanish they learn, will be from you. I take that it is important for you that your sons become fluent in Spanish, and you wonder how to get the older son to respond to you in Spanish instead of English. I note that you write that “most of the time I will find myself talking in English” and herein lies a big part of the answer. Your son needs to get used to speaking only Spanish with you, otherwise he will continue to use the language which feels easier to him – which now seems to be English. So for your son to use more Spanish, you need to work on your own language choices – read this article for or ideas on how to stay consistent in using Spanish. Now is the time to establish a solid routine of only speaking Spanish with him (and your other son). It would be great if you could immerse your sons in Spanish for a longer time during the summer – would it be possible to arrange a visit to Spanish-speaking relatives or friends?

Just as you are the sole language exposure for Spanish, I presume your husband is for Arabic. Without further details about exactly how much exposure your sons get to the language, it is difficult to predict whether they will learn to speak it. This is something you and your husband should discuss, so that you are aware that with minimal exposure – which seems to be the case at the moment – they may learn to understand Arabic, i.e. acquire a receptive skill in it, but they are unlikely to speak it. If it is important that they also learn to master Arabic, you would need to think about additional exposure in some form, e.g. private tuition or language classes.

You do not mention which language is dominant in the part of Canada you live in, but I presume it is English, so there will be plenty of English language exposure, not only as the common family language, but also from the media and the community in general. Your sons will become fluent in English, so there is no need for any additional exposure to it in the home. On the contrary, try to stick to Spanish when you speak directly with them to minimise the amount of English in the home.

When he starts Kindergarten, French will become your eldest son’s fourth language. Since neither you, nor your husband speak it, he will get all his French language exposure from there. Providing that you can arrange further schooling in French after the Kindergarten, he will also become fluent in this language. If his further education will be in English, then you would need to find some other way to help him to maintain his French after Kindergarten.

2-year-old not talking much

Children vary greatly in the pace of their language development, and having more than one language in the family does not mean that a child will start to speak later. The best way to encourage your younger son to talk is to interact with him a lot in a natural way – I would not recommend that you try to “teach” him words. Read Mary-Pat’s answer in this Q&A for further suggestions. Here are some further ideas on how to motivate your kids to use the family languages.

Just like when travelling, you need to know your destination to be able to choose the right route – the same applies to raising children to speak several languages. What are your priorities when it comes to the languages? How important is it for you that your sons learn Spanish, Arabic, French? Your answers will help you focus on what is important and arrange the language exposure accordingly. And like with many other challenges in life, it is important that you and your husband start with yourselves and reflect whether your own language use with the kids support your goals.