Q&A: English-only or dual-language school for a trilingual child? 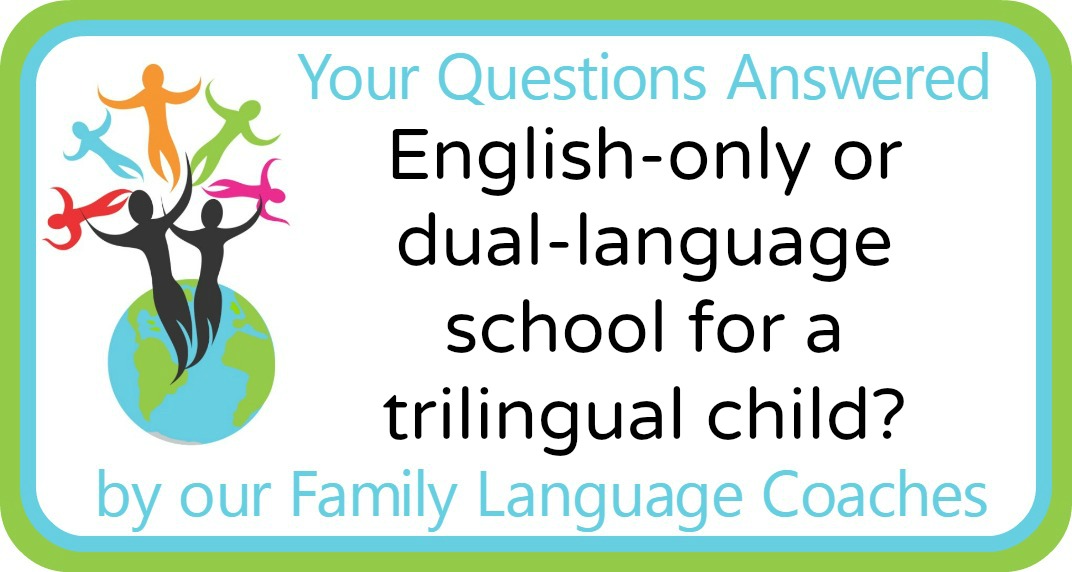 We have two pre-schoolers (4 and 1.5 years old respectively) who are growing up as trilinguals. I am Korean, and my husband is Persian. We are also fortunate that we live with our mother-in-law who speaks only Farsi and helps raise our children at home.

We have maintained OPOL policy and my 4-year-old boy is very fluent in both Korean and Farsi and he has been exposed to English for a total of nine months or so for the last three years of his life by attending English-only daycare. As you can imagine, he is picking up English really rapidly. He now mixes all three languages when he engages in free play by himself or in his talks with his younger sister. He still talks to me only in Korean and to his father or my mother-in-law in Farsi only. (I also speak Farsi, but I only speak Korean with him).

My question is whether or not it is a good decision to send my son to a bilingual school where he will start learning another language (a fourth language) when he turns five. In the area we live, we don’t have any bilingual programs in schools (except for Saturday heritage language schools, like Korean) that offer any of his home languages, Korean or Farsi.

Our son will attend an English-only preschool for the next year but in the following year, I am thinking about sending him to a bilingual school where he will learn school content in English and in Spanish (or Chinese Mandarin). He will continue with that school in those languages for several years then.

I trust that he has capacity to learn another language, and it would be ideal if any school here offers one of our home languages in the bilingual program. Since that is not the reality, I have determined that it is much better if he goes to a bilingual school than an English-only school, so that he can continue to hang out with multilingual peers and accept multilingualism as normalcy in life and in the world.

I am just worried how we can keep up with supporting him with home languages at the same time when he will be schooled in two different languages.

Thank you for your insights.
Myoung

Thank you for your question about choosing the right school for your trilingual son and for sharing your family’s language setup.

I am happy to hear that your OPOL-approach has been successful and that your older child now fluently switches between Korean and Farsi – wonderful! By attending English daycare your son is now well on his way to acquiring a third language at the tender age of four. Your question is whether to send him to a dual-language school which would introduce a fourth language for him, either Spanish or Mandarin Chinese.

When choosing a school for a child, my first piece of advice is always to find out information about the school to make sure it will provide your son with a high-quality education. Research the school’s website, visit the school and meet the head and some of the teachers and ask to observe a class so you can learn about the school’s teaching style. Find parents whose children have attended the school and ask their opinion. Only when you are satisfied that the quality and reputation of the school meets your expectations should you put it on your shortlist of schools. Which language the children are educated in should not be the paramount or only criteria. (also read this older Q&A where I answered a similar query)

The second thing to think about is your son’s continued education. Is there a dual-language school where he can go on studying either Spanish or Mandarin Chinese in the same way, i.e. not only as a subject on the curriculum? You don’t mention whether you or your husband know Spanish or Mandarin Chinese, so I presume you don’t. If the level of tuition in the chosen additional language was to decrease significantly, you would need to find additional support to maintain the language. Is this available where you live? Will your son be able to use his additional language outside the school and develop it further this way? To maintain a language, it is important that the child has ongoing opportunities to use it.

For this Q&A, let’s assume that the two schools are equally good, and that there are further education options in the additional language, so the choice is whether to go for a monolingual English education or a dual-language school. I agree with your thought that your son is capable of picking up a fourth language provided he gets enough and the right type of exposure to it. I would expect a dual-language school to be able to provide exactly this.

In a dual-language school, both school languages should get enough support. I would however recommend that you to ask the school, whether they expect you to support your son with the additional language. If yes, then this is another aspect to take into consideration – will you be able to do this?

Your concern is whether you will be able to keep up with supporting him with his home languages, Farsi and Korean while he is being schooled in two different languages. As you have a well-established routine of speaking both Farsi and Korean at home, and you continue to stick to his routine, I have no doubt that your son’s oral skills in these languages will be maintained and continue to develop.

You haven’t mentioned anything about literacy and whether you plan to teach him to read and write in both Farsi and Korean as well. If yes, then you need to find the time and the resources to do this. It is not a task that should be underestimated as to how much time and commitment it will take. However, if there are heritage language schools which your son could attend, then these may be an option. From my own and other parents’ experiences, I know that children often are less enthusiastic about attending school on the weekend, so do your best to make these classes as appealing as possible to your son.

Based on these thoughts, I hope that you can come to the best decision about the school choice for your son – please do ask any additional questions you may have below.