Q&A: How to help a small bilingual child with the community language? 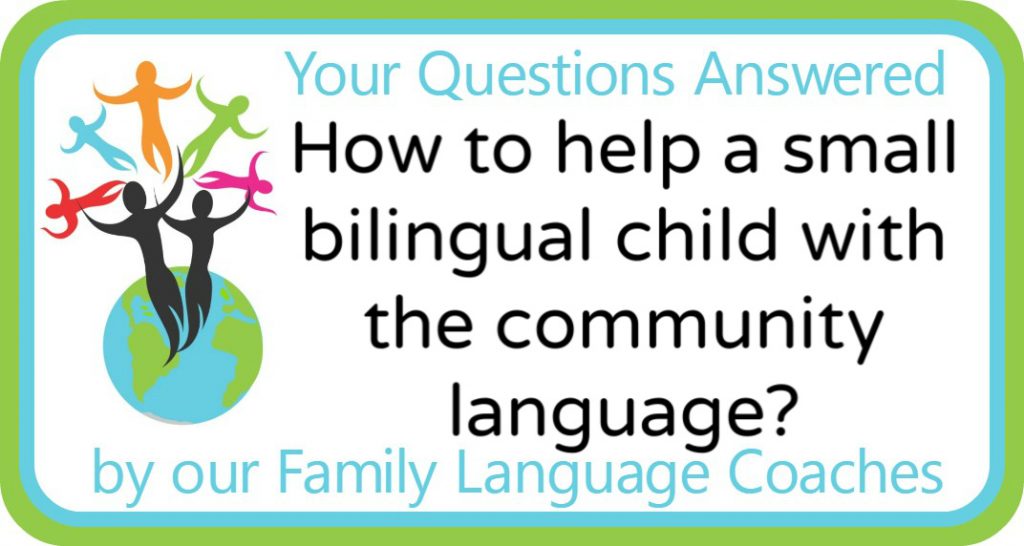 I am worried about my daughter who is three and a half years old. She was born in Sweden, but I raise her by myself and we speak only Dutch at our home. Her Dutch is fluent, and she has been very talkative for a long time, she speaks in long fluent sentences for about a year and she can reason, joke, compare, and narrate in Dutch.

She spends four days a week in daycare, and all our friends, babysitters and her playdates are Swedish. She also watches Swedish videos at home sometimes. However, she still hardly speaks Swedish. I have addressed this issue several times with all of her teachers, but they always say “Ah, don’t worry, everything’s fine”.

When I ask my daughter (which I did maybe twice in all her life) she crawls away in a corner and hides herself – a behaviour I have never seen in any other circumstance. As if she is traumatized by something (the bilingualism). She is starting to develop a bigger and bigger problem as she seems to believe she can not speak Swedish. She has trouble understanding as well.

She is going to a quality daycare, one of the better ones in town, and has gone to daycare since she was 14 months old. The teacher/child ratio is good there. I believe the teachers simply persist in believing she has a shy/quiet personality and that it is good to respect that. However, with me she does nothing but talking all day, and I know she needs this to express herself and to develop socially and emotionally.

Is there anything I can do? Do I need to give up my job and move back to the Netherlands? Or do I just need to move to a bigger city? Or is it too late already.

Thank you for your question. It sounds like your little girl is making great progress in her stronger language which is Dutch. Swedish is your community language and she is three and a half years old. Her teachers are happy that everything is fine. You’re concerned about her level of understanding in Swedish and her beliefs about her Swedish language competence.

First of all, you don’t need to give up your job or move to the Netherlands or a bigger city. And it’s not too late. Language development does take a long time and it’s normal for children to have one language stronger than the other in different ways at different points in time. For example, children will have vocabulary for things to do with home and family in the home language. Then they will have school related vocabulary in the school or day care language and not in the home language and so on.

Variation is a key feature of language development in bilingual children. That means variation across the languages and between different children. Your daughter is acquiring the two languages simultaneously. The developmental states are similar in that it’s single words first, then two words together, longer phrases and sentences. It’s also important to think about what she uses the languages for: things like greetings, commenting, requesting, rejecting, protesting etc. You don’t need a lot of language to be able to get your message across. And while she has been in day care since she was 14 months, she has had more exposure to Dutch and a strong emotional connection with it, as it’s the language of your connection so it’s not surprising that it is stronger than the community language at this stage.

I think it’s very good that the staff are accepting of her style of communication in the day care because pressure to communicate in a particular language is not helpful. The key thing in relation to the day care is that she can participate in her own way in all the activities and can communicate enough to get her needs met and to establish relationships with staff and other children.

You’re doing a fantastic job when it comes to her home language and it’s great to hear that she has been speaking in long fluent sentences for about a year and that she can reason, joke, compare, and narrate in Dutch. Keep doing what you’re doing in Dutch. Reading together is a great way to keep developing her language – there is a useful approach called dialogic book reading that you can introduce in Dutch. Here’s an article on how to do it.

The research shows that children who have early literacy skills in the home language learn to read better in the school language and do better academically than children who don’t. That’s a very good reason to keep doing what you’re doing in Dutch.

I have a few questions for you: Do you trust the teachers’ perspective? Do you think they’re missing something? I’m inclined to say from my own experience that if there was a problem, they would tell you. And at the same time, I know children can pass under the radar too if they are not causing any trouble. I don’t know enough about the qualification systems in Sweden for childcare workers though.  But I think it is good that they are not putting pressure on her to speak Swedish.

How does she get on language-wise on the playdates and with the baby sitters? When you say she has trouble with understanding – what exactly does she have trouble understanding? Long and complex instructions? Or more basic instructions? These are just examples.

The first thing is to take off any pressure on her to speak Swedish at day care or on play dates for example. The secret is to talk to her without asking any direct questions that need an answer. So, nothing like Aren’t you going to say hello?  Or Say thank you (In Swedish). You will need to practice this because it doesn’t come easy to most of us! Use statements like Time to hang up your coat not Do you want to do a jigsaw? You’re prepared for a situation where she might say something in Swedish but until she does, you are very happy to accept the current state of affairs. Don’t be afraid of silences either. You can pause and leave gaps. When you do this, don’t look expectantly at her. That will make her feel like you’re waiting for a response.

Remember that language development in general takes a long time. Comparing her to monolingual Swedish speaking children in the day care won’t help as it’s not comparing like with like. It is important to see her Swedish continue to develop of course, but she is not two monolingual children in one. Imbalance between the languages is normal. And it does sound like she is getting enough exposure to community language in a range of situations, so you are doing great there too.