Q&A: How can a single parent raise a bilingual child? 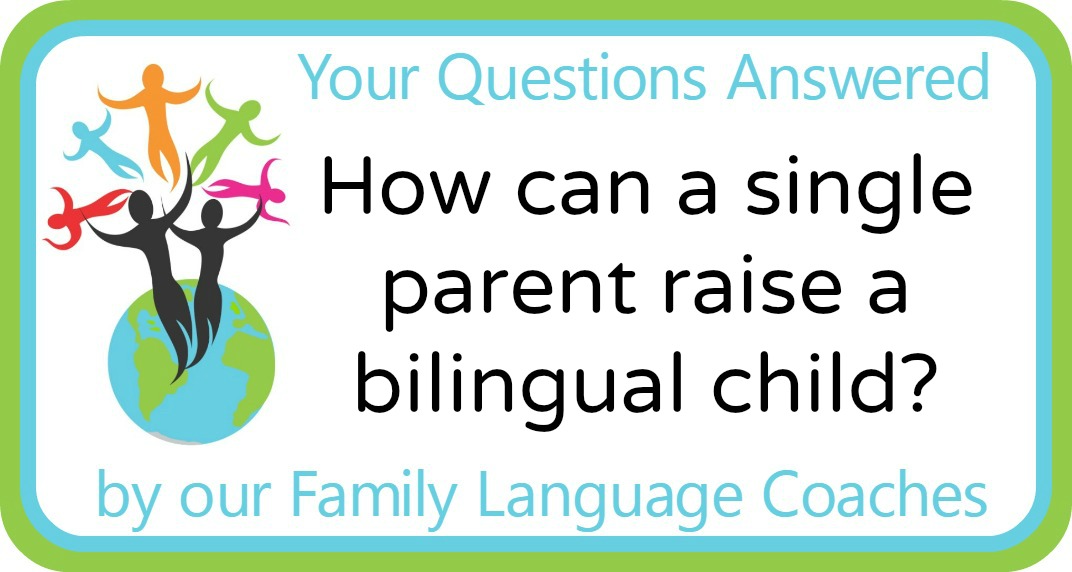 I decided long time ago that I would want to make my possible future children multilingual. I have lived years abroad (English was and still is my study and work language), but recently moved back to Finland. I’m a native Finnish-speaker, but don’t really use the language for anything else than communicating with other Finns. I read, dream and think in English.

Currently I’m expecting my first child and will become a single mom. This was not part of my multilingual plan 😉 However, I have done a lot of research and still would like to make my child multilingual. My plan is to speak English only (I have been teaching English in the primary school, so I’m very familiar with nursery rhymes in English, too, and I plan to attend music kindergarten in English with the baby to learn more) and let the grandparents and possible nursery take care of Finnish.

Needless to say, everybody around me is horrified. However, the grandparents are fully behind it. I know it takes more effort from a single parent to rise multilingual children, but I refuse to believe it would be impossible.

I have also read about studies where parents have one home language and speak another outside of home, which I have been also thinking. Does my plan even sound realistic or will I just end up messing up the entire kid?

thank you for your wonderful question and congratulations on expecting your first baby!

Your plan to raise a bilingual baby as a single parent is totally achievable! It’s a long-term project and does take time and a lot of effort but it’s totally worth it in the long run. It’s great that you have the support of the baby’s grandparents and what a lovely role for them to have in your baby’s life.

As for the unsupportive comments of others, best to ignore them as they’re most likely basing their opinions on a logic that is not supported by any research. It might be a good idea to keep your plan to yourself and if people ask, say something neutral like “I’ll see what feels most natural when the baby arrives” or something along those lines and move on. It’s none of their business, and you don’t need the hassle of having to defend your choices.

I have a Serbian colleague at the university where I work who speaks and is literate in English to academic standards. Yet, when her son was born, Serbian was what came to her first in terms of communicating with him.  It didn’t feel natural to her to speak English. He’s 18 now and fluent in both.

English is my main language although I can manage in Irish – I could only speak English and feel comfortable when talking with my little girl. She goes to an Irish language school and is fluent according to teacher and speaks Irish most of the time when in school. And we rarely speak it at home. In fact, she tells me to stop speaking it if I try!

There are many routes to becoming bilingual. You can start with exposing your child to both languages from birth (simultaneous bilingualism) or you can start with one language first and then the second one later (sequential bilingualism). One person one language is one way to raise a bilingual child but it is not the only way nor has it been proven to be the most effective way. Or as you mentioned you can make a choice depending on the location – English at home and Finnish outside of home (time and place).

It’s important to think about what your child needs the languages for and what stage of development they are at. Very early on, language is all about forming connections, being soothed, learning to take turns, having your needs met and so on. Later, language can be used for communicating intentions such as greeting, requesting, rejecting, protesting and so on. It is also important for a person’s identity and sense of belonging and culture too.

There isn’t a wrong way here. Yes, English will require a lot of support if you want fluency because it’s not the community language but when your baby arrives, connecting with him or her is more important than what language or languages that happens in. It’s about finding a way that feels most natural to you while building both languages.

So you might start with Finnish and then introduce English very early on. Or you may feel comfortable with both from the start. It’s difficult to know this before your baby arrives. The two languages will interact with each other and your child will most likely mix the two languages, beginning a sentence in one language and ending in another. This isn’t something to worry about as it is evidence that the languages are interacting. It’s not a sign of confusion.

In early language development, children just want to get their message across so they will often pick the first word that comes in order to communicate successfully. And they know from very early on who speaks what language or languages and where it’s acceptable to mix and where it is not.

What is important, whatever you decide to do is to provide your baby with high quality language input and opportunities to use both languages. That’s how both languages develop. Lots of talking with your baby, describing what’s going on around him or her. Describing what she or he is looking at. Naming their body parts when you’re washing. Naming clothes when you’re dressing them or getting them ready for bed.

Wishing you all the best with this chapter of your life and every success on your bilingual journey with your baby.