Q&A: How to help a 7-year-old improve her spoken language skills? 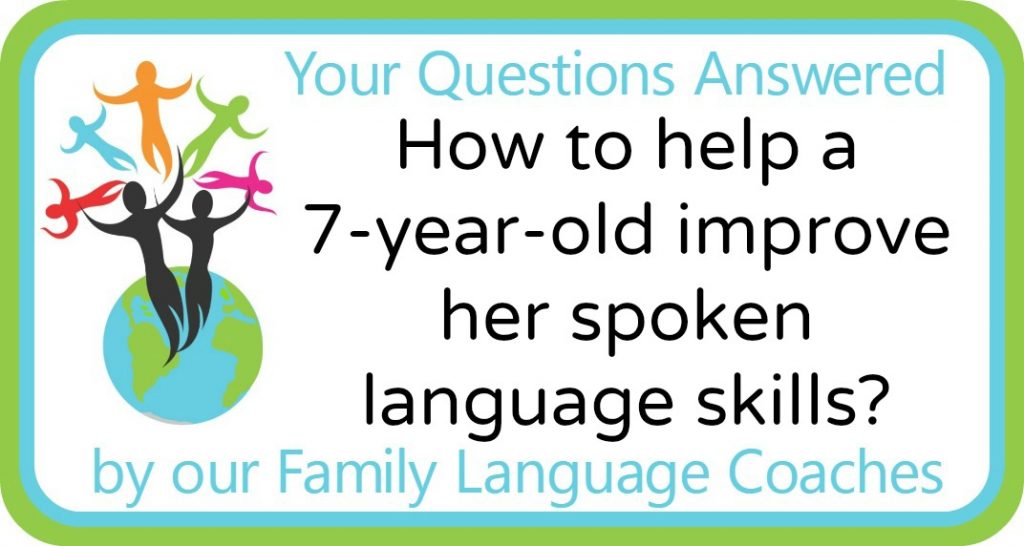 My 7-year-old was born in Switzerland, but her father and I speak English at home. She has had some exposure to German since birth. She watches tv in German 5 days a week, attended two years of kindergarten and her first year of school in German, as well as after-school activities, playdates, and normal interactions. She can read it and understand it fairly well, but her spoken German is pretty bad!

Should she do lessons after school or will her speech problems resolve on their own? She feels left out and is sometimes ostracized, but we don’t want to force her to have lessons she doesn’t need.

Thank you for your question about your daughter’s language skills.

Your daughter has been exposed to German through kindergarten, school and other activities with German-speaking children. She also watches TV in German. You do not mention it, but I presume that your daughter speaks English with you and her dad, and – as you do not comment on it – that her English language development has been normal. If yes, then the possibility of a general language issue is unlikely, as children who have speech and language related issues normally have them in all their languages.

You write that she understands German ‘fairly well’ but that her spoken German is ‘pretty bad’. How often does she get an opportunity to express herself in German? When she does, does she like to speak? Is she generally of a shy nature? I am asking this as the most effective way to learn to speak a language is to use it as much as possible. Watching TV in German may help her understand German, but for her ability to speak the language, she needs to interact in German.

Are you and/or your husband fluent in German? If yes, then maybe you could replace some of the time she is watching TV with doing some activity she likes in German with her. I understand this means that you would change the language you normally speak with her, but by your description, she would benefit from more German speaking.

If neither of you feel confident in speaking German with your daughter, maybe you could look into hiring a German-speaking child carer to spend some time with her after school. The important thing is that your daughter feels free, motivated and encouraged to use her German. Spending one-on-one time with someone will be more effective than group activities, where she will have to share the talking time with several others.

I am very concerned that your daughter says that she feels left out and is sometimes ostracized by other children. If you haven’t already done so, I strongly recommend that you discuss this with her school. It is important that your little girl feels comfortable with attending school – not only for her language development, but more so for her well-being. If there are instances of bullying, you need to discuss this with her teachers and possibly other parents to find a solution to make it stop.

You should also talk with her teachers about her language skills. Are they concerned about her German? Does it affect her progress at school? Does she participate in discussions in the class? Does she have school friends she interacts with?

Before looking into arranging additional German lessons for her, I recommend that you try to get a fuller picture about your daughter’s situation at school. Even if her teachers were to think that she could benefit from some additional German tuition, consider whether you could arrange this in a way that is fun and engaging for your daughter, as traditional language classes may not have the desired effect.

Wishing your daughter the best of luck and all of you a successful bilingual family journey!