Q&A: How many languages can a small child learn at the same time? 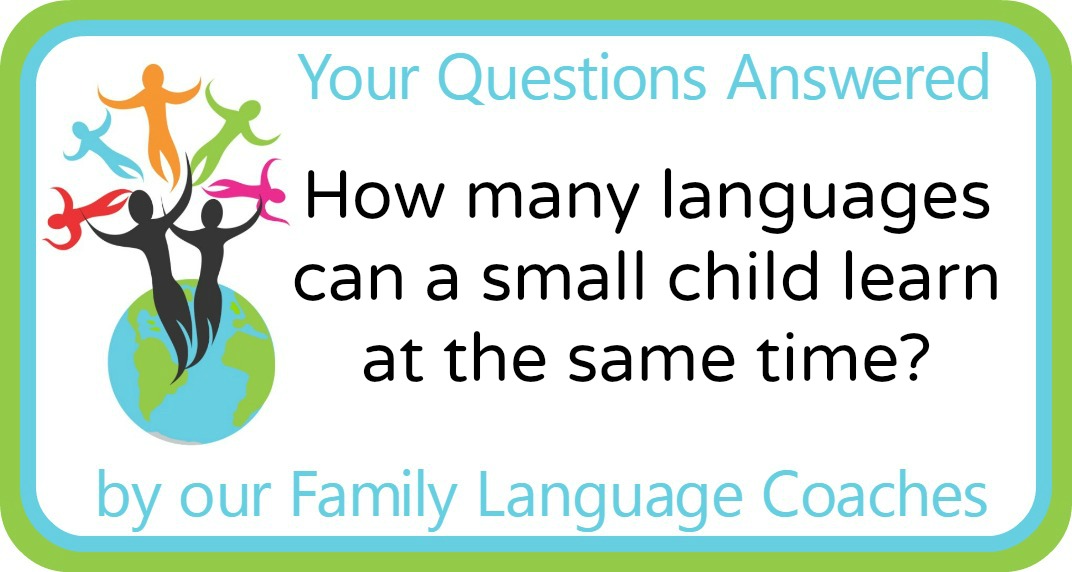 I am a native Hindi-speaker and so is my husband. We live in USA and are fluent in English, too. Our nanny is Romanian but speaks (non-native) Spanish. Our 7-month-old daughter spends majority of time with the nanny and my parents, who speak Hindi with her.

I am trying to also teach her French and Mandarin if possible. The plan is to send her to a French immersion school and weekend classes + playgroups in Mandarin.

Do you think my kid can learn these different languages around same time? I want her to be fluent in languages and read/write in Mandarin/Hindi/English if possible.

That is a lot of languages! It is, of course, possible to learn that many languages, but you need a very clear plan and I would recommend stretching it out over the first 7-12 years of your child’s life. The rule of thumb is that about 30% of a child’s waking hours needs to be spent in a language to obtain conversational fluency, so, realistically, you’re looking at a max of three languages. Once you have those three languages at a decent level, it would make sense to add another one.

Now, there is no harm in adding additional languages at a young age and it can actually be extremely beneficial to be exposed very young if they want to learn the language later on in life. You just need to understand that there is a trade-off between the number of languages and the level of fluency in each. You could try for conversational fluency in three, or just basic levels of ability in more than three.

It’s also important to understand that there is a tremendous difference between conversational fluency and academic ability, including writing. To obtain academic ability in a language requires additional years of study and focus. With Mandarin writing, you’re looking at far more than you would need for English or Hindi based on the complexity of the written language.

Your daughter will not gain any serious level of ability in Mandarin by going to weekend classes and playgroups. She will simply gain exposure, familiarity with the sounds and patterns, and ability to speak in only very basic sentences.

The French will be easy to pick up due to the extensive time she will spend in the language and the academic nature of the program. For Hindi, your daughter should naturally pick it up at home assuming you do not begin to answer her in English or French at any point. She should understand the house rule that only Hindi is spoken at home or, at least, with mom. However, she will not pick up academic language or writing unless you have a systematic plan to teach her them at home. It requires a lot of time, so you should plan for that in your daily routine.

Your daughter should naturally pick up English from her environment assuming she is exposed to it enough. However, if Hindi is spoken at home and she goes to a French immersion school, she will not pick up much English. You may therefore want to look at setting a foundation of English by sending her to an English preschool or daycare or hiring an English-speaking nanny. You could also look at dad speaking only English and you speaking only Hindi, but I’d strongly recommend keeping the home language entirely in Hindi if dad speaks that as well.

To make it all work, it sounds like you need to come up with a clear plan as to how your daughter will learn English and then how you would like her to pick up academic and literacy abilities in Hindi. The French will come naturally from school. The Mandarin I would just leave as a side project and be happy with whatever level she picks up through the limited exposure.