Q&A: How to balance the exposure to two minority languages for a trilingual (-to-be) child? 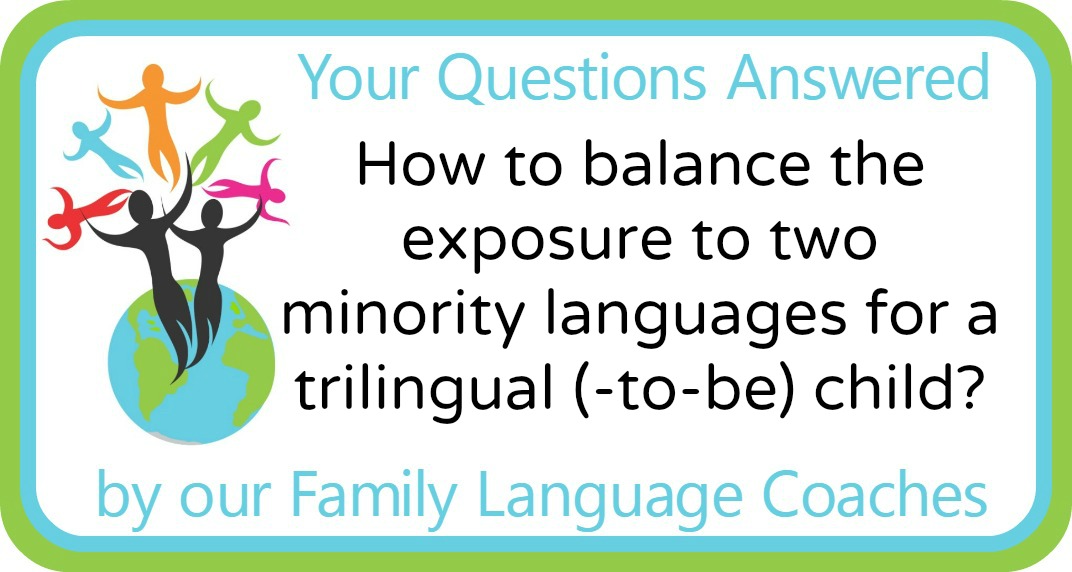 I have been reading a lot on your website and have found a lot of interesting stories and insights!

I am Franco-Chinese with French and Chinese as my mother tongues, my partner is British and we live in London. I am pregnant and I am keen to make sure that my children can speak both Chinese and French – I am not too worried for English as we live in London!

One plan I have been thinking about and I was wondering if I could get your advice is: – from 6 months to 3 years, I would put my child in the Mandarin and English bilingual nursery we have in the neighbourhood – from 3 years old, I would like my child to be educated in the French primary school in London (there is no bilingual Chinese English school yet) – myself at home, I would speak to him/her in Mandarin during week days and French during weekends.

I know this is going to be hard work especially for me (my friends tend to all be French or Chinese living in the U.K. And we all speak “mixed” languages with different words from different languages in one sentence, which will confuse the child big time!) but I am adamant on passing on both my mother tongues to my children.

The good thing is that my partner is very supportive of this – he only speaks English but says he wants to learn with the kid!)

Would be grateful for any thought you have on my plan!

Thank you so much for your kind feedback and for the question about raising your child to become trilingual in Chinese, French and English.

Passing on two minority languages is a big undertaking and one should not underestimate the time an effort to do so. This said, it can be and has been done. The clear advantages you have are your passionate commitment, your husband’s support and the availability of external resources for achieving your goal.

I like both of your ideas about starting in a Mandarin and English bilingual nursery and attending a French primary school from the age three. This way your little one would get a foundation in Mandarin and English – both of which would also be your home languages. Going to an all-French school, being immersed in the language for a large part each weekday would mean that your child would soon become a fluent French-speaker. I presume there are also further schooling available in French?

I would be in touch with the French school and ask about their expectations for the level of children’s French when they join. It is possible that they are used to taking on small children with no or very little French skills, which would mean that you would not have to worry too much about French prior to the school start. Of course, you can still sing, read rhymes, play games etc in French with your little one – but you wouldn’t need to feel the pressure of having your child reach a certain standard.

The variation of the time and place (T&P) method you mention, where you would speak Mandarin during the weekdays and French during the weekends, is certainly doable, but would require a lot of mental composure from you. Our Family Language Coach Maria Babin is switching between two languages (French and English) with her children, but does so on a fortnightly schedule as she found shorter periods too taxing. However, every person and family is different, so you will not know how it feels until you have tried it.

Don’t worry about the language mixing you and your friends do when talking with each other. This is normal bilingual discussion behaviour and it will not confuse your child. He or she will get enough French-only, Chinese-only and English-only exposure to be able to pick up the individual languages.

Since the external Mandarin exposure would mostly stop when your child moves from nursery to school, you will need to pay attention to the amount of Mandarin he or she will interact in and have the opportunity to speak. To maintain and develop the Mandarin skills for your child, I would recommend that you stick to Mandarin only with your little one, at least at the point where the French school starts. Once your child goes to school and French inevitably soon becomes a strong language, if you speak Mandarin only during the weeks, it could mean very little Mandarin exposure. There would be some interaction in the morning, and some in the evening – but since your husband will also be present, the dominating language in the evening will most likely be English.

If you were to speak French during the weekend (alternating with English, whenever your husband is part of the discussion), the Mandarin speaking time would be reduced to a maximum of one to two hours each weekday. I know your husband wants to learn Chinese and French alongside your child (and I respect and commend him for it!), but it will most likely take him some time before he can lead a conversation in either of the languages.

It is important to have a plan with clearly defined goals, but it is equally vital to have the flexibility to change the plans if the situation does not turn out the way you intended. You may find that you do not like either the nursery or school, or that of some reason you will have to move to another area where you would not have these resources. Once you see how your child’s languages develop, you will also understand which approach works for you and when to adapt it. Please get in touch again if you need further help.

Should you have any further questions, please do not hesitate to comment below.