Q&A: How to deal with several family languages for a child with speech delay? 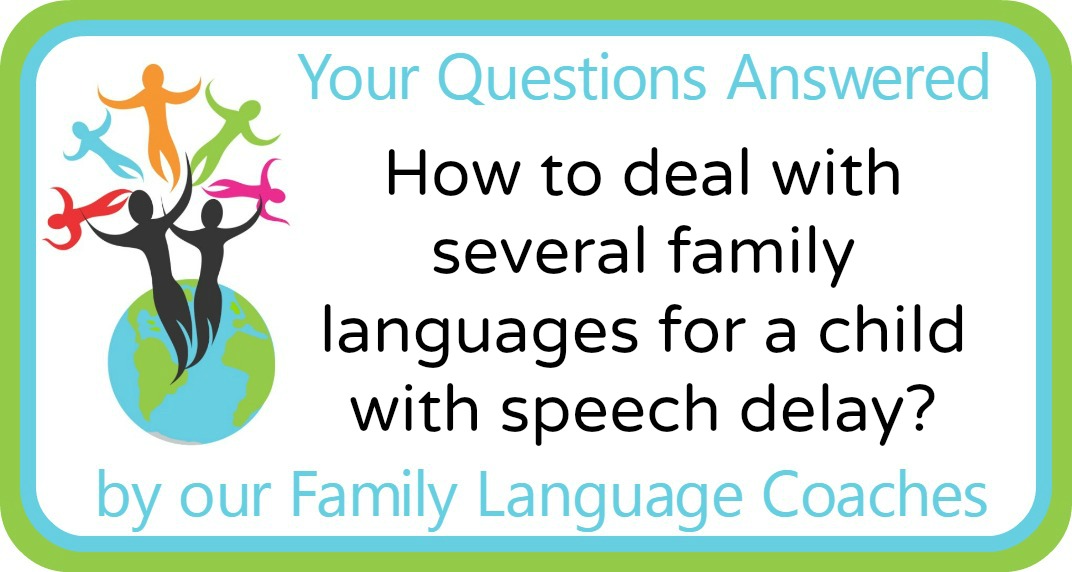 We have a very specific question regarding our first daughter, who has some speech delay and is exposed to three languages. We need to take an important decision regarding our multilingualism and school and we are confused because of different therapists’ advice.

My husband and I are Italians. Our first daughter was born in France, where we spent her first year of life before moving to the U.S. She was at that time mainly exposed to Italian (she wasn’t enrolled in a daycare) and a little French (playgroups, environment). When we moved to the U.S. she attended a daycare and then a pre-school, and learnt English. By her first year we noticed that she had some difficulties with language and the paediatrician suggested to consult a speech and language therapist.

After bouncing from one structure to another (in the meantime her English improved a lot and became her primary language), she had been diagnosed with some speech delay as well as Sensory Processing Disorder form a developmental paediatrician who prescribed speech therapy, psychological therapy and occupational therapy. She received the first two for a year, but not speech therapy as the waiting list was huge and she finally got a spot when it was time to move again. She had a couple of sessions and another evaluation before leaving and again she was found to have delay and in need to do therapy.

When we moved back to France (after living in the U.S. for four years), we enrolled her in a bilingual school to help smoothing the transition to French. We spoke Italian and English at home. During the last year both our first daughter and her younger sister, who was born in the US, started switching from English to Italian and learning French as well.

We are now facing the dilemma of what language we should speak to them (especially our firstborn) and if we should or should not eliminate one language as suggested by the speech and language therapist that recently evaluated her.

We are also very confused regarding the school choice, since some professionals have recommended a 100% French environment, others 100% English or bilingual one. Since she is now entering the primary school this is a very important decision. We know we’re going to stay in France for 5 years but don’t know if we’re going to stay here after that or move somewhere else, and if we need to stick with a bilingual school just in case we move again to an English-speaking country or rather focus on French and then either move to a French-speaking country or have her/them go to a French school for the rest of their lives.

So our questions are: Is it better to get rid of one language in order to help her in the other two because two languages are the maximum a child with language delays or disorder can process? If so, how can we decide which one we should eliminate? If we use the logic that would mean English since it’s hard to get rid of your mother tongue or the environment language…

But would that be the best choice if English was until a few months ago her “primary” language and it may be easier for her to learn to read and write in English since Italian is not an option in school? Should we therefore choose a fully French school or a bilingual school?

Our last question is: what about our second daughter who was born in the US and who wants to keep speaking English, is it possible to speak English to one kid and another language to the other?

Thank you so much in advance for you time and help.

Thank you for writing to the Multilingual Parenting Family Language Coaching team!

I wanted to start off by congratulating you on your commitment to multilingualism. It is evident from your question that you and your family really value languages as a gift to your children. You present some excellent questions that we can address one by one.

You are first wondering if you should eliminate a language to help your daughter manage her speech and language delays, so let’s talk a bit about this topic as a whole.

When a child is learning two or more languages simultaneously parents, teachers and even paediatricians sometimes worry that this may lead to language delays in children. Yet the good news is that is just not the case! Researchers have observed children across the spectrum and have found that being multilingual does not cause additional delays or difficulties.

Children that are bilingual and do in fact demonstrate a speech or language problem, will show these same problems. Time and time again, the consensus has been that these speech problems are not caused by learning more than one language so introducing your daughter to two or more languages is not going to impact the delays she is currently exhibiting.

It sounds like, unfortunately, this is the advice that you may have gotten from the individuals that are currently working with your daughter. Misconceptions about multilingualism still exist even within the speech language pathologist community. Often times, the advice parents receive is that if a child is facing some difficulty in their speech and language development, dropping to one language is the best course of action. Yet, as I pointed out earlier, research has proven that exposure to more than one language does not cause speech or language delays.

Ideally, families like yourself in need of speech and language therapy should work with a multilingual clinician who can support the languages the child is exposed to throughout the day. If this is not an option, see if you can continue to work with a therapist who is respectful of your family’s language approach and has experience working with multilingual individuals. It is essential that the selected clinician is willing to at the very least problem-solve and try different strategies until one is identified that best suits the needs of your child.

To continue to support your multilingual goals, I would encourage you to play an active role throughout the therapy process. If the clinician you ended up working with is monolingual, he or she can work in French during the sessions and you can practice the same concepts and strategies at home in the target languages you settle on. I encourage you to keep an open line of communication with the therapist and ensure that you are in agreement with the approach and methodology used during sessions.

Now as far as whether or not you should eliminate a language I would not recommend that you do so if the only reason is concerns about impacting language delays. If you think that you can continue to manage the current languages as a family, then feel free to proceed. The last thing I want is for you to receive misguided information, from albeit well-meaning individuals, that will the cause you to make a decision you may later regret.

Regarding your school choices, I am always in favor of quality language schools as I feel that they can support the family goals in an academic environment. They also tend to understand the challenges and benefits of raising a bilingual child so the staff at a multilingual school is likely going to be more understanding of what you are dealing with at home.

And last but certainly not least, let’s talk about your second daughter and your language choice when speaking to her. Through my time working with multilingual families, I have seen many different variations for language policies. I have in fact come across families that speak one language to one child and a completely different one to another child for a variety of reasons. It works really well in some families and not as well in others. It really depends on the dynamics of each family.

There is really only way to find out how it plays out in your family and that is to give it a try. Test it out for a bit, and if you do in fact decide to limit the number of languages you speak to your oldest daughter and if it feels like it flows, then keep it going. I am going to be perfectly honest, it is going to be more difficult than if you just spoke the same language to both children but it does not mean it cannot be done!

If you do decide to try it, make sure to check in and let us know how it went!

Best of luck on your language journey!

Marianna Du Bosq was born in Caracas, Venezuela where she spent the majority of her childhood as a monolingual speaking only Spanish. Until one day, right before her thirteen birthday, her family moved to the United States and her adventure and passion for language learning began! Her love for languages started with her own experience and grew into a desire for teaching others leading her to spend several years in the classroom teaching dual language learners. She is now facing the most challenging yet rewarding facet of her life, that of a multilingual parent with a mix of English, Spanish and German! Marianna is the blogger and podcast host at Bilingual Avenue where she interviews multilingual parents sharing their best practices along with experts in the field of multilingualism providing actionable tips and strategy. She has a Master’s in Education with an emphasis in Curriculum and Instruction.