Q&A: How to do OPOL as parents if you are used to mixing languages? 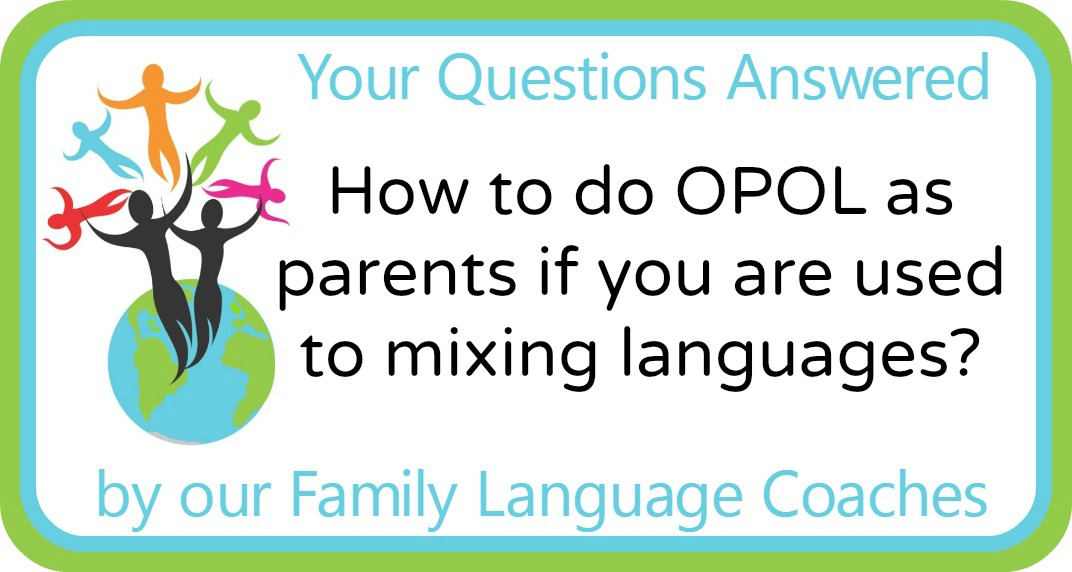 My wife is Australian, I am Flemish (Dutch-speaking Belgium) and that is also where we live. We are expecting and want our child to be bilingual English-Dutch to pass on both of our cultural identities.

Nowadays, since my wife’s Dutch has become very good, my wife and I speak a mixture of Dutch and English to each other. We sometimes have conversations in one language, but also sometimes each speak in our own language during the same conversation, we regularly code switch, use specific words of each other’s language, etc…

Thank you for your answer.
Niels

Thank you for your question – you are not the only bilingual parent who is mixing languages and thinks about this!

You and your wife use your languages in a way which is very natural for two bilingual people who know each other’s languages – switching between them depending on topic and situation. As you mention, this is called code-switching and I don’t see a reason why you should change the way you talk with each other for the sake of sticking to only one language.

What you want for your child is to be a confident speaker of both English and Dutch, and the two of you will initially be the main sources of exposure to the languages. When either of you speak to someone else who only knows either English or Dutch, you change your way of speaking and only stick to the language the other person understands. This is of course what you would like your child to be able to do as well. For this to happen, it is important that your child gets exposed to the languages in a way that allows him or her to keep them separate.

You could consider the 2 parents, 2 languages (2P2L) approach which has proven to be successful when both parents are bilingual – note that in this scenario you would normally also have plenty of other exposure to both languages. Thus, the crucial aspect here is exposure. In your situation, it sounds like English may be a minority language and your child will generally hear more Dutch than English. (Unless you for example opt for daycare or education in English.)

So for your child, you need to consider whether there will be enough English exposure, and I would recommend that your wife consistently sticks to English when speaking directly with your child. Consistency is not a be all and end all when using the one parent, one language (OPOL) approach – the need to be consistent depends on the amount of exposure (read this article for further thoughts on language consistency with OPOL).

I understand that it is difficult to imagine how future family conversations will take place – who will speak what? I can assure you that things will fall in place, and when the time comes you will find a way that suits you. In a bilingual family, it is perfectly normal and fine for people to be using and mixing languages in a very similar way that you do currently with your wife. At some point, you might however notice that there is a need for more English exposure for your child and then decide to stick to English as your home language. The dynamics may change over time, but by being aware of how your child’s languages evolve you will be able to make the best decision on your language choices.