Q&A: How to ensure that a trilingual (-to-be) child also picks up parents’ common language? 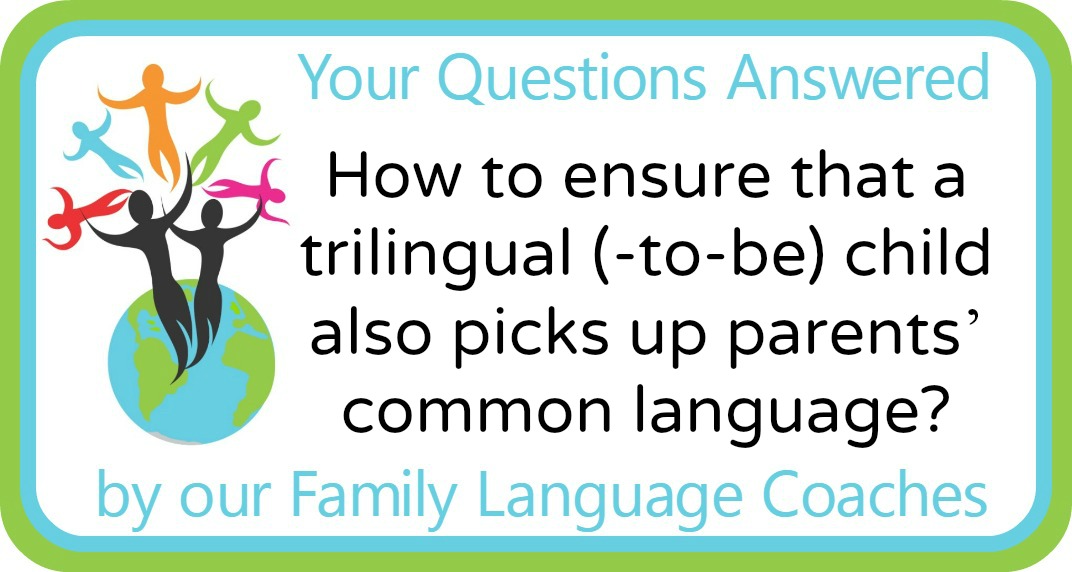 I have been doing a bit of reading on raising trilingual children, as my husband and I are expecting our first child in January. It seems that in most cases the parents have two individual native languages, and the third being that of the country they live in. This is not the case for us, hence this inquiry.

My native language is Danish, and I speak fluent English. My husband is native German (also speaks English quite well), and we live in Germany. Our common language at home is English. We wish for our child to learn all three languages but we are unsure about how to go about it so it doesn’t become a hindrance for our child’s language development.

So far, we have been set on each of us speaking our native language with our baby. Especially me as Danish will be the minority language. The issue arises on how and when we introduce English as the third language? Will it be able to learn this passively as we adults speak English?

We hope we will be able to get our child in a bilingual kindergarten from the age of one; so German and English. But still at home it will be a bit of a language confusion if we speak our native language to the baby and English to each other?

I am curious to hear your input.

Thank you for your question and congratulations on your upcoming happy family occasion!

Let me start with your last question – whether the fact that you would be speaking your respective mother tongues (Danish and German) with your baby and English with each other would cause language confusion for your child. The answer to this is no, the use of several languages in a family does not cause confusion for the child’s language development.

Note that your child will not be not born with a preconceived conception of how languages “should be” used in a family. Having three languages in the family will be the normal state of things for him or her. Using the one parent, one language (OPOL) approach, Danish will be the language identified with mummy, German with daddy, and English the language mummy and daddy speak together.

Yes, your child might mix some words while picking up the languages, but this does not mean there is a confusion – language mixing is a natural part of a bilingual child’s learning process, and nothing to be worried about.

It is perfectly doable to raise your child trilingual to speak all the family languages. As you are the only source for Danish, it is important that you are as consistent with Danish as possible with your little one. German is the language you will need to worry the least about, because your child will learn the majority language no matter what, growing up in Germany, and your husband speaking the language at home. If you manage to secure a place in a dual-language kindergarten, then English is also in a very good place.

Let’s look at the individual languages you want your child to learn:

Danish – your native language and the one you have chosen to speak with your child. If you haven’t already done so, start speaking Danish with your baby now. I know it can sometimes feel a bit silly to speak to your bump, but it is good both for you and your baby. For you, because you get into the routine of always speaking Danish with him or her. For your baby, because this will be a kick-start to the language learning. Research has found that unborn babies pick up a lot more of the language than we previously thought.

German – your husband’s native language and the language of the community your live in. As mentioned, there will be enough exposure to German in one way or another, and the language will in time become your child’s strongest language (if you continue living in a German-speaking area). Your husband does not have to worry about sometimes switching to English when he talks with your child. This will in the long run not have any effect on how well your little one speaks German.

English – your and your husband’s common language, and potentially the second language of the kindergarten. There are two possible scenarios here, depending on whether your child attends the dual-language kindergarten or not:

Attending a dual-language kindergarten: If he or she were to gain a place and thus be for several hours a day be immersed in an environment where both languages are spoken, then the odds are very high that English is added to his or her language repertoire. To maintain and develop the fluency in the language, it would be beneficial to find further education that also offers the same level of exposure to English. How soon will you know if you will be granted a place at the kindergarten?

Not attending a dual-language kindergarten: If the kindergarten plans do not come into fruition, then you need to find other ways arrange more English exposure for your child, if you want him or her to become fluent in the language. Your child will inevitably pick up some English (sooner than you think actually) by hearing it in the home, i.e. gain a receptive knowledge of it. However, for a child to learn to speak a language there needs to be interactive exposure – this means that there must be a need and an opportunity for the child to speak the language.

I understand from your message that you are the parent who is more comfortable in speaking English, so it may come more natural to you than your husband to want to offer your child additional English exposure. However, since you already are the minority language parent for Danish, this would not be my recommendation, as it is all too easy for the lesser spoken language to lose ground. German will no doubt become a strong language in your family, and English may also do so at the cost of Danish. This does not mean that you should never use English with your child, but try to keep it to a minimum, and if possible, to certain occasions only.

If you cannot get a place at your chosen kindergarten, I would look for other opportunities for English exposure. This could be playgroups and play dates, for example. You could look to hire a part-time native English-speaking nanny, or for example a student at a nearby university who could come and play with your son a couple of times on the week.

As a family, you could have the occasional English day, when everything you do is in English. Yes, on these days you would speak English with your child, but make it clear that this only applies to the specific days you have dedicated to the language. It would be a variation of the time and place (T&P) strategy. The good thing about English is that you will find plenty of resources both online and in the community to support your child learning English.