Q&A: How to get a toddler to use the minority language? 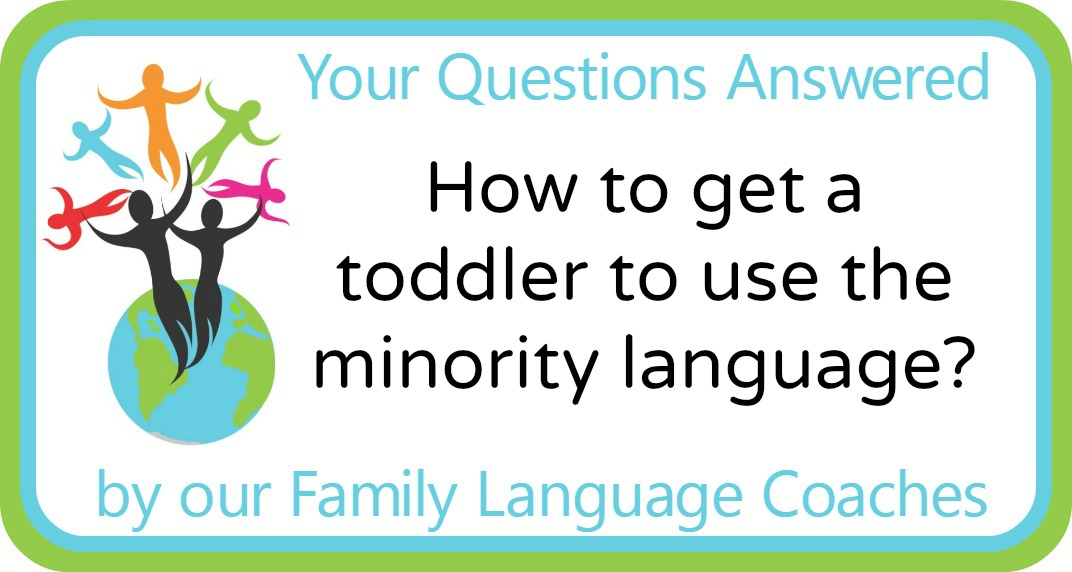 My daughter can speak for about 50 words now but still can’t combine the words. She likes to read books and watch cartoon movies in German or English and sometimes Russian (Mascha and the Bear) or sing a song video in German, English and Indonesian. It’s a little difficult for me to find Indonesian books or movie here.

What I want to know:

1. From the words that she can say, 70% is German, even though almost the whole day she is with me. She only meets my husband a few hours before sleeping and on the weekend. She can understand my commands in Indonesian but for speaking mostly are German. Before, when she said a word in German, I repeated in Indonesian, but then she changed it in Indonesian but not correct. For example: dog in German is Hund. She can speak clearly “Hund”, and then I repeated in Indonesian “anjing”, after that she said “an” for the dog.
Is it a mistake to repeat in the words she knows in other language? How to overcome this problem?

2. I want her and her sibling to speak Indonesian with me and my family. Every day I make a video call with my father in Indonesia, and he also tries to speak with my daughter. What I see from many friends of mixed marriage, is that the children mostly understand Indonesian but only speak in German. How to make my children to be more active for speaking in Indonesian?

I’m looking forward for your answer and thank you.
May

So your little girl is 22 months and can speak about 50 words which is more or less what you would expect for a child of her age. (50 words across both languages is what we would look for.) You mention that she still cannot combine the words but by the time you read this, she might well be doing it!

If she is 2 years old and not yet combining the words into phrases, you could contact your local health services to see a speech/language pathologist for advice because children should be combining 2 words together by 24 months.

It is when children have a single word vocabulary of 50 (made up of nouns and verbs and prepositions) or so that they can begin to combine words into two word phrases. This is a big milestone in language development. It shows their increasing coordination for producing complex strings of syllables. It’s also evidence of their understanding of and expressing relationships between objects and events. For example, early 2-word combinations (in English at least) might be something like Mummy up to mean ‘Mummy lift me up’. As children progress then, their 2-word phrases start to include verbs so you get things like want juice or car go!

You also say that she understands Indonesian and tends to respond in German and you mention her pronunciation in both languages. When children are acquiring speech and language, their development follows a particular path so in English for example, a 22-month-old might leave out the last sound in words or leave out the unstressed syllable in words like tomato and say mato instead. This may be what is going on when she repeats the Indonesian word for dog.

At this stage I wouldn’t worry too much about the accuracy of her pronunciation. If she pronounces the word incorrectly in Indonesian, you just repeat it after her naturally sayings something like ‘Yes it’s a dog. We have a dog’ etc. There’s no need to stress the word – just repeat it naturally after her. As for repeating the words in Indonesian when she says them in German, I would pay attention to the purpose of the interaction and keep the repetition natural so you just continue your commentary in Indonesian.

When I say the purpose of the interaction, I mean is she commenting or requesting for example? You want her to get her message across and not worry too much about which language it is in or how clearly it is pronounced. For 2-year-olds, we expect parents to be able to understand 50-75% of what they say, so don’t be surprised if you don’t understand everything! At 2 years of age, we expect strangers to be able to understand 50% of what toddlers say.

As for the 2nd part of your question about supporting the minority language, this is a long term plan and you are already doing a great job with the video calls with your father. It’s not easy to get children on the phone even if it is a video call! There’s no magic formula I’m afraid. It’s a long term goal and you need lots of ideas to help along the way. You want to give high quality input in terms of language and communication opportunities. Children learn to communicate gradually via the people that are important to them, especially their parents. I believe that’s all you have control over. They’re free to communicate in whatever language they choose and while it may drive you nuts or make you feel disheartened, you can only control your own input and stick-with-it-ness. (Not sure that’s a word but you know what I mean!)

There’s no reason to give up the minority language just because the child isn’t using it. By continuing to hear one language on a regular basis, their understanding is being nurtured. They are still storing it and it can be activated in the future. And it’s really important to keep up exposure to the minority language as it’s an opportunity to nurture receptive bilingualism (a.k.a. passive bilingualism) which at least gives the option of active bilingualism in the future. Of course it can be upsetting when your child doesn’t speak your language. But it’s really important to stick with it and play the long game. If you stop speaking the minority language to them, then that language can be lost quite quickly. Colin Baker who is a respected expert in the area says that the best choice is for the parent to keep using his or her preferred language even if the child doesn’t respond in it because at least that way, the child is still becoming bilingual, even if it’s only receptive.

I have a free e-book with 25 ways to help support the minority language and I will send a copy to anyone who wants one – just sign up to my blog at Talk Nua, and email me at marypattalknuacom and it’s all yours.