Q&A: How to juggle several languages in the home – what if you move? 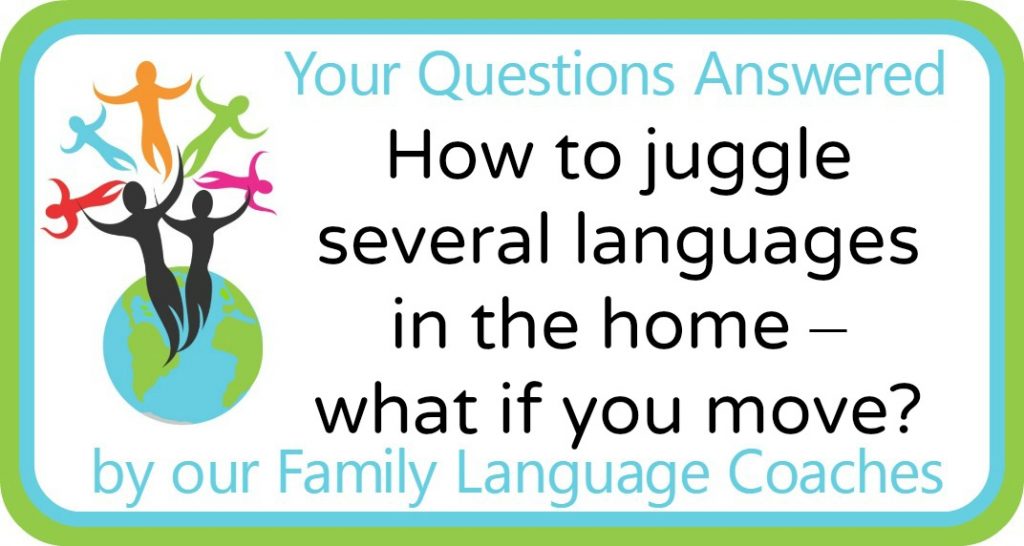 congratulations for the excellent website! It’s great to hear about the experiences of other multilingual families and be able to get advice from a Family Language Coach, as it is often difficult to decide how to handle this subject.

I would like to present you my situation and ask you some questions concerning the use of languages in our family. I am of Greek and German origin, speaking both languages fluently as I grew up in Greece but attended a bilingual school and then lived in Germany for some years. My husband is of Syrian origin and has lived in Greece for many years, so our common language is Greek.

We decided to raise our two children (twins, 9 months old) bilingually, so my husband speaks Arabic to them and I speak Greek. I chose Greek because I felt much more comfortable to communicate with my children in that language, as it was also my own family language. Greek is their “strong” language right now as they spend almost all of their time with me. In addition, we live very close to my parents who also speak Greek to them, as well as everybody else in their environment (friends, relatives, people outside) as we live in Greece.

My husband on the contrary works a lot and does not have much time to spend with our children. Unfortunately, he is the only one who speaks Arabic to them at the moment, except when some members of his family visit us occasionally. I understand a lot in Arabic but speak little. Do you think it could be a good idea to switch to Arabic when we speak to each other in front of the children, in order to raise their exposure to that language?

There is however another factor to consider: we are thinking of moving to Sweden where my husband has relatives and some options for work. If we do move, our children will be much more exposed to Arabic because of my husband’s family, and the exposure to Greek will decrease.

I would like my children to also learn German fluently, so I am thinking of introducing German to them somehow. I have started to sing some German songs to my children every day, as they are very familiar to me and I thought it is a good way to start. I am still not sure though if it is the right time to do so and what my strategy should be for the future.

If we move to Sweden, I am really confused about how to approach the situation. Our children will probably start going to a Swedish nursery from an early age as I also hope to find work there, so they will start learning Swedish there. But then I was thinking of sending them to the German school in Stockholm, as it would be the only way to learn also the German language, but also because in Athens there is a German but not a Swedish school (so in case we would like to come back to Greece they could continue there).

Finally, I need to mention also two important factors to take into consideration… I would like my children to also learn how to write and read in Greek and in Arabic, and of course I would like them later to learn English as a foreign language at a high level.

I am afraid all this is maybe too much… What do you think? What advice can you give me concerning our situation?

Thank you in advance for your answer.

Thank you for your wonderful feedback – it fills my heart with joy to hear that our site and replies are helpful! Your situation is interesting, and I can understand that you find it difficult to make your mind up about the languages. As you haven’t yet decided about moving to Sweden, I will first comment on the language situation in both scenarios and then address the literacy aspect.

If you move to Sweden

A move to Sweden would mean that Greek, which is currently your children’s strongest language, would become a minority language in the family. For this reason, I would recommend that you continue speaking Greek with the kids. However, should you find other language exposure resources for Greek, such as playgroups and other Greek families to spend time with, then you could consider also using some German with your kids.

As per your description, the Arabic exposure would increase if you were to move to Sweden, thanks to the extended family of your husband. This would take the pressure of your husband as the only person speaking Arabic with your children, and give your kids a greater chance of becoming fluent in the language.

A German school would be ideal to introduce this language to your children after a move. As mentioned above, to maintain their Greek fluency, it would probably be best for you to continue speaking Greek. It is hard work to maintain a minority language and introduce another language if you are working full time. For kids to pick up a language from us, we need to have enough time to interact with them in the language. If their school language is German, they will learn it.

If you move to Sweden permanently, and even if your kids were to attend a German school, they will also learn and become fluent in Swedish. Attending a Swedish-speaking nursery will allow them to quickly pick up Swedish (much quicker than either you or your husband will).

I understand your wish for your children to speak English. I would however not introduce it as a family language as you already have two (potentially three) home languages to contend with. English is taught at an early age in Sweden and it is very easy to find resources to help your kids with learning the language later.

If you move to Sweden and your kids attend a German school (where I presume Swedish will also be taught), they will learn to read and write both these languages at school. Both for Arabic and Greek you (or, in the case of Arabic, some other relative) would need to either arrange for enough time to teach your kids at home, or alternatively look for Arabic and Greek classes or private tutoring.

If you stay in Greece

If you decide to stay in Greece, Greek will continue to be your children’s strongest language. You may want to consider switching to speaking German at home. (see below)

Passing on Arabic will be a challenge if your husband is the only source for the language for your kids and he has limited amount of time to spend with them. Are there any Arabic playgroups or community schools they could attend? I appreciate your suggestion of switching to Arabic as your home language, however, you need to carefully consider whether you will feel comfortable in switching to using Arabic (at least until you become more fluent in the language). Since you do understand Arabic, what you could do is to ask your husband to always speak Arabic when the kids are present, and not to switch to Greek with you. This way he would speak more Arabic when he is home. You could answer in Arabic if you know how to, or respond in Greek until you pick up more of the language. It will take some getting used to for your husband, but it would be very beneficial for your children’s Arabic exposure.

Since you are fluent in German, you could consider gradually introducing (and increasing) the use of German with your children, and speak German when you are on your own with them. As your husband has limited amount of time with them, I wouldn’t use German when he is around (unless your husband also understands German). This is a discussion you need to have with your husband, how he feels about having German in the home.

Again, of all the languages you wish your children to learn, English is the easiest one to find resources for. You need to prioritise the languages and focus on the ones that are more important to you and your husband. Your kids can pick up English through school, media and other sources.

Whether your kids attend a Greek or German school, they will learn to read and write Greek if you stay in the country. They will of course become literate in German if that is their school language. For Arabic literacy, you would most likely need some external help in the form of private tutoring or Arabic classes.

That is a lot of languages to juggle! I hope my response has given you food for thought on how to proceed – please do ask further questions in the comments below (and let us know what you decide)!