Q&A: How to motivate a reluctant 3-year-old to speak the minority language? 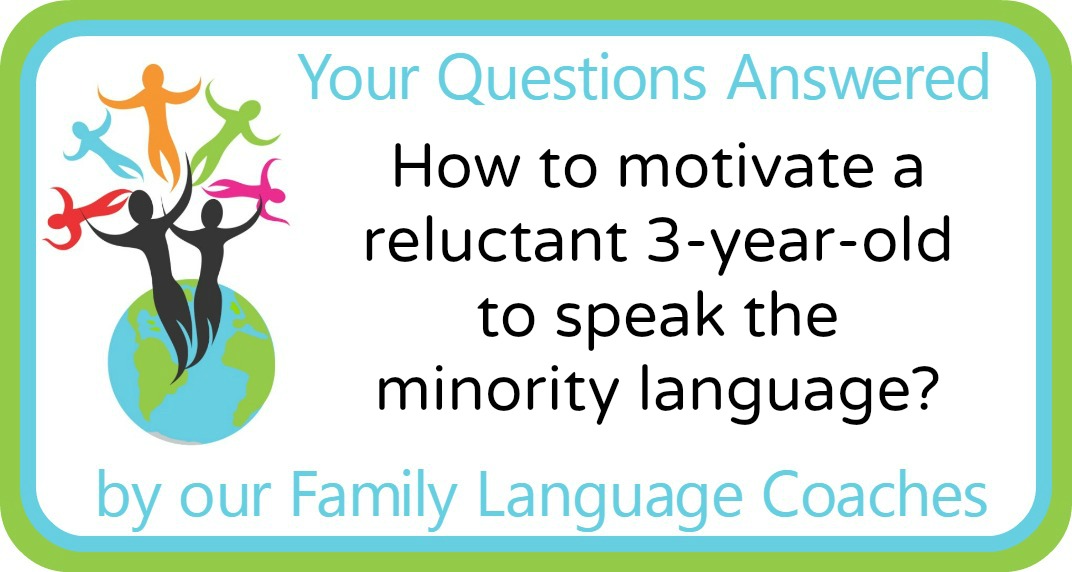 We live in South Africa, I grew up in Germany and my husband grew up Afrikaans. Our daughter is three years old and I speak German with her, while my husband (and the rest of the family) speak Afrikaans. At kindergarten she is also exposed to English, as the school is English and Afrikaans and every class has two teachers (one of each language).

Our house language is Afrikaans (between me and my husband), as I understand and speak the language fully as to where English is our work language, but we feel more comfortable in Afrikaans. Our daughter understands all three languages perfectly and there is no issue at all. She started speaking rather late, because she had hearing problems, which are fully sorted now and her speech improved after the last operation. But she refuses to speak any other language then Afrikaans.

It doesn’t matter in what language one asks her a question, she will answer in Afrikaans. Even when I ask her to repeat in German and tell her what it is, she will very seldom do so. I wonder if I did something wrong or what we can do, so that she speaks German as well.

My sister is here for a visit at this stage and we thought this might help. But except of two standard sentences she still speaks Afrikaans to her, even if we tell her that my sister can not understand her. The only thing she says is: I know, and goes on speaking Afrikaans. Or But I can’t.

We thought about a day or two in the week, where also my husband should speak German, to make her more comfortable using the language. But my husband is worried, because his grammar in German is not as good as well as, he does not know all the words.

Are there any tips you may have for us?
Aleksa

Thank you for your question about how to motivate your three-year-old to speak German, which is your native language.

First of all, I want to address your concern that you may have done something wrong as your daughter is unwilling to answer in German, but prefers Afrikaans. Let me assure you that you have not done anything wrong. On the contrary, by the sound of it you have done a lot very right:
– you have noticed and had her hearing related issues addressed at an early age
– your daughter is already speaking one language very well
– in addition to the one language she is speaking, she understands two additional languages – one which she hears at home (German) and the other mainly at kindergarten (English)!

Depending on how old your daughter was when the hearing problems were resolved, a certain delay in her overall speech development could be expected, both in the understanding and the talking, as well as specific parts of speech such as vocabulary and sentence structure. The fact that she is speaking Afrikaans clearly shows that there is the scope for her to learn to speak her other two languages as well.

Your daughter is currently comfortable in speaking Afrikaans, it is her preferred language. She is also used to everyone understanding her when she speaks it – this is her norm for an adult person. Your sister is perhaps the first adult she has met who does not fit this “mould”, so it is no wonder that your daughter uses Afrikaans with her auntie as well. The fact that your little girl does start off in German is a really good sign and if she were to get more interaction with other adults or children who do not understand Afrikaans, her attempts to speak her minority language would increase.

Children are very pragmatic in everything they do, including choosing the language they speak, so for your daughter to speak whichever language is easiest for her is a natural thing to do. So the question remains, how to motivate her to use German with you. For a child to learn a language, there should be a NEED (and a WANT) for it. What an adult may perceive as a need, e.g. “you should speak German with your mummy”, does not necessarily translate to a real need for the child. So the challenge for you is to create an environment where speaking German is a requirement for her to experience something positive.

Your suggestion about introducing days when all of you speak German is great. If your husband is willing to do this, it would be a fantastic way of German immersion days. He does not need to worry about making some grammatical mistakes or now knowing a certain word (he can always ask you!), because you will be your daughter’s role model for correct German. The fact that your husband is not fully fluent in German may even be a positive factor, as your daughter can develop her skills along with him. He would also be an additional bilingual role model, using both languages in the home. He could even ask your daughter for “help” in finding a word, thus spurring her on to use the language more. Children love being able to teach their parents!

You could also start watching some cartoons together in German, just so your daughter would get more used to hearing German from more sources. If you could set up regular online video-calls with German-speaking family and friends, and if at all possible, also children, this would be a great motivator for her. I know that small children often don’t have much patience for long calls, but try to find some activities you could do during the calls. You could learn songs and rhymes in German and then introduce these to your calls. It all depends on what your daughter is motivated by.

I know it can feel a bit disheartening that she is not answering you in German yet, but please bear in mind that she has come a long way from initially having an issue with her hearing to now being able to communicate in one and understand two more languages – and she is only three! Stick with it and keep on speaking, reading and singing German, play games in German and find every opportunity you can to expose her to other German speakers as well. The day will come when she starts using more German with you!