Q&A: How to pass on two minority languages, one of them being a rare language? 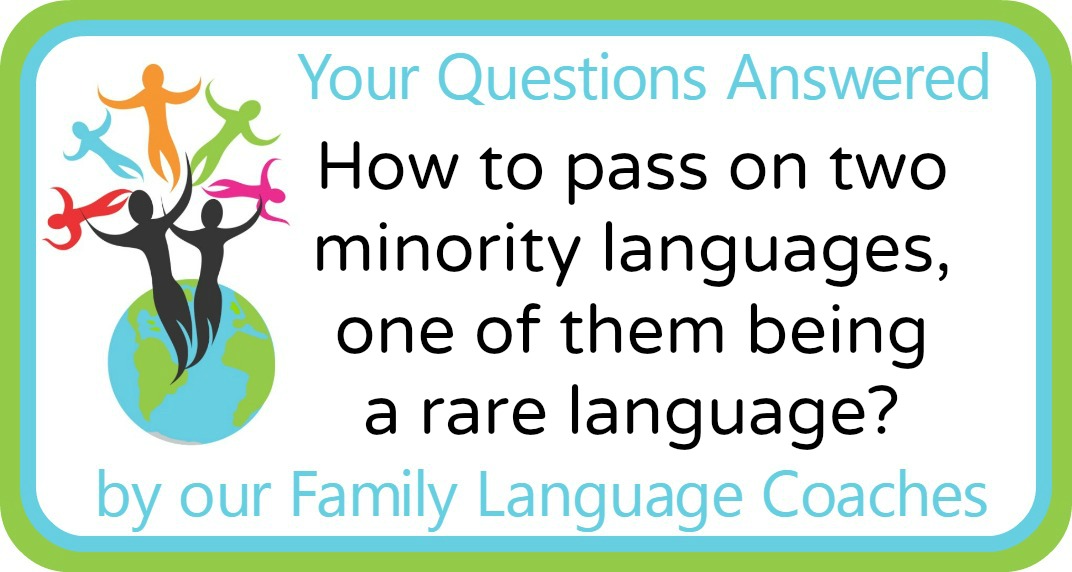 I am wondering what strategy to take. I am a native English-speaker who grew up bilingual in English and Assyrian. My husband is German, but speaks English to a native level. I am the stepmother to his lovely 6-year-old (monolingual) German speaking son, and I am pregnant with our first child together. I speak only German to his son (my German is not perfect, but we live in Germany and English causes him a little anxiety) and mainly in English to my husband, unless my stepson is around (then I switch back to German).

My ideal situation would be if my husband and stepson spoke to our child in German, and I spoke to my child in Assyrian and English. I worry about the success of this model, however, as I got a mixture of Arabic and Assyrian from my parents, but am not fluent in Arabic, despite being able to get the gist of most conversations and have very good Arabic pronunciation in Arabic when I do speak it (what little I do).

Thank you for your question about passing on English and Assyrian to your baby – and congratulations on the upcoming family addition!

It is great that you are thinking ahead and deciding on the language setup prior to your baby being born, as it is so much easier to choose a strategy before the birth of your child, than it would be to change languages after a while.

Since you live in Germany and both your husband and stepson will be speaking German to the baby, German will in time become his or her dominant language, so the question is about your two languages, English and Assyrian. By your description, English will always be part of your family’s language setup as this is the main language you and your husband speak with each other. This means there will always be some additional exposure to English for your little one – furthermore, English is probably the easiest language of all to find additional resources for and exposure to, both online and in the community.

This leaves Assyrian, a language you feel very passionate about, and – rightly so – would like to pass on to your child. As you mention, Assyrian is a rare language (UNESCO classifies it as ‘Definitely Endangered’) which unfortunately means that you will have a restricted amount of resources and less access to other speakers of the language.

Therefore, my recommendation would be to concentrate on the Assyrian exposure for your baby – it will take a lot of commitment from you to keep it going, but it can be done! It is not because I think that learning two languages in parallel from you is too much for your baby (I don’t), but I am more thinking of your own position. Making sure to get the Assyrian going is vital for future success – you will have plenty more opportunities to catch up with English with your child, than you will ever have with Assyrian.

You do not mention whether you will be staying at home with your baby and for how long, but it is good to keep in mind that as soon as he or she starts nursery or school, German will become the strongest language. If there is an opportunity for English daycare or a nanny, you might want to think about this option as the one to offer exposure to English.

Although your stepson might not be too keen on the English now, with positive encouragement, he may well become more interested in the language and you could start to increasingly use it as your family’s common language. Children are usually keen to be helpful so you could ask him if he would be willing to participate in occasional “English-speaking days” to help the baby pick up English. You could also sing English songs together, play clapping games or do other fun activities.

This way you would keep English going “on the side” for your little one, but you would stick to Assyrian when you speak to him or her directly. Once Assyrian is well established you can increase the use of English, but I would always keep Assyrian as the main language between you and your youngest to ensure it is maintained and develops.

I understand your concerns based on your own experience of not picking up fluent Arabic from your parents, but keep in mind that you are in a much better position since you are actively aware of the situation. My guess is that your parents never thought about arranging enough Arabic-only exposure for you – they spoke the way they did (mixing Assyrian and Arabic, which is the normal way to talk) and you picked up whatever you could. Now, your awareness, planning and commitment will make all the difference.