Q&A: How to pass on two similar minority languages? 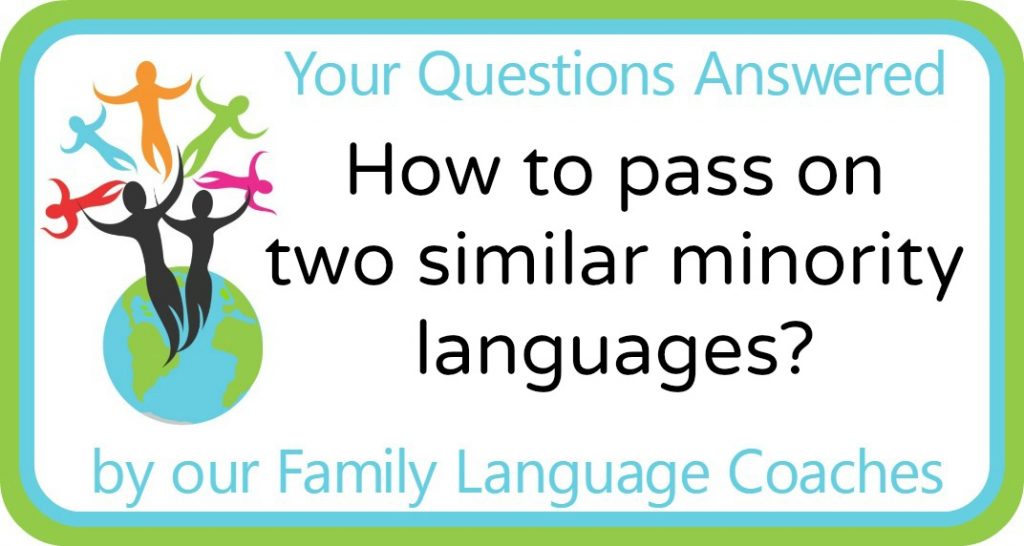 I’m currently expecting a child and I am really torn about what language/ languages we should be talking to the baby in once he/she arrives. My husband and I speak English at home, my family speaks Spanish and his speaks Portuguese and English.

I can understand a little Portuguese but don’t speak it (but I do want to learn). My husband can understand a good amount of Spanish when they speak to him slowly and he can speak a good amount too but is not fluent. My parents want me to teach the baby Spanish, so they can communicate. My husband’s parents feel the same about Portuguese. Because we speak to each other in English, I am torn about what language to speak to the baby in.

We live in the United States where English is spoken and most of our friends in town speak English too. I’ve considered the One Parent One Language approach, but I am afraid that the baby will mix up Spanish and Portuguese since they’re so similar, and then get even more confused if we introduce English either down the road or upon entering daycare/school.

Please help. I love our families very much and want my child to be able to communicate with them, but I do not want my baby to have issues understanding and communicating effectively because he/she is too confused between the three languages. I hope you can offer some guidance.

Thank you so much for your time and consideration.
Janny

Thank you for your question and congratulations on your upcoming family addition! Well done on thinking ahead and planning how to pass on your two minority languages prior to the baby being born – it is so much easier to follow a strategy from the start, than to later change the way you use languages in the family.

It is a common concern that children can get confused by many languages in a family, however, it is a myth. Children can cope amazingly well with switching between languages. In many communities, for example in Africa, children grow up learning four or five languages in parallel. Yes, children who are raised surrounded by more than one language often initially mix their languages, but this is a normal part of their language development and nothing to be worried about.

I fully agree with your thought to use the one parent, one language approach. Yes, Spanish and Portuguese are similar, but your child will be able to distinguish and learn them both. As mentioned, there may be some mixing to start with, but as long as you both keep consistently speaking your languages, your child will pick them up.

Of course, there also needs to be enough exposure to both languages. To ensure this, I would recommend that you start using your own languages in the home already before your baby is born – speak, sing and read rhymes to the bump! It is naturally easier for you, Janny, to do this, but do your best to convince your husband to have his own chatting (and singing, if he is up to it) moments with your growing baby. It will initially feel strange, as you are used to speaking English with each other, but remember why you are doing it. Imagine what it will feel like when your little child for the first time speaks with his or her grandparents in the right language! Keep this picture in your mind to motivate you to keep going when it feels challenging.

It is great that you both want to learn each other’s languages and can already know a bit of them. You will both notice that your Spanish and Portuguese skills will improve when you hear the other parent interact with the baby.

As there is only so much that you speak with a little baby, it would be great if you could also arrange situations where you speak your respective native languages with each other. I know this is not easy, as English is your common language and has been so for a while, but it would give you a kick start in getting used to speaking with the baby. Understandably you would not do this when there is something important you need to discuss but try speaking your languages with each other for example an hour a day, during breakfast or on Sunday mornings – whatever you find easiest to start with.

Because English will most likely continue to be the language you and your husband speak with each other, your child will also pick up English and learn to understand it. As you live in the US there will be plenty of English exposure from other children and adults, the media and the community in general. Once your child starts to interact with other English-speakers, he or she will soon not only understand, but also learn to speak English. So please do not worry, your child will learn English in any case. You should both concentrate on speaking your own languages with your little one.

Both set of grandparents are keen to see their future grandchild learn their language, so make sure to engage them in passing the languages on to the next generation. Invite your parents to babysit whenever possible. Encourage them to keep on speaking, singing and reading rhymes with the baby – even if it will be a couple of years before they get a response. Ask them to supply you with children’s books in Spanish and Portuguese. If your families live further away, keep in touch through regular online calls. See this post for more ideas.