Q&A: How to reintroduce a minority language to a speech-delayed child and a younger sibling? 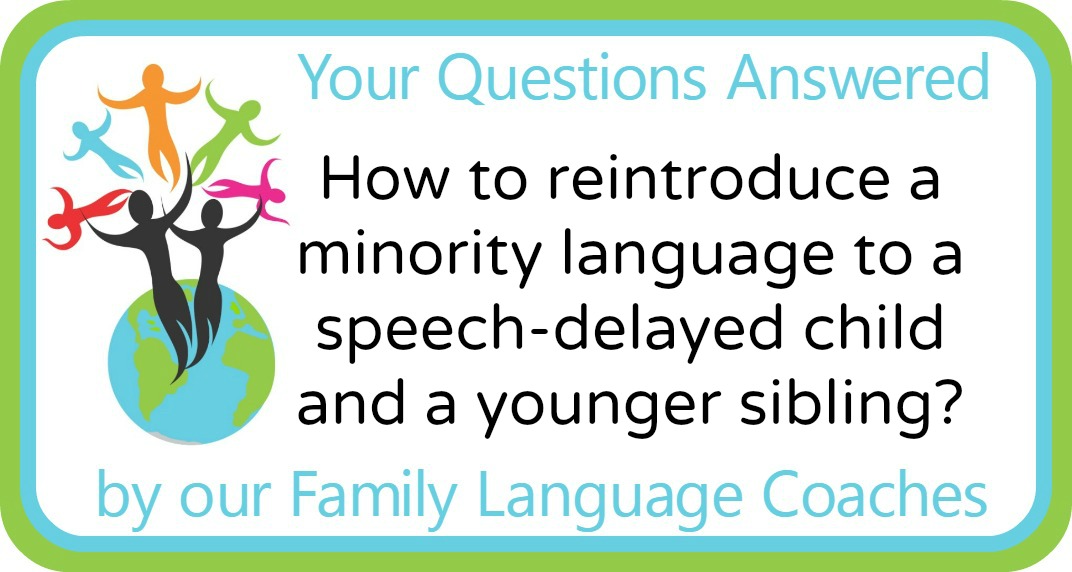 I am German and, my now, ex-husband is English/Australian. The kids spend half of the week with him and the other half with me. I used to talk German to my son from birth onward, but when he was diagnosed with a speech delay which was luckily very early, as I could see that his speech and sound making was not developing age appropriate, I got advised to only speak English with him so he can catch up.

The cause of the speech delay are ongoing ear issues. He also had grommets for a while and still has trouble with his left ear. We went to speech pathology and he started kindergarten and will start pre-primary next year, in a language development centre. He just turned five and made very good progress, but still needs to catch up a little.

I used to talk German with him till he was about two and a half and got then advised from two speech pathologists to only speak English with him so he is able to speak at least one language safely and maybe later, when he is speaking fluently, go back and start with German again. Due to that we spoke English all the time and his sister, three years old, has never heard much German.

I would like to start speaking more German again – at least when it’s just the three of us, as I like them both to grow up bilingual. My son still understands German but can’t speak, his little sister has unfortunately no understanding.

I don’t know how to go about it so she is involved when we talk, but without using English. As she is three already will she pick it up naturally, particularly as it is the minority language? I’m concerned that she will just go quiet and upset. I did try a few times but I had to explain her in English as she didn’t know what her brother and I were talking about, and said she doesn’t like it.

Any advice would be much appreciated! Thank you in advance.

thanks for your question and I am delighted to read that your little boy is making such good progress.

First of all, just to reassure you that your little boy can be bilingual. There is no need to drop a language. It’s also great that his understanding of German is good. It’s understandable too why your little girl might get upset when she doesn’t understand what is being said as she may feel excluded. And if English has been the primary language of your relationship, then that is the language she associates most with you.

I would suggest to start out with you spending some time with each child individually where you speak German. The key here is that their language level in German is different, so the input from you needs to be at their level. Reading together with your little boy is a natural way of having one language input. Or watching cartoons together in German and then having conversations about what happened and what you thought about the different characters. I have a free e-book called 25 Ways to Make them Love your Language – if you email me at marypattalknuacom I will send it to you. It has lots of activities for encouraging development of the minority language in a fun way. How about some German comics or games that he might enjoy? Also, opportunities to use German with family members or on holidays.

And for your little girl, how about watching some songs in German and learning one that she likes together? It’s important to sing the song slowly and then as she gets used to it, you can sing a line and leave a space for her to fill in the word. Here is an example of how to do it.

Again, reading books together is a lovely way to spend quality time together while using German – you could start with simple books with photos of common objects around the house and so on in order to build her vocabulary.

It is also natural for children’s attitudes to their languages to vary. My little girl goes to an Irish language school and when I speak Irish to her at home, she tells me to stop! I just say something like “You don’t like me speaking Irish, huh?” then I switch back to English and try again later. Both of your children might well go through phases where they reject the minority language. And of course, the minority language is vulnerable to loss. However, the main thing is not to give up – it’s a long-term project and even if they don’t use it, you can develop their comprehension by speaking to them in German. I would focus on my own language use and if they respond in English, I would just respond in German. You can’t make them speak it; you really only have control over what language or languages you choose to speak to them.