Q&A: How to introduce a family language to older children? 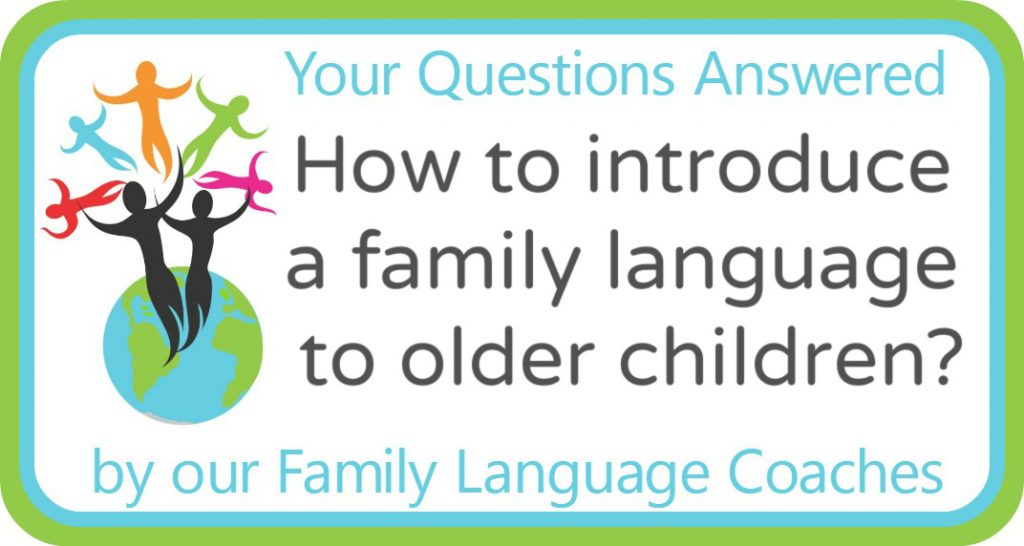 Thank you for the helpful articles!

My husband’s mother is Finnish, and all her family is living in Finland or other parts or Europe. Fortunately, they all speak English well so we all can communicate well. However, my parents are Korean American and although they have lived in the US for almost 40 years, they prefer to speak in Korean, their family language.

My kids are now 11 and 13 years old and I really wish I had taught them Korean so they can better communicate with my Korean speaking family. I’m thinking of enrolling them in Korean language classes. My 13-year-old will be taking a foreign language in High School in the fall, but Korean is not an option.

Thank you for your question as it is a situation that many families encounter when their children are a bit older and they didn’t speak a family language regularly. You don’t mention where you live right now. Is there a Korean speaking community? Are there peers who could speak Korean with your children? I understand that you haven’t spoken Korean with your children so far, at least not on a regular basis. What is their opinion about learning Korean now?

As Korean is not an option at school, I would suggest that you start as soon as possible, when you and your children are ready, to introduce the language.

You won’t necessarily need to “teach” them Korean in a formal way, but you can start with repeating the sentences you say in English, in Korean, in order to model the language you want them to learn.
I would start with topics that your children like – music, sports, what they like reading etc. I would suggest you start in the weekends, when they are less tired from school, and when you all have more time to talk and communicate.

I mentioned before that it is important that your children are willing to learn your family langauge, Korean. They should agree with this plan and I would suggest you make it “official”. This worked perfectly with some of my clients who introduced a family language later: when children committed officially to learning the new language (yes, they signed an official agreement; if you want, I can share a sample with you) they are motivated and invest more time into it, which is necessary. The reason for emphasizing this official aspect is because 13-year-olds want to be in charge, and they need a clear guideline or plan for whatever they commit to.

You can start with a few hours in the weekends, where you can talk about topics they are interested in, or that they are studying for school, and introduce some key words here and there, modelling all they are saying in Korean. I suggest that you are in charge of the language because you are the main reason for them to learn the family language.

You can also enrol them in Korean language classes, but I would combine these with what I just mentioned you would do with them at home.

In whichever way you introduce Korean, they need to be ready for it and find it interesting. Also ask your parents if they can help you with this; if they would agree to speaking Korean with your children, at least every now and then.

I have one last question: how fluent do you want your children to become? If you want them to become fluent in speaking as well as reading and writing, it might take a while. If your main goal for them is to be able to speak and maybe read, I personally think it would be a more realistic goal to achieve in the next five years, especially if you consider that the expectations for other subject areas is going to be increasing in the coming years. Nevertheless: it is never too late, and it is always worth it to learn a home language!

I am looking forward to your responses and wish you all the best!