Q&A: How to introduce German alongside three other family languages? 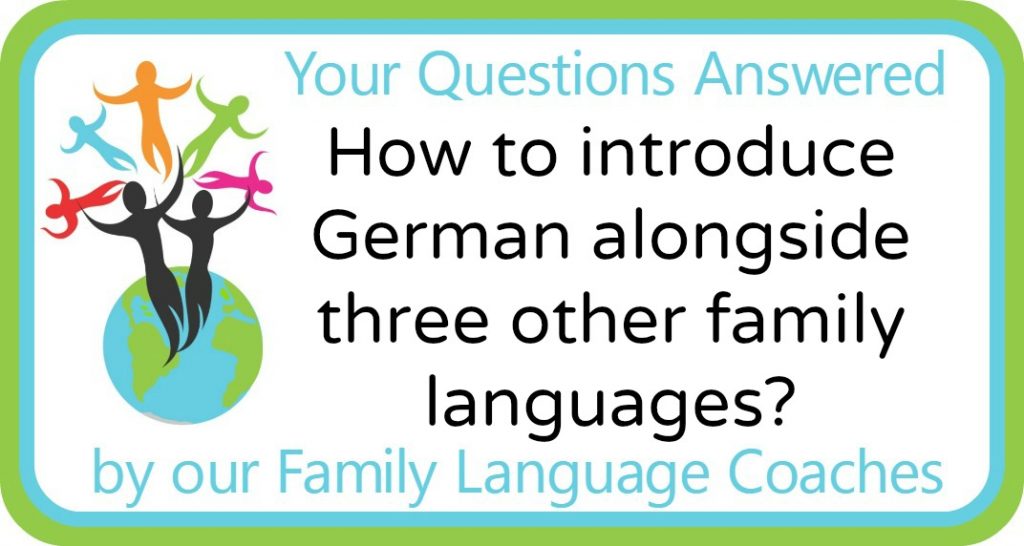 My name is Wioletta and I am a Pole who has lived in England for 12 years now. My partner is Scottish. We have a 3-month-old daughter to whom I speak exclusively in Polish and he does in English and Scottish.

I am wondering about introducing German to her as I hold a degree in teaching German. I tried speaking it to her before, but it felt quite unnatural. I worry that I will overwhelm her with the third (maybe fourth, if counting Scottish as a separate language?) language.

I am passionate about foreign languages. However, I do not have any German speaking friends or relatives in Germany (as opposed to relatives in Poland). All I do is listening to German radio and reading German books these days. Additionally, I will not be going back to work for several years and only focus on raising her and hopefully her sibling.

We live in a small town in England. My partner speaks neither Polish nor German. What would be the best method of teaching her Polish and German in your opinion?

Thank you for your time.

Thank you for your question about introducing German to your little daughter.

It is perfectly possible for you to teach German to your daughter alongside passing on your native language, Polish, to her. Since you will be staying at home with her for several years, you will have plenty of time to introduce German as well.

Before we go into this in more detail, I would recommend that – if you haven’t already done so – also discuss this with your husband. Would he want her to grow up speaking Scots as well? As you live in England, she will sooner or later pick up English, so there is no doubt she will become a native English-speaker. Since your husband does not speak Polish (nor German), and I take you do not know Scots, I presume that you and your husband speak English together. In other words, there will also be English spoken in your home.

I ask about Scots, since if your goal as parents is for her to also learn Scots, then this is something it is wise to consider now. My recommendation would be that your husband sticks to Scots only with her, if he wants her to become fluent in the language. Otherwise it is highly likely – especially after your daughter enters (nursery) or school – that English will take over as the language between them.

You have tried speaking German with your little girl, and it felt unnatural, so you stopped. I fully understand your reaction and I agree, that no matter how we communicate with our children, it should feel natural and comfortable. Instead of switching to speaking German with her, I would recommend that you start with children’s songs and rhymes. This will make you used to using German with your daughter and her to hearing it from you. Whether she understands what you sing or say is not important at this stage. Let this phase continue until you feel more comfortable with German occasionally being the language of communication between the two of you.

Once you feel fine with the idea of using German, you can start reading short stories in it. Then continue with playing certain games and perhaps dedicating an area in your home to the German language and culture. In this space you can listen to German music together, sing, play with monolingual toys, and read books. The next step would be to start speaking German at certain times of the day, for example in the mornings after your husband has left for work.

Since you are going to stay at home with her for several years, there is no need to rush this – do it at a pace that feels fine and gradually increase the amount of German. When she is a bit older, you can watch children’s programmes together, and – depending on her level of German – perhaps follow some ‘German for children’ courses. Check out Goethe Institut’s pages for ideas.

If your aim is for your daughter to become fluent in Polish, Scots and German (in addition to English), then you need to consider how much exposure she will get to each language over a week. If Scots is important, then I would recommend that you do not use German when your husband is at home, so not to take away any of the Scots exposure.

Children can cope with several languages, so you will not overwhelm her, however, whether she will pick up a language or not depends on the amount of interactive exposure she gets to it. Discuss with your husband, prioritise the languages and decide what is important to you. Should you need any assistance with setting up a family language plan, please let me know.