Q&A: How to introduce a third language to a bilingual toddler? 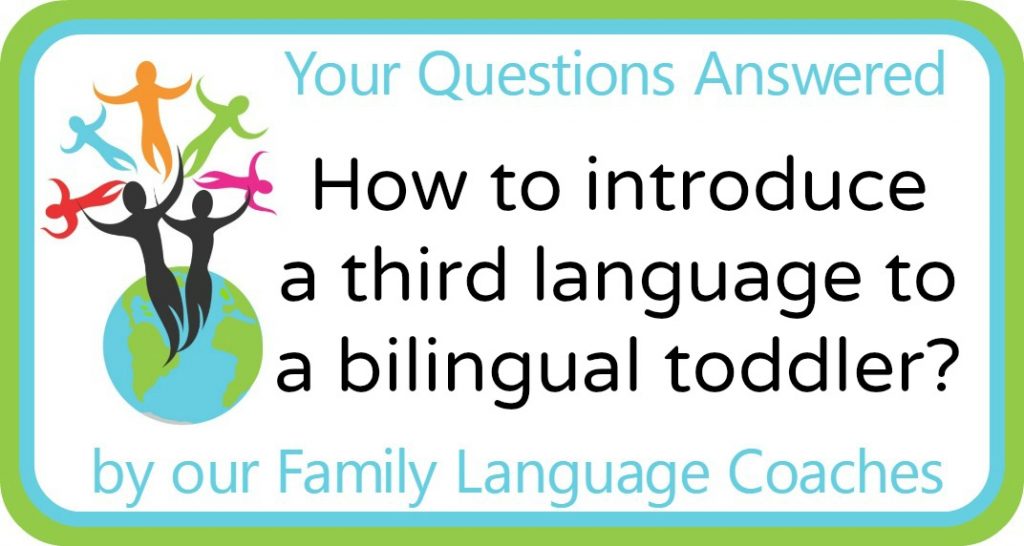 I have a question about how I should go about introducing a third language. My 2-year-old is currently bilingual (English, Bosnian). I speak both languages, my husband speaks Bosnian and some English, so I am the one who speaks nothing but English all the time, and husband does a combination.

I am also fluent in German and would like to expose my son to that language as well. How do I go about doing so without confusing my son as I’d still like for him to keep English as his main language? I’m a stay at home mom and have the time and desire to do whatever it takes.

Thank you for your help,
Maja

Thank you for your question about introducing German to your bilingual toddler son, while maintaining his two current languages, English and Bosnian – with English as the main language.

As you are staying at home with your son, the introduction of a third language will be easier as you have more time to share between the two languages. You do not mention where you live, but I will presume that you are not living in a German-speaking country, and will not have daily opportunities to immerse him in the language in the community.

Please do not worry about confusing your son – it will not happen! Unless you at some point switch to speaking only German with your son, English will remain the main language between the two of you.

My first recommendation is to create plan for how and when you will use German with your son. Why a plan? Simply because it is so much easier to stick to a routine when you know exactly when your next “German session” will take place. If you rely on remembering to occasionally speak German, it can easily happen that other things take priority and the German is left by the wayside.

You can start introducing German straight away through simple songs and games. Don’t worry too much about him not understanding the meaning to start with, just get used to the sound of the language and play around with it. You could listen to German children’s songs together and learn the words – if it is a song that your son already knows in English or Bosnian, it is even better, as the tune would be familiar to him.

My favourite way of introducing a language to small children is by using monolingual toys. Read the linked-to article for ideas on how to use hand puppets, teddy bears or any other toy to bring in a language for your little one. You can create a German language corner in your house, which is dedicate to the language and its culture. Whenever you spend time in this area, you would speak only German with your son – read, sing, and play.

If your son watches children’s TV or videos, then this is a great way to bring in German. You will find lots of programmes on YouTube and on German sites. Always watch the programmes with your son and speak about what happened on the screen afterwards. I would also follow the general recommended screen time limits based on your son’s age.

When your son has learnt a bit of German you can introduce some German-only time (according to the time and place strategy. This could be for example two-three hours each afternoon when you are alone with him or any other suitable time.

If you can find a German playgroup, this would be a fantastic incentive for your son to pick up some German. Alternatively you could reach out to other parents and see if there is interest in starting German playgroup for toddlers!

Here are a few sites where you can find inspiration and resources for introducing your son to German: Goethe Institut  Mein Sprachportal