Q&A: Language elitism and how to address it 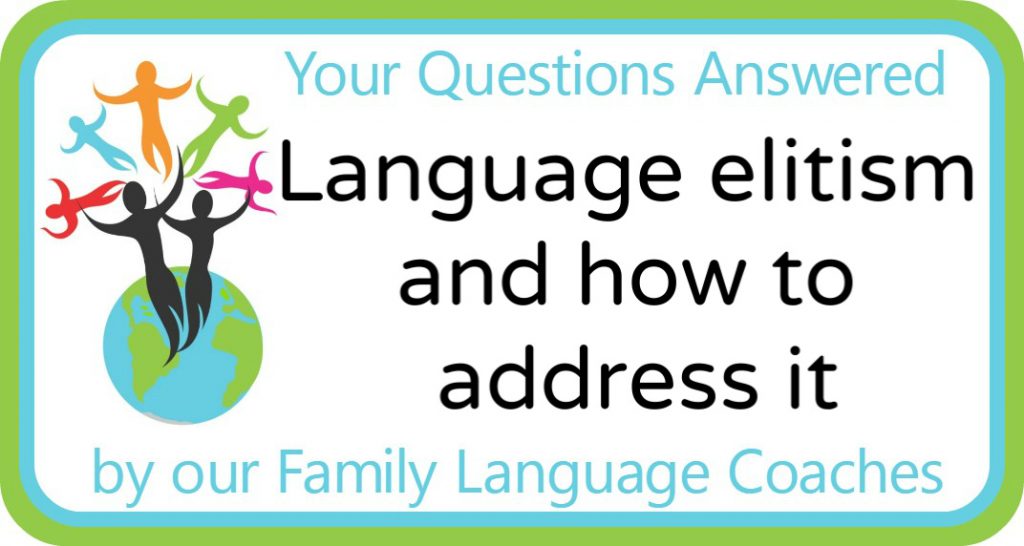 I’m a Russian mother living in the U.S with my two sons, ages 13 and 9. I may be an odd one out compared to other parents in regard to languages. My husband and I speak a mix of Russian and English, and though my boys understand Russian, they prefer to speak in English. I am personally fine with this and don’t feel this pressure to force them to speak in Russian (but I’m very happy to help them out whenever or if they want to speak).

However, I just want to get something off my chest about language elitism, and thought I can just address and bounce it on a post written here a some time ago in regard to a mother speaking English to her son and others claiming it’s not “real English”, which I think is ridiculous.

I have had some experiences similar to this where I have gotten negative comments from others in my local community on how I am failing my sons because they prefer to speak in English, and that they will lose their Russian identity or cannot connect with the culture, which I find false. I also have been criticized for not speaking Russian ONLY at home.

In terms of accents, there are children I know who do speak their heritage languages well but are mocked because the accent is not right. Another example, I have a Chinese friend who was shamed by other Chinese only because she was never taught Mandarin, even though she grew up in China. However, she grew up in Shanghai, where Shanghainese is the dialect spoken.

I think multilingualism is a fascinating phenomenon and should be encouraged. But I personally don’t find it an offense if someone doesn’t speak their “mother tongue” or additional languages, or if parents aren’t too particular with the language situation with their kids (like I am). The reason why I say this is because I personally noticed that there are folks who do, and who are taking this concept to another level, where they are using languages to define one’s worth and to define them. Things like “You are less x or y because you don’t speak this language fluently or even natively”. I hear this a lot from many people I know who have experienced this, and they start to feel regret, shame, inferiority. Or you are not a “real ”.

When getting comments about the language situation with my sons, I feel lost in how to respond without being angry or annoyed. I always expose them to Russian culture and language at home because it’s part of who I am, as well as my husband. I don’t hound on them anything and let them explore our culture while living in the U.S, without any pressure.

In my view, their identity is theirs to define and I tell them to navigate and explore multiple cultures, Russian, American or others and see what they want to take from it (good thing we live in a multicultural community). They claim they are Russian Americans as they enjoy things from Russian culture. We do go to Russia every few years and they still have a very good bond with my and my husband’s parents (and it does help motivate them to speak a little Russian!).

Thankfully my family is very understanding about it and don’t see my sons as “less Russian” due to their language abilities. However, not everyone sees it the same way. I’m not sure how or what are the best ways to address this when people make such remarks. My Chinese friend also feels the same and at times feels she “less Chinese” because she doesn’t speak Mandarin, even though she speaks a different Chinese dialect.

I have written this because the mother who was mocked for speaking non-native English with her son caused a spark in me to address this. I was wondering if you could comment on this sense of “language elitism” since I can somehow relate to that poster, and how to react without starting a flame war. Also, I hope I didn’t offend anyone, and if they felt I did or they disagree with my post, please let me know. And if I did, my apologies.

Thank you for your heartfelt message about language elitism and addressing others’ inconsiderate comments about how you choose to raise your children. Please do not apologise, you have nothing to apologise for. You have put your point across well and clearly and if anyone feels offended by that, it is their problem, not yours. Language elitism has no place in a respectful discourse.

I have said it before, and I say it again: Each family should make and be allowed to make their own decisions when it comes to raising their children, including which languages they speak and to what extent. Your children are safe, fed, loved and educated – all is well. Which language(s) you pass on to your kids, and all the rest is no one else’s business. However, we know that people still comment. And language elitism can really hurt.

When it happens, you have two choices. You can engage in a conversation and do your best to put your point across. Alternatively, you can just acknowledge the comment, then smile and move on to another topic or away from the situation. In any case, please try to raise above the situation without getting annoyed or angry. It is not worth your time nor your energy, which I am sure you have better use for.

Look at it this way: You have thought through how you want to go about sharing your family’s Russian culture with your sons and you have found what is natural and what works in your family. Clearly you have been successful as your sons identify themselves as Russian Americans. They understand Russian and you are ready to support them should they want to further their language skills, but you leave it up to them. This is fine. It is your choice and should be respected.

Next time when someone comments negatively about your approach, first decide whether to choose the engage-in-conversation or the smile-and-move-on approach. Only choose the first option if you think the person is open to listening to you and maybe willing to think again and not make such unnecessary, hurtful comments in the future. Try to keep calm and remember, you do not have to defend your decision. Hold your head high, state your position and – depending on the other person’s willingness to listen – explain why their comments are inappropriate.

The same goes for your Shanghainese-speaking friend. Criticizing her for not speaking Mandarin is a sign of ignorance and could be compared to a German being blamed for not speaking French. Shanghainese and Mandarin are two different languages, and she happened to be brought up with Shanghainese. Equally, anyone commenting on someone’s accent is out of line. We should celebrate all the languages, dialects and accents and encourage any speakers of them.

I am happy to hear that your extended family is supportive. They know you best and understand your situation. What might also be interesting for you and your sons is to explore the concept of “Third Culture Kid” (TCK). By definition, a TCK is someone who has spent a significant part of their development years outside their parents’ culture. There are many benefits to growing up as a TCK, while the situation of course also comes with its unique challenges. I can recommend the book  “Third Culture Kids: The Experience of Growing Up Among Worlds: The original, classic book on TCKs” to learn more.

Thank you again for bringing up the topic of language elitism, it is very important.

Wishing you a successful bilingual and multicultural family journey!