Q&A: How many languages can a child acquire in a multilingual family? 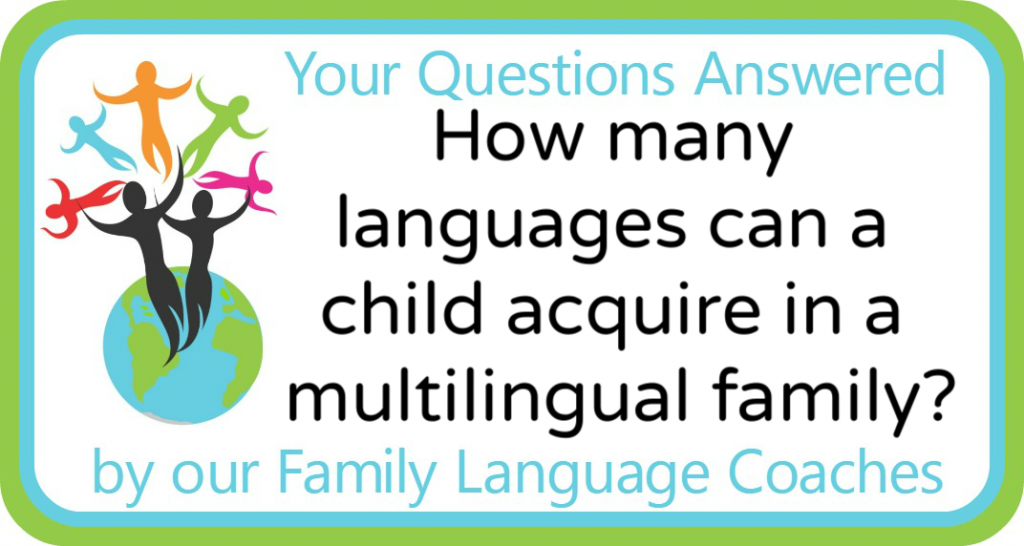 My name is Alexandra, I have a 10-month-old baby and I would like some advice about teaching her multiple languages. I come from Romania, my husband is from Mauritius Island and we live in Germany, but we speak English with each other.

My native language is Romanian (speaking daily with family and friends from home). English we speak at home and German socially with friends, colleagues etc here where we live. My husband speaks Creole (native language) with family, English, French, Romanian and German.

We would like to teach our baby both our native languages, English because this is what we talk at home and French or German (planning to move from Germany in about two years, but still considering that knowing German would be a good asset).

I am the main caregiver of the baby and planning to stay home with her until she is at least two years old. My husband comes home late in the afternoon when it is almost her sleeping time. He is home with her in the weekends.

In this situation, what methods should we use in order to teach her other languages? How many could we teach her from now on? Currently I speak with my daughter three languages and I don’t know if I’m not confusing her too much. I speak for one week Romanian, the next week German and when my husband is at home we all speak English.

I would very much appreciate your answer.
Thank you,
Alexandra

Thank you for your inquiry. Yours is truly a polyglot situation with your numerous languages between you and your spouse!

Before I begin to answer your questions, I have created a diagram to understand your multilingual family language setup. Please correct me if there are things I have misunderstood. I also have a few additional questions for you.

You only mentioned that you speak English with your daughter when you are together. Does this mean he only speaks English, or does he also speak (or plan to speak) Creole with her? As an observation, transmitting Romanian to your daughter will ensure that she is also able to communicate with your friends and family in Romania, since this is how you currently communicate with them.

However, what about friends and family in the Mauritius Island. Will she be able to communicate with them in English or French or will she need to speak Creole as your husband does currently? This brings me to an additional question about French. Is your desire to potentially teach your daughter French related to the fact that it is one of the official languages in the Mauritius Island? You didn’t specifically mention it, but do you speak French?

As far as your method is concerned, time and place is an excellent way to make a clear distinction between languages and to transmit multiple languages (three in your family situation: Romanian, German and English). So now you would like to know how to transmit additional languages: French and/or Creole.

My personal feeling is that more than three languages becomes challenging not because it will confuse the child, but because it means that each of the languages receives less quality time. To create an optimal learning environment, I would recommend limiting yourselves to three languages while she is still young.

As a suggestion, I would advise that your husband also speak to your daughter in the heritage language he wishes to transmit (either French or Creole). Your family language could remain English and you could continue to transmit Romanian and/or German. Also, as a suggestion, as you will only be in Germany for the next two years, consider temporarily dropping the German.

In conclusion, you would speak Romanian to her, your spouse would speak French or Creole to her, and your family language would be in English. This would allow you to transmit three languages in a solid manner. She would also most likely acquire German passively as it is the community language where you live, and as you use it in diverse social and professional situations.

Based on the information you gave and what I perceive to be your family language goals, this is one scenario I have created for you that would allow you to qualitatively transmit three family/heritage languages.

All the best to you in your language endeavors!