Q&A: Literacy: how to teach reading and writing when exposure time is limited? 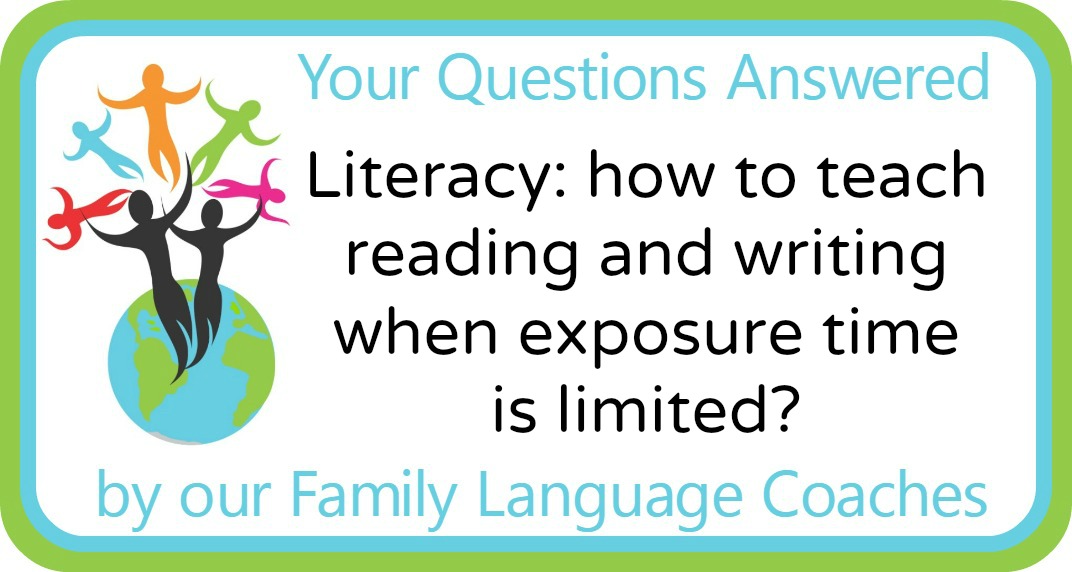 I am a German native living in South Africa. My husband is South African and speaks to my 3-year-old son English and the local language isiSetswana. I solely speak German to him. Since he goes to an English creche, English is his main language.

He started speaking quite late due to the exposure of three different languages, but he is doing quite well in English now. He responds to me in English and German, usually mixing both languages but I am quite confident that this will improve over time. He only understands isiSetswana and does not speak his father’s language.

I understand that we have to be realistic in terms of the level of proficiency my son will speak all three languages. I am however concerned that his level of proficiency in German will only remain at a medium level, and I am not sure whether I will be able to teach him how to read and write in German.

The German school is quite far from where we stay. Moving closer to the school would mean that I would spend less time with both my children due to travelling. I read that a child should be exposed 30% of his day-time to the minority language. I am trying my best through, e.g. reading books, playtime, audio books, videos, visiting German friends etc, but it is usually only two hours a day. My time is limited as I work full-time and have to look after his six-month old brother too.

Please advise me what else I could do.

Thank you for your message about your son becoming trilingual!

First of all, I want to emphasise how well your son is doing, and that you should be immensely proud of his progress! He is only three and can speak one language (English), is well on his way to picking up his second (German) and understands a third (isiSetswana).

A child can learn three languages in parallel – as long as there is enough interactive exposure to each of the languages. By what you write, he is surrounded by English during the day, so his English-skills will be developing at a fast pace. In addition, you are managing to arrange two hours of German exposure each day, which is fantastic. You are right about the mixing of languages – this will decrease by time, for now it is what I would expect him to do.

The requirement of 30% exposure time (of waking hours) for a child to acquire a language has not been proved through research. It is a good goal to have, but I know from experience that a child can learn to speak a language with less exposure, so please do not focus too much on that number.

What is more important, is the quality of the exposure – and you are doing all the right things by varying the type of exposure, reading a lot and making sure he can also interact with other German speakers. There is not much more anyone could ask you to do at this stage. As you say, we have to stay realistic and also, we must not make the focus on language something that makes the family life too difficult.

With regards to literacy, you can find helpful free resources on the net and use them as and when your son shows interest in learning to read (and write). To encourage this, make it a habit to follow the text in a book so that learns to make the connection between the spoken and the written form. There are several websites you can use, but I would like to mention Goethe Institut and Mein Sprachportal (Austrian) – also check out LegaKids for helpful games.

When it comes to isiSetswana – the most effective way for your son to learn it wold be that your husband spoke exclusively isiSetwana with him. If this is not viable, are there for example local playgroups in the language that your son could attend? Also keep in mind, that even if your son were not to become fluent in all three languages at an early age, he can learn when he is a bit older. It is never too late to learn a language!