Q&A: How to maintain a family language once a bilingual child gets immersed in the majority language? 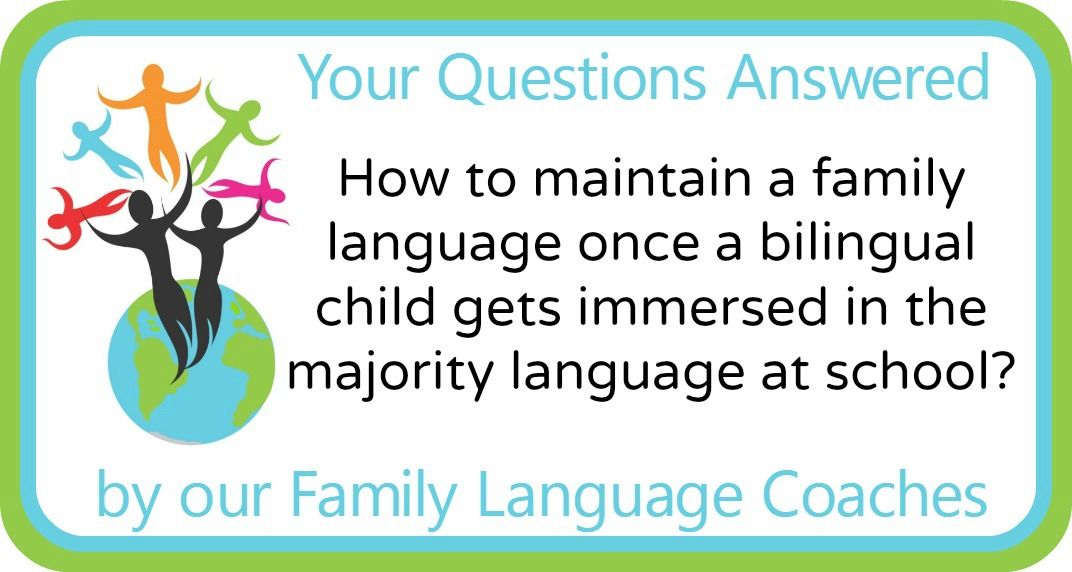 We are a family who lives in Catalonia, Spain, we speak to our 2-year-old son in French because before he was even born we already spoke in French since we met up in Switzerland, even though any of us is French, we feel totally confident with it.

My worries are that my son will attend a Catalan school which means that even though at the moment he says more words in French than in Catalan, the moment he starts school, except from his dad and me, he’ll communicate with everyone in Catalan.

Will he still speak in French to us and get to the same level as in Catalan? He now already understands Catalan because everyone in the family speaks to him in this language.

Does every child get to the point of refusing the minority language during the teenage years? How to avoid that happening?

Really looking forward to your kind reply which will be of great help to me.
Roser

Thank you for your question about maintaining your son’s French as he grows up and gets more exposed to the majority language, Catalan.

It is true that your son will become fluent in Catalan very soon once he starts attending school. In a couple of years Catalan will most likely also  become his dominant language. However, this does not mean that he will automatically reject your home language, French. The important thing is to establish a solid routine of always speaking French as a family. Doing this as a young age is the best guarantee that he will maintain his French.

Once he starts school, there may come situations where he comes home and prefers to talk to you in Catalan. This is normal behaviour after having spent a whole day immersed in the language – don’t take it to heart, it is not a “rebellion” against French or you, just stick to French and do not respond in Catalan, even if your son were to speak it with you. Children are pragmatic and naturally use the language they feel most comfortable in – read my post: When your bilingual child goes to school for more ideas on how to prepare for this phase.

While I can understand your concerns, keep in mind that you are in a great position in that you only speak French at home. This means there is no question about choosing which language to speak – in contrast to families where only one parent speaks a minority language.

You are all already accustomed to using French at home – build on this by introducing games and other activities where your son will have to use his French in different ways. Consciously introduce new vocabulary though fun activities. Speak while you go about your everyday lives, describing what you do – it may feel strange, but just remember why you are doing it!

Check in your area if there are other French-speaking families with same-aged children and see if you could arrange playdates for your son. Maybe you could even start a group for parents who want to immerse their children in French?

If/When your son watches children’s programs, make sure most of them are in French – I always recommend that parents watch together with their children and discuss the characters and what happened in the story. I know this is not always possible, so should he watch on his own, be interested in what he has just watched and ask him to tell you what he just saw.

Read lots of books in French – be articulate and engage your son in the story. Make it interactive by occasionally putting the book down and asking, “What do you think happened next?” The important thing is to create situations where your son wants to express himself, and there should be a need for him to use French in these situations.

When your son grows older, change the activities accordingly – he will get new interests and want different activities and games. Foster any relationships you have with French-speaking families where there are children of the same age as your son. Should you not find these in your area, could you connect him with children in Switzerland?

If you can, arrange frequent visits to places where French is spoken as the majority language. Being fully immersed in the language, not only via the immediate family, but everyone in the community, media and art is the most effective language booster for a child of any age. When he is a bit older, maybe you could send him to a summer camp in Switzerland or France?

I have full confidence in that you will succeed in raising your son to become fluent in both in your family language and the community language and that French will remain as the common language for all of you.