Q&A: How to maintain a five-year-old’s English when the majority language changes to French? 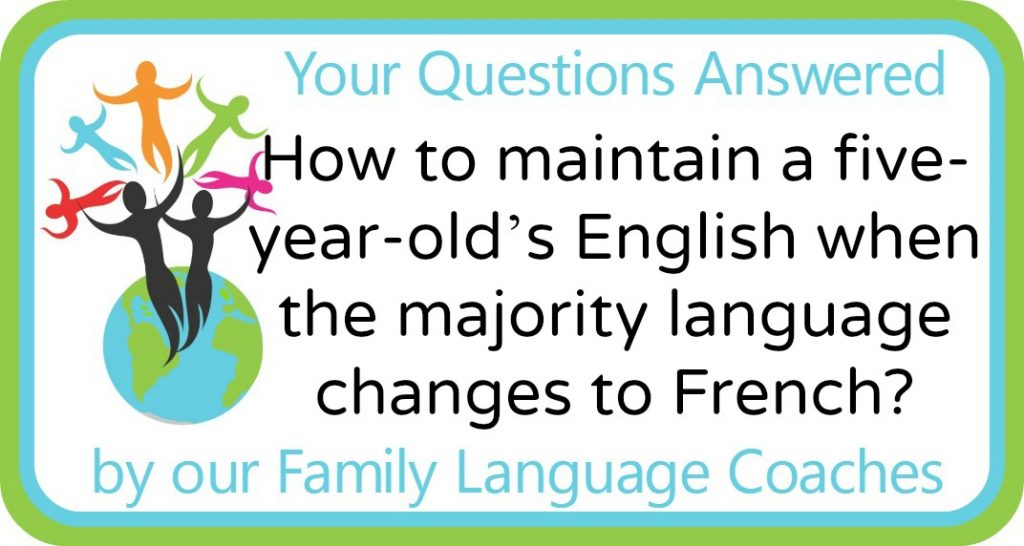 My daughter Ophelia is five years old. She was born in the French Caribbean, I am English, and her father is French. She attended a French nursery until last year and could speak French very well (for a 4-year-old!). She has always spoken English with me, since I do not speak French.

Unfortunately, we were affected by the devastating hurricanes last year and myself and my daughter moved to England where she started English school in year R. She has thrived and is starting to read, since we returned she doesn’t want to speak French and says she doesn’t understand when her father tries to speak French with her via Skype.

My daughter and I are moving to Montreal due to my work and she will be attending French Kindergarten and then moving on to a French school for her future education. I am now a single parent and I am worried that I will not be a part of her education in the future.

My question is, how can I give her an English education whilst she is at school in Canada? What learning tools can I support her with so that she doesn’t fall behind with English speaking, writing and learning?

Any advice you can give me will be greatly appreciated.

Many thanks and kind regards,
Emma

Thank you for your inquiry, I hope I will be able to offer you some advice and direction for your bilingual journey with your daughter.

If I understand correctly, your daughter Ophelia has been raised bilingual in a French-speaking environment and with an English-speaking mother (and more recently in an English-speaking environment and school. You are now concerned that when you move to Montréal and Ophelia is schooled in French that she may lose her English in a similar fashion as she claims to not understand French anymore.

It’s easy to feel overwhelmed by the task ahead when you realize your daughter will most likely adopt the community language (French) in Montréal and that you will be alone in transmitting the minority language and mother language (English) to your daughter.

First of all, take comfort in the fact that she has been raised bilingual in her first five years of life. Rest assured that she has solid bases, even though it may be at an elementary level. Take comfort also in the fact that the two of you have always spoken English. There is an emotional bond that is created in the primary language(s) spoken between mother and child that is difficult to erase.

If it is what both you and your daughter desire, continue to speak English at home even when you live in Montréal. This will create a continuity in your common language and will help your daughter feel grounded through the transition of changing countries yet once again. Talk with your daughter. She may only be 5 years old, but can already understand so much. Explain to her how important it is that she continues to speak English. Ask for her opinion of how she thinks she might be able to maintain her English even though you will be living in a French speaking community. Getting her involved in the decision making will help her feel responsible and increase her motivation to maintain the English language, even when she will slowly but surely adopt the French language.

There are other things you can do as well to maintain English after moving to Montréal, where the majority language is French. Keep her interest level high by varying the activities and motivation. Here’s a list of a few ideas:

– Learn English nursery rhymes or songs and playing anglophone music in the home.

– Keep your English culture alive through decorations in your home, movies, food, etc.

– Watch movies in English (especially easy to do with most DVD’s and Blu-Rays).

– Trips to England to visit family and friends so that there is a real need created to speak the language.

– Visit other English-speaking areas (in Canada or the United States, for example).

Tell your daughter how important it is for you to have her speak your mother language. Get her involved and make the learning process as fun as possible. I think you’ll be pleasantly surprised at how well she will do.

Best of luck to you and please don’t hesitate to write again!