Q&A: How to maximise the family minority language exposure? 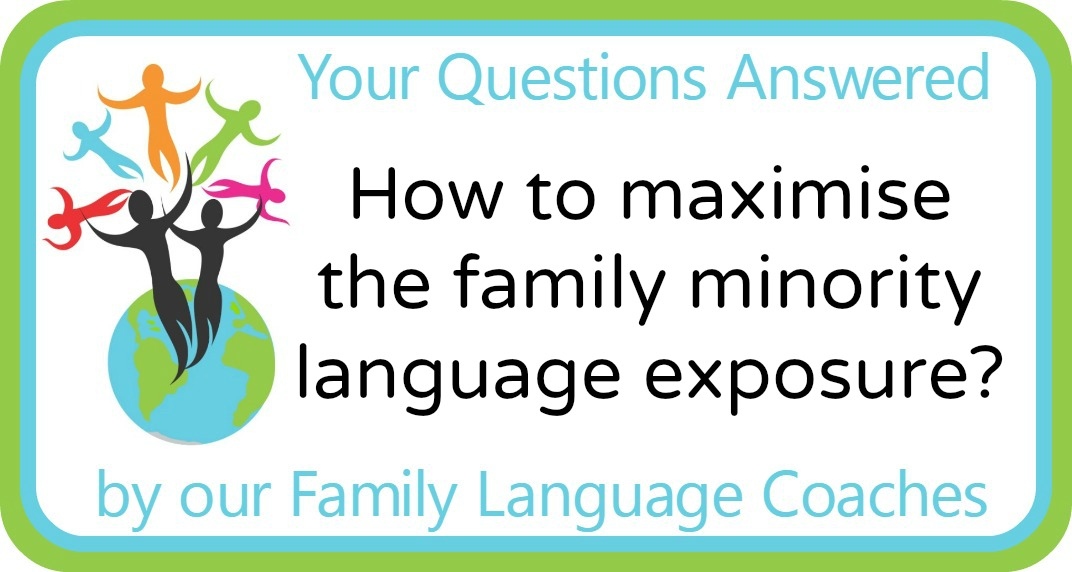 I’d be so grateful for your advice.

I am bilingual French-English. My husband speaks French, English, German and Swiss German. We started off living in French speaking Switzerland so I started speaking English at home to our then new-born.

When the time came he went to pre-Kindergarten in French. When he turned five, we moved to Bern where he picked up Swiss German very fast. We moved to New York when he was 6/7/8 but he was able to get bilingual French/English in school. We have been back in Bern for a year now. He is nine and is trilingual.

My question relates to our second son. He was two when we moved to New York and mostly received exposure to English at home and at school. Since being back in Bern, he is learning Swiss German in Kindergarten and is exposed to French with my husband’s parents (the boys sleep over one weekend a month) and our French-speaking friends. Both boys also have French group lessons one hour a week.

The Kindergarten teachers say that he is doing well. He is not speaking Swiss German much but he obviously has a lot of exposure. I am wondering how to give him more exposure to French. When we speak French with our eldest son, the youngest can’t join in and seems to tune out.

I am wondering if he has enough exposure to French. Would it be a good idea to switch our home language to French (and therefore switch to French when I speak to him). If yes, what is the best way to switch?

What you describe is one of the main concerns many mobile families have. Your sons were exposed to several languages at different points of their lives and both have different levels of fluency in all of them which makes it more complicated to nurture them.

You mention that your youngest son doesn’t speak much Swiss German yet, which is not a problem: you arrived a year ago and he is still adjusting to the new country and language. The exposure, like you say, helps a lot and I would give it time. It also helps if he has Swiss German friends, interacts with locals also outside of school.

I understand your concerns with French. Although he speaks French with your husband’s parents, at the lessons once per week and your French friends, he seems to struggle more with this language.

I have two questions: does he have peers who talk French with him during leisure time? You mention your friends talking to him, but those are adults, do they have children who talk to him, play with him?

I hope you don’t mind me trying to picture the language situation within your family. I suppose that your family language is English and that you occasionally speak French to your oldest son? Do you also talk spontaneously French to your youngest son? If so, what are the occasions? If not: why not? It would help to know who talks which language to whom.

Let’s suppose that you talk English to your sons and your husband talks French, and that you sometimes switch to French. My questions would be: When do you switch to French? When other French-speaking persons are with you or because you use the T&P (Time and Place) strategy? Or did you agree with your oldest son to talk French with him occasionally?

Could it be that your youngest son feels for some reason excluded from the conversation you have in French with your oldest son? It might help to have one-on-one time in French with him to boost his confidence in that language. Choose topics he is really interested in when talking French to him and make it fun, not a burden or competition.

If you could answer these questions for me I would love to get back to you as soon as possible.