Q&A: How to motivate a school-aged child to speak the family’s minority language? 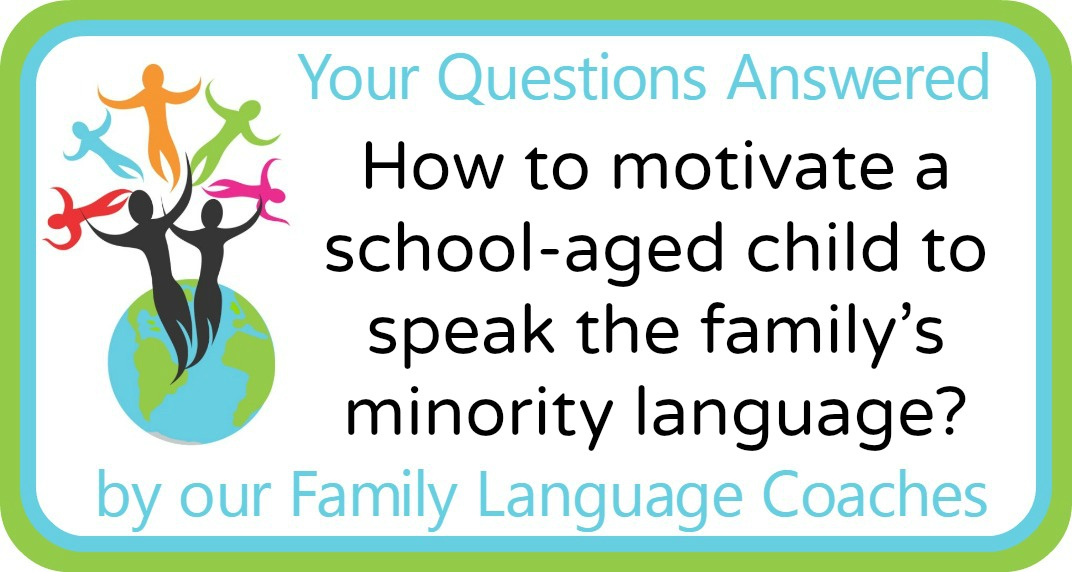 I have an 8-year-old son who had speech problems when he was little. He did not really start talking until maybe two. I was forced to choose a language for his speech therapy classes, I chose English.

My problem now is that he understands Spanish but does not speak it at all. I try at home to talk only in Spanish to him but I somehow always revert to English. My husband only speaks Spanish to him but that hasn’t helped either. He always answers his dad in English.

What can I do to help him start speaking Spanish?
Nidya

thanks for your question about supporting your child’s bilingual language development. Unfortunately, it’s still very common for there to be a language mismatch between the therapist and the family and all too common for the therapy to be conducted in the language of the therapist.

Bilingual children need bilingual intervention as home languages are clearly very important for family relations, identity, and so on. They are also vulnerable to loss if not intensively supported. For other families who might be embarking on speech and language therapy. Here is a blog post with 12 tips for handling being told to drop a language by a health care professional.

At the moment, your son’s understanding of Spanish is good and that’s a great place to be in. He has a solid foundation in the language. I’m going to presume he goes to a school where English is the language of education and therefore of his peers. It’s not unusual then that he would speak English more than Spanish. It’s important to remember that bilingual children vary a lot in their language use – Colin Baker who has written extensively on the topic, talks about it being like the moon – waxing and waning. Or being like a garden – you do all the preparation work: the digging, planting, watering, but you can’t know for certain what will grow and thrive or what weeds will pop up unexpectedly. It takes a long time and can be very frustrating at times!

This may be one of the hardest things to accept about raising a bilingual child – you can’t make them speak the home language(s). However, you can do a lot of things yourself to ensure that the conditions are the best they can be for supporting receptive bilingualism (understanding) at least and then your son is free to speak it when he chooses. It’s important to stay light about it as much as you can as pressure can be off-putting. You don’t want it to become a battle or source of stress.

I don’t know where you live but language and culture go hand in hand, so if you could spark his interest in some aspect of your culture that would be a route into speaking Spanish. Are there are local festivals or cultural events that you could attend?

What kinds of things do you like doing together? Cooking together would be a fun way of supporting Spanish – choose recipes in Spanish and favourite dishes and make the dish together while you speak Spanish. Or going to buy the ingredients together. You know your child best, so you’ll need to spend a little time thinking of activities or situations that might hook his interest and motivate him to start speaking.

Translation activities where you talk about how you say something in Spanish and English and pointing out similarities and differences is very good for language development as it builds what is called metalinguistic awareness – being able to talk about language using language. For example, I have a colleague who is Serbian. I speak Irish. The word for goodbye in Irish means elephant in Serbian and we always laugh about that. You could talk about how it’s easier to learn to read in Spanish because the spelling is more phonetic and there aren’t as many irregularities as in English. You could put some sentences into Google Translate and see what it churns out and have a laugh about the silly translations it produces.

Or you could do a Google search for riddles in Spanish and have a contest to see who can guess the answers quickest.

Of course, he may now be out of practice and a little self-conscious about speaking Spanish so it will take some time for him to start to use it. Once this happens, you could try things like taking turns choosing what language to speak at dinner time or on an outing together. You can decide to do this for five minutes to start and then extend it as he gets more confident.

If you want to try some sneakier tactics, you could start by being slower to respond to him when he speaks English – a little like being slightly hearing impaired when you hear English but not when you hear Spanish.

The most important thing is to keep going and not give up – it will be worth it in the long term.

Good luck with it all!