Q&A: What to do when a multilingual child struggles when starting an immersion program? 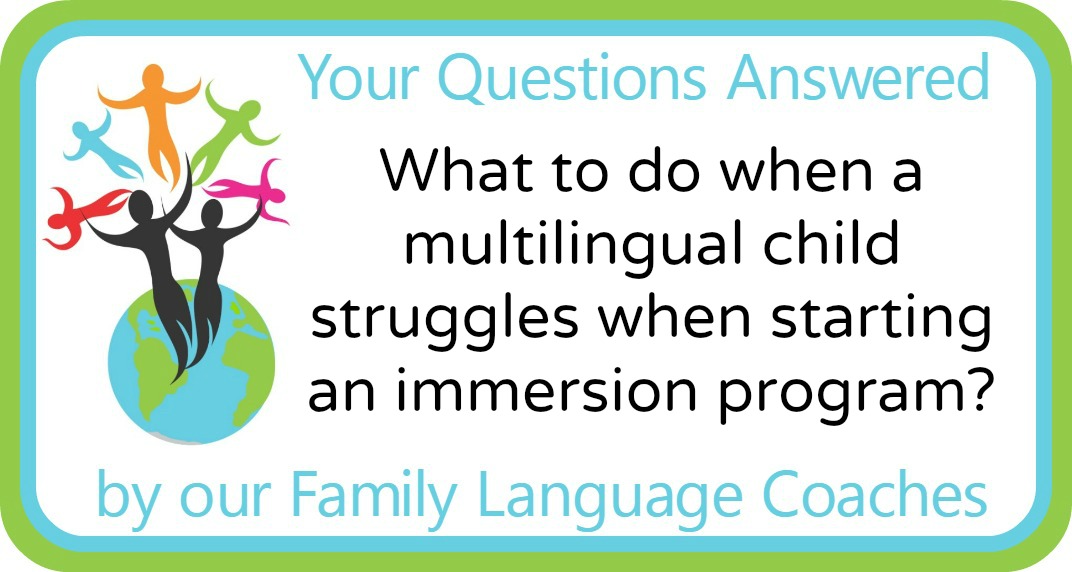 Question about 4th language. I am wondering if we made the right decision in sending our 6-year-old into an immersion program where she is introduced into her fourth language. We live in Canada in an English-speaking province within close proximity to the French speaking province so French is prevalent and often a requirement for jobs. Our daughter has been growing up with two languages at home; Finnish and Brazilian Portuguese, as we her parents are natives from those countries. She has a fairly good grasp of English having learned it from daycare and now in her third year of school, however although English is the community/ majority language around her she is still strongest with Finnish and Portuguese.

We made a decision to send her to an Early French Immersion program where she is currently being taught in French with only math being in English. French will slowly decrease over the years with more English added along the way. However, although her teacher says she has a very good memory for new words and her pronunciation is great she is falling behind her peers with reading and writing.

Neither my partner or I can help as we don’t speak French. Her teacher says she would likely catch up if she would hear more French read to her and would have more chances to read in French. She suggested we hire a tutor or get a teenager to assist with reading/ homework. We will likely do this but we are also now second-guessing our decision to choose the early French for her since even her English is not perfect. She could also do the middle immersion where French is gradually introduced at 4th grade and beyond.

We do not want her to feel lost in school, like she doesn’t know what is going on. We also do not want her to have any negative feelings towards education, or going to school. We recently discovered she is almost fluent with reading in her two native languages which further emphasizes the fact that if she had more exposure to French she would be able to get on the level of her peers.

Our concern is not so much about improving her English as I am sure that will come with time since we will likely always live in an English-speaking region. It is more about whether she will be able to continue to thrive in French, and if we will be able to support her in advancing. Any thoughts?

Perhaps on another level to this dilemma her being in French school is an advantage to her native language abilities as she is not entirely immersed in English in her community to the point that she would like to start using English at home. Thus far she has always followed the one parent, one language principal with us even though we speak English between the two of us. She also speaks Finnish and Portuguese with her little sister.

Our daughter went through a total refusal to speak French period. It only lasted about a week. During that time, we were in closer contact with the teacher trying to figure out what was wrong and what was bothering her. As we worked together both home and school to find out what was wrong, she came through shining, now speaking strongly and confidently French at school.

We praised her (and still do) at home and at school. So perhaps she refused to speak French for a bit trying to see if she could change to English (she did even ask us to move her into an English-speaking class as she said French is too hard). However, since no one budged she relented. Her writing hasn’t gotten much better, and her reading is improving bit by bit. We have hired a tutor to help her once a week as well.

In my opinion she may have been just going through some 1st grade adjustment, going from play based kindergarten to now having to sit at her desk and having to do a lot of work. Nothing that can be done about that.

Thank you for your question and update on your daughter’s school situation. As shown from your case, things can change rather quickly and it is important to keep the communication between the home and school open. You have handled it in an exemplary way!

I chose to publish this question although you already seem to have found the right solution for your daughter, as I think it is a perfect example of how we need to keep in mind that there are always many factors in play when children start school, independent of how many languages are involved or what kind of school it is.

Working together with your child’s teacher to find the underlying issue and being open-minded about the different causes is the best way to help a child. Your situation also shows that we shouldn’t instantly give up when our children are reluctant about something (just like we never give up on offering our kids vegetables!) – but instead dig deeper to understand all the circumstances.

I am also happy to hear that your daughter is making great progress both in speaking her languages as well as reading and writing. By hiring a tutor for her you are helping her with the part that you are unable to do yourself. Getting outside help in the form of tutoring, evening or weekend classes is a great way of taking away some of the pressure when raising a child in many languages. Teaching literacy to your child does not come easy to every parent – even when it is the parent’s mother tongue. In your case, your daughter is learning a language which you are not fluent in, so a tutor is the obvious choice.

Going forward, as the French exposure decreases at school, you may want to consider enrolling her in some extra-curricular activities in French – I would also encourage her to make French-speaking friends who to keep on practicing her French with.

Thank you again for sharing your experience, which will be helpful for many other parents as well!