Q&A: Should an OPOL parent switch the language spoken with a child depending on who is present? 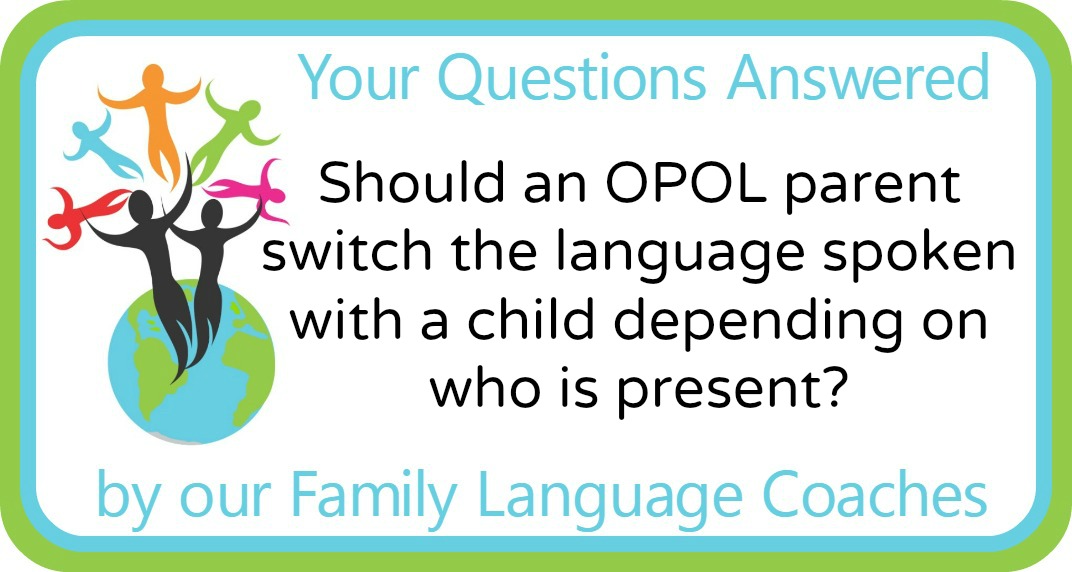 I wanted to ask if, in an OPOL household, it would be detrimental if a parent spoke “the other parent’s language” to the child in certain public environments.

I live in Germany and speak German natively (and English fluently). Both of my parents speak German natively, and limited English. My partner is originally from Russia, but moved here with his parents as a child. He speaks Russian natively, having always spoken it at home, German fluently, as he spent the largest part of his academic life here, and English fluently, due to school. His mother speaks English and German fluently due to work, whereas his father works at a company were the work floor language is English, so his German is limited.

My partner and I want to have kids somewhere in the next five years, and raise them using OPOL. We will continue to live here, so German will be the majority language. I am studying Russian hard, in order to speak my partner’s native language to him every once in a while, and to speak with his relatives that do not speak much/anything else.

The other day, my parents mentioned they find it rude when people speak a language other than German in public. I didn’t really agree with this, but I chatted about it with my partner during dinner later that night, and we agreed we feel speaking a language people around you do not understand is rude if you are engaged in a social interaction with those people, such as at the dinner table or in a work conference.

I do not know how to feel about this. I have learned, reading your site among others, that when using OPOL, the parents should not show the child they speak the “other” language, especially not the minority parent. I am concerned switching when around our respective parents-in-law would cause trouble in the children’s bilingualism (and then I’m not even touching on the oddity of speaking a language we are not native/culturally at home in to our children). However, I understand it is sometimes handier/more polite to do so.

What do you think? Thank you so much for your time!
Mex

Thank you for your question about choosing the languages you should speak in different situations with your future kids. I commend you for thinking and discussing about this topic ahead of time, as it will make things so much easier later.

One parent, one language (OPOL) is the obvious choice for you, with you speaking German and your husband speaking Russian with your children. Your setup will be made all the easier by the fact that your husband already knows German and you are picking up Russian, so there will never be a situation where one you would feel left out of the discussion.

I know that some people, just like your parents, can find it odd, or even rude, for others to speak a language other than the community language when in public. I would politely question this thought – if your parents were to go on holiday to Spain, what would they do? Would they stay silent in public as they do not know the country’s language? Of course, it is important to be polite in any social situation, but I can really see no reason for a blanket ban on speaking different languages in the public.

In other social situations, where there are people present who do not know the language you speak with your child, my recommendation is to stick to your language as far as possible and translate for others when necessary. However, you will be the best judge for what is the best approach in each situation, as this will be different depending on who is present.

The stick-to-your-language rule is more important for the minority language parent, in your case your husband, as the need for consistency is higher the less exposure a child has to a language. Further reading: 5 thoughts about consistency when using OPOL.

All this said, it is natural for a bilingual person to switch between languages, and it is not possible, nor recommendable for a parent to try to hide that they know a certain language – you will be found out, by the latest when you answer a phone call in that language in the presence of your child! The best way to ensure that a language stays as the main language between a child and a parent is to establish a habit of consistently speaking it, not trying to force your child to use it.

I can understand your husband’s wish for everyone to speak the same language, i.e. Russian when his parents are present and German when yours are. However, what will you do when both sets of grandparents (or other relatives) are present? What I am saying is that there will always have to be compromises and the best way to avoid tricky situations is to discuss this in advance with both sides of the family.

Explain how important it is for you that your children learn both languages and that you will always translate when necessary, but that they should not feel offended by your use of language. When you do have children, you can demonstrate this by recapping your discussion with your child in the other language for the benefit of other people present. However, there is no need to completely avoid using “the other” language with your children (should you want to), they will not get confused.