Q&A: When others object to you speaking a non-native language with your children 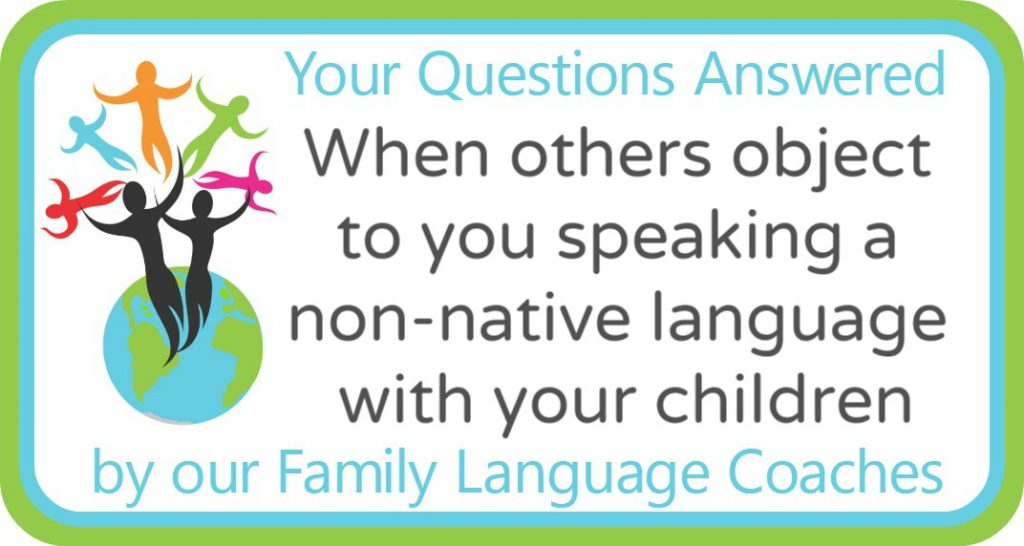 I´m a native speaker of Spanish and fluent in English, currently raising a 14-month-old boy in English. I speak to him in English 100% of the time while my husband speaks in Spanish (the community language as we live in Spain).

My question is how likely it is that my son will become bilingual since I am not a native speaker of English. Most of what I’ve read is about native speakers raising bilingual children, and the few experiences I’ve read about non-native speakers passing on a language which is not their mother tongue are positive, so I’m strongly encouraged to do so.

I will obviously make use of authentic materials and get in contact with natives as much as I can, so my son experiences the language being spoken by natives. I have, however, heard negative (and even offensive) comments, particularly from academics from English Studies departments (not specialists in bilingualism, though) who claim that children in such a situation will learn an artificial type of language that has nothing to do with real English.

Although I’m fluent and have a very good pronunciation, I understand the limitations I may have in certain situations when communicating with my child. On the other hand, I believe the advantages for my boy would outnumber any possible disadvantages.

I would appreciate any guidance on this matter.

Thank you very much for your help.
Claudia

Thank you for your question about teaching your little boy English, which is a fluent, but non-native language for you. I am sorry to hear that you have had to listen to offensive comments and incorrect advice due to your admirable decision to raise your son to be bilingual in Spanish and English.

It sad that even professional linguists still claim that there are strict rules as to what can be considered “real English” and that other variants are artificial or in worst case, not English at all (and subsequently less worthy, I presume). What about speakers of local English dialects, slang, English spoken in Singapore, China, India, Australia? Are all these people not speaking “real English”? Anyone making such claims, should take a look in the mirror and ask themselves what they REALLY mean by that statement.

Okay, I will get off my soap box.

You are taking all the right steps when it comes to passing on English to your son, including arranging opportunities to interact with native speakers of English. Make English books a part of your daily routine: first read to him, then with him, then offer him interesting age-appropriate books as long as he accepts your suggestions. After that, he will be choosing his own books. Once he starts watching children’s programmes (in English), watch them with him and make the time as interactive as possible by talking about the characters and the plot. Read this article for further ideas.

What is most important is that you are comfortable with speaking English with your son, and I can read from your message that this is true for you. So please, ignore others’ comments and continue what you are doing. If there ever comes a point later in his life when you need to have a deeper conversation with him and feel that you would rather have it in Spanish, then do so. There is nothing stopping you from speaking Spanish if you think it is needed to communicate all the nuances and emotions the way you want to. Your son will not get confused by this. He knows that you are a Spanish-speaker – it is not possible to hide this from him.

I fully agree with you that the benefits of speaking a non-native English to your son will far outweigh any temporary disadvantages – and I am not sure there even are any negatives. To your question whether I think your son will become bilingual my answer is: Yes, as long as you arrange enough interactive English exposure to him, he will become a fluent English-speaker. He may grow up with an accent in his English, but so what? Having lived for such a long time outside the country I was born in, I sometimes feel I have an accent in all the languages I speak. They are part of my identity.