Q&A: Should parents ditch English as the family language to support their child’s minority languages? 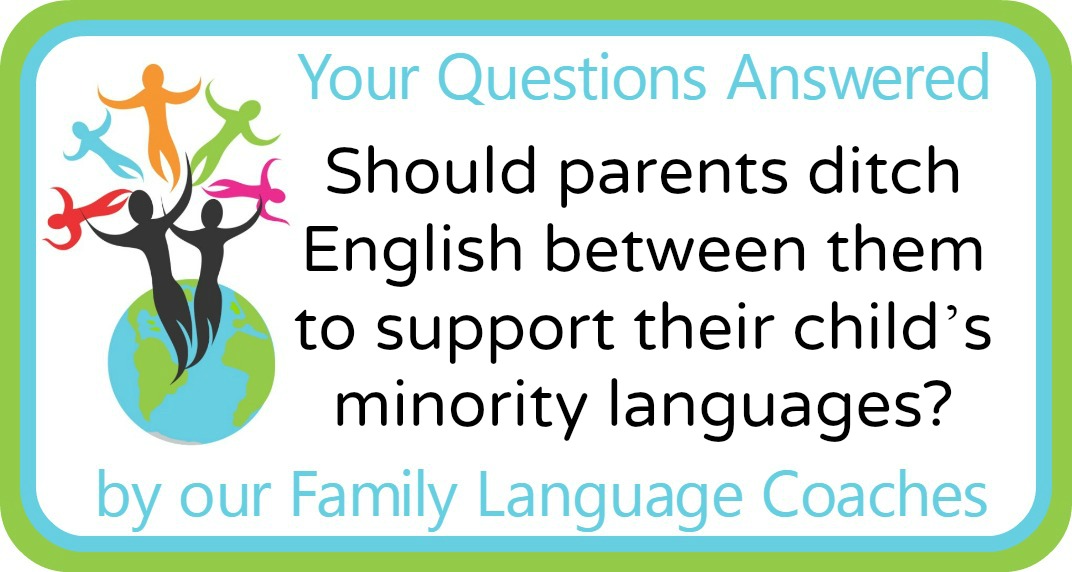 First of all, thank you so much for good work on the subject. I have been looking for such a blog for ages and now my wife found it 🙂

We also have a question regarding raising our son to be trilingual. I have read thru all the other cases, but there is one that makes our case different. My wife and I are both multilingual, speaking to each other in English. My mother tongue is German and my wife’s is Spanish. We life in Malaysia, where there are so many languages around, but English is by far the most constant.

Now our plan is to speak to our son (14) months in the OPOL way and kick English out of the family for the moment. Practically, I am talking to my wife in German, she answers in Spanish and vise versa. We want to give him as much exposure as possible to the minority languages, as the boy has plenty of exposure to English without us anyway.

We are planning to leave the country within a year and are not sure yet if it’ll be South America or Europe. We’d have to adjust the language strategy then accordingly. For now, we’d like to hear your opinion whether two or three languages within the family are recommendable. We’re both very fluent and confident in English, so there is no threat of teaching the boy bad English, but maybe the minority languages would suffer too much?

Many thanks up front for your help.

Thank you for your question – happy that you found us!

Your question is whether you and your wife should continue using English as your common language, or start to exclusively use your mother tongues in the home. This would mean that all your conversations would happen in two languages, German and Spanish, and English would no longer be spoken in the home.

You mention that both of you are multilingual, so I presume that you fully understand Spanish and your wife German – otherwise the setup would not be ideal for the communication between the two of you! When my first daughter was born, her father and I did exactly this – we ditched English as the common language to make sure that there was enough exposure to our daughter’s other languages. Would I do the same again? Probably yes.

This said, I don’t think that this would be the natural, or even best option in all families. Of many reasons, the language we have chosen to speak with a person can be difficult to change. Not only does the language proficiency of the other person matter, but also – and often even more so – our emotional attachment to the language. Many couples with different mother tongues have met and started communicating in a third language, which has become the emotionally closest language of their relationship. They might feel strange saying “I love you!” (or something to that effect) in any other language.

As there has been a couple of months’ since you submitted your question, you may already have decided one way or another. If you have, please, do update us in the comments what your decision was and how it is going. If you haven’t, then think about the emotional impact the change of your common language will have. Note that even if you ditch English, you can still say “I love you!” in it! Since you are both used to switching between languages, this might not be at all difficult for you – we are all different.

Since there will be some time before your son plays a bigger part in family discussions, dropping English would allow significantly more Spanish and German to be spoken in the home. You would also avoid having to switch language depending on the situation, and you and your wife would not have to think about when to speak what language. Your son will be the one switching between Spanish and German once he picks them up – and this is fine. You mention that he will get English exposure from elsewhere, so this is another reason that speaks for dropping it as the home language (at least for now).

Your son will find it normal that to two languages are used in a discussion. For a while this might lead to him believing that everyone functions the same, and that everyone should understand him independent of which language he speaks. As soon as you notice that he understands the concept of different languages it is good to explain that some people only understand one language, and that it might be a language he cannot speak!

Depending on the language environment of the country you will move to within the next year, you may find it beneficial to change your family language strategy. Should you move to a German- or Spanish-speaking location, you might want to reconsider your family language. Reintroducing English would help maintain your son’s skills in it, however to develop his English skills, he would need opportunities to interact in it. If your new home is in an English-speaking environment, I would continue with the same OPOL-approach. If your move introduces an additional language, let’s say you move to Italy, then you need to again weigh up the different options. Please do get in touch again, should this be the case!