by Rita Rosenback | May 9, 2019 | Babies, Coaches, Q&A Being the parent in a multilingual family, Rita R, School-aged children | 0 comments 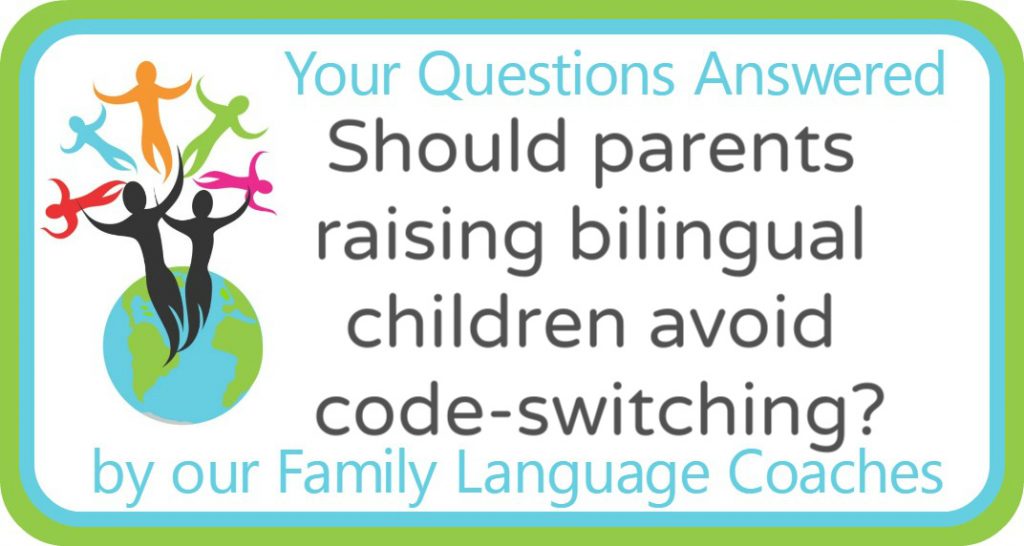 My name is Benedicte, and my husband and I are expecting a baby boy in the next few weeks. We live in France and are both bilingual French-English. My husband was raised by an American father and French mother. I was raised by French-speaking parents in Mauritius but went to English-speaking schools. We tend to speak English to each other, but with a lot of French thrown in and a lot of code-switching between the two.

We want to raise our child to be bilingual, but we are torn about which language to speak to him as English and French are both important to us. The most rational language strategy would be to speak English at home and have our child learn French at daycare/school (he will be going to daycare as from 4 months) but we are not completely satisfied with this scenario.

Only speaking one language or the other to our child would feel like giving up a part of our personality, especially if we were giving up speaking French to our child. Which language learning strategy would you suggest for us?

Also, is it harmful to our child’s language learning if we continue to code-switch when Pierre and I speak to each other?

Thank you so much for your help and advice,
Benedicte

Both you and your husband are bilingual and would like your baby boy to also learn English and French, just like you did when you were children. Together you speak mainly English, with French thrown in. When two bilinguals, who speak the same languages, talk with each other code-switching is a normal and important part of the communication.

As you live in France and your son will attend daycare in French from four months of age (and go on to a French school, I presume), he will become fluent in French. As a matter of fact, French will inevitably become his dominant language.

He will learn his English from the two of you, and he will pick up the way you speak it, including the code-switching. As mentioned, code-switching is normal and a part of your and your husband’s natural way of speaking, and I can see that you would not want to change that. For this reason, I don’t think that time and place strategies like alternating between the two languages (e.g. switching after two weeks, or weekdays/weekends) would work in your situation. You may also find the one parent, one language approach challenging, as it would mean that one of you would not speak French with your son.

What you need to keep in mind, is that your husband had his father as the English-only-speaker, and you learnt English a school. This means that both of you also know how to speak without code-switching. You can go into monolingual mode when speaking with an English- or French-speaker who does not know the other language, to make sure the other person can understand you. No doubt you want the same for your son.

To give him this ability he will need enough of that type of English exposure. There are many ways to do this. One of the most important is to read to and later with your son in English – often and different books. Whenever you get the chance, visit places where he will be immersed in English. Look for English-speaking play- and activity groups for your son. Once he starts watching children’s programmes, choose high-quality English ones. My recommendation is to as often as possible watch the programmes together and make it an interactive activity. Speak about the characters and the plot with him. You may also want to consider putting him in an English-speaking or dual-language school, if one is available.

Another aspect to keep in mind is that since French will become your son’s strongest language, English is the one that will need the most support. If your son is used to speaking both French and English with you and your husband, then French may become his preferred language at home as well. In this scenario, English could lose ground. Children are pragmatic in their language choices and will speak the language that comes easiest to them. To counteract French taking over at home, it would be beneficial to have a strong routine of speaking English with him. I don’t mean that you have to drop the code-switching, but that the default language at home would be English.