Q&A: How to pass on not only the heritage language, but also the culture to the next generation? 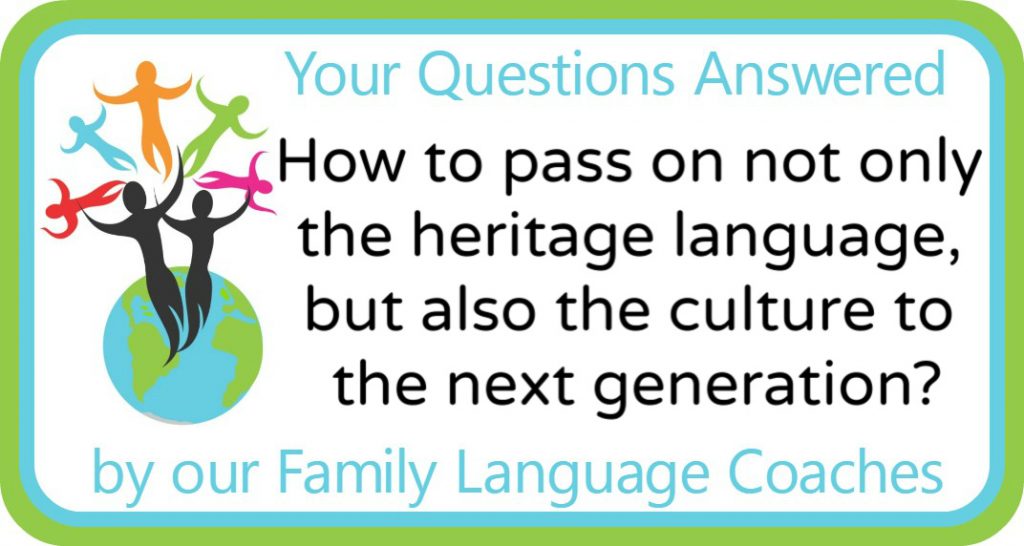 My question doesn’t really pertain to language specifically, but the idea of culture. My kids are fine in terms of their mother tongue since my husband cannot speak English and only Hindi, and that my English is not too fluent. So they are fluent and have no problems.

I am looking for advice to keep them in our culture. I have been trying to find websites addressing this and could not find any. I feel this is the closest I can find to address this. My kids are growing up in a big Indian community and are exposed and involved in their culture, but as they get older, they are getting more Americanized and are adopting American values, dating and making friends with other cultures, despite having a heavy cultural influence on them.

A few parents in my community tend to feel the same. We are seeing that language is not the only one thing that makes kids stay attached to their native culture, but their manners, how they think, act, and how religious they are also are important. People say, even my own kids say, that it is a different time and different culture and point out that our native country, India has changed too, which is true and that I do not like.

I personally was upset by this because I and many others want to pass down not only language, but our beliefs, mindset, traditions and so forth. Some of my friends suggested to limit your children to foreign exposure and make only friends within the community, to do this to make sure they keep their strong Indian identity, but I do not know if that can be a good or bad thing.

I am observing that many second generation, speak more English even if they know how to speak our language and use it with peers and their children. Some are into American customs and traditions. This I think would be detrimental since we will not be able to pass our culture as purely as possible and later things will be lost.

Advice? Probably a hard question but I will appreciate if you can answer to the best you can.

Thank you for your question about passing on not only the family’s heritage language but also the culture to the next generation. You are right in your last comment to say that this is a hard question, because it is! It is also one that many other families that have moved to a different country and culture grapple with.

To give you not only my view, but also that of the next generation, I have asked my daughter to give her thoughts on your question. For 20 years, since she was six years old, she has lived outside either of her parents’ cultures – her father grew up in India and I am from Finland. We all now live in the UK. This is her response:

However much you try to shield your children from the American culture, there will always be an inherently American part of them. Teenagers and young adults naturally push the boundaries and explore the different opportunities in the social environments they live.

Later in life, once they have gone through this phase, you may find that they adopt more Indian values than you expected. But this will come from them, they will choose the Indian values that make sense to them.

You as a parent obviously want to do the best for your children and bring them up in the best possible way. While your children are living with you under your roof, they will likely go along with your wishes, but this does not necessarily reflect what they truly believe. When they move away however, and have their own families, that is the time when you will truly see their values.

Indian and American values don’t have to be at odds with each other. There are ways of being comfortable with both sides of one’s identity. And naturally, this involves behaving differently according to who you are with at the time. For example, you probably behave very differently with your children compared to your parents!

In terms of language choice, you will not be able to control what language they speak with their peers, however be proud that your children can speak Hindi fluently! When it comes to language, we instinctively choose the easiest/most appropriate form of communication for each situation. This means that your children will most likely use English with their friends.

Wishing you and your family all the best,
Daniela

Just like my daughter, your children are growing up as Third Culture Kids (TCKs). By definition, a TCK is a child who has spent a significant part of their early development years in a culture other than their parents’ (or the culture of their passport country). Inevitably, our children will grow up differently to you and me. I recommend that you read the original (and in my opinion still the best) book on the topic: Third Culture Kids: The Experience of Growing Up Among Worlds  by D C Pollock, R E Van Reken and M V Pollock.

I understand your strong feelings about the Indian culture. Having lived away from Finland for 20 years, I am also continuously surprised by the changes in my country of birth. However, whether I like the changes or not – I will not be able to alter the fact that my home country has moved on.

People who move away from their native countries are often the ones to uphold old traditions – and the language – much more strictly than what is the case “back home”. This is a completely natural reaction. When we emigrate, we keep a snapshot of our native culture as it is at that point. From then onwards we are however no longer part of the continuous change in our home country. This is something that happens in every single country and culture across the world, also in the US, and you and your children are part of that change.

The best you can do is to be a great role model and representative of the Indian culture for your children (and future grandchildren). I would however not try to push the culture on them, let alone criticize them for not behaving as you did when you were young (no children do this). The more you try to force them to adapt to certain attitudes, values or religious norms, the more pushback you will get.

I am sure you already do this, but focus on creating strong, positive, fun memories around your culture. They may not appreciate them now, but they will do when they grow up. The happier the memories, the more likely they are to want their own children to experience the same special occasions and to feel the kind of bond you have in your family.

You have been successful in raising your kids to speak fluent Hindi, which is a fantastic achievement! This will give your children the opportunity to continue maintaining their close relationship to the culture and pass it on their children. They will also create their own version of the culture – just like every generation does across the world.

Sometimes we all want to stop the clock – keep our kids at a certain age, not see kittens grow up. We however also know that this is not possible, so we must let go and allow them to gain their independence. Letting go is hard, but we can make it easier by being open and not judging. We should not let our cultural heritage become a battleground which can split families and keep generations apart. Instead we should cherish it, so it can stay as a strong backbone in our family lives over generations to come.

P.S. Dear Amrita, I hope you get to read my answer as the email address you gave me bounced back, so you will not know that your question was scheduled as a Q&A article. I would love to hear your comments below!