Q&A: Should a parent change the language spoken with a child in anticipation of an international move? 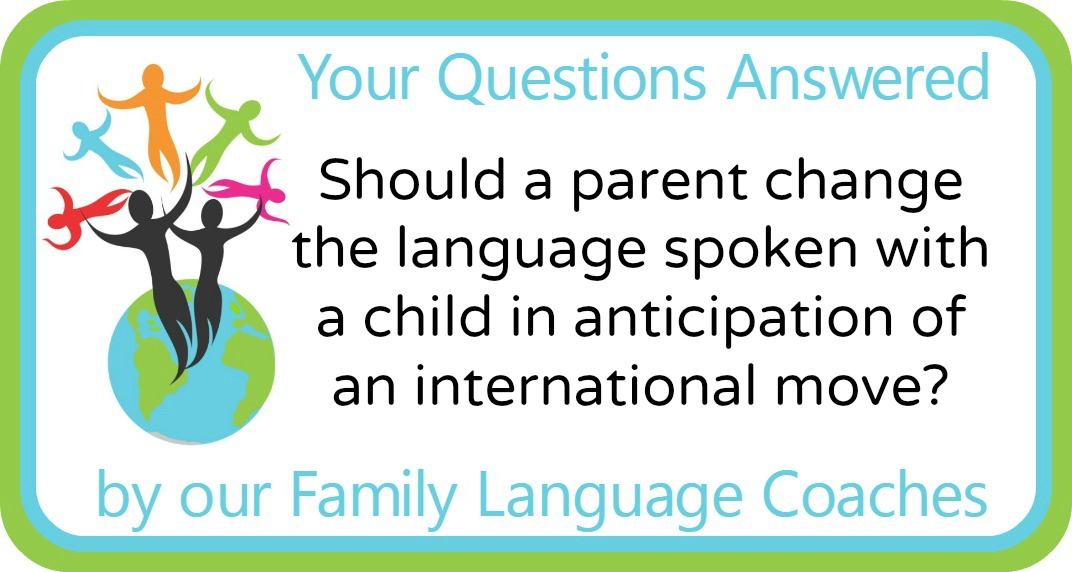 We are a Spanish\Catalan family who has lived in China for nearly four years and our child speaks the three languages without no problem as we do OPOL and she goes to a Chinese school. We are planning to move to England in November or so, so we decided to put her into an English school twice a week until July, when we’ll leave China.

We have always spoken our own languages to her but I am thinking to switch to English once we arrive to Spain so she doesn’t forget the English learned here so she can use it in England once we move there. Is it a good idea? Or will it confuse her?

I feel Spanish will be covered by the context and grandparents and I could cover English so her entrance in an English school would be easier but I am not sure if it is the right move.

Thanks so much for your help and the work you do!

Thank you for your message and question about whether to switch to using English with your school-aged daughter in anticipation of your move to the U.K. later in the year.

You have done really well to raise her trilingual in Spanish, Catalan and Chinese! She has also been learning English, and your move to the U.K. will make English her fourth language. Your concern is how to maintain her English during your 4-month stay in Spain.

Switching the language you speak with a child is not an easy thing to do and I wouldn’t recommend it in your case. There are other ways you can support her English while you are in Spain, which are less intrusive to your family routines. In addition, there are other longer term implications you need to take into consideration.

You will be moving from one country to another twice within a short time. A move is a big change for all of you, including your daughter, and I would do my best not to add any avoidable stress factors. Changing the language with your little girl would be disruptive for her – it is not that you would confuse her, using different languages in a family does not cause confusion (as you well know), but I find it important that you continue using the language that she is most comfortable with when you speak with her during the transition.

During your time in Spain, you can still sing English songs, recite rhymes, watch children’s programmes together and so on. You could also use the British Council’s LearnEnglish Kid to do fun exercises suitable for her age. There are also plenty of other resources available online – do a search for example for home-schooling materials for English.

It will of course take a while for her to settle in to the school in the U.K., but teachers are generally great at helping children with this and I would recommend you to work closely with the school once you arrive in the U.K. You can continue supporting your daughter’s English without changing the language you speak to her.

The fact is that once you are in the U.K. and she attends school in English, this will become one of her strongest languages and it is important that you continue maintaining her Spanish and Catalan skills. With you living in an English-speaking environment, she will be getting enough exposure to English, so make sure you stock up on Spanish and Catalan reading material before you leave for the U.K. The same goes for Chinese, you do not mention your intentions for maintaining her Chinese, but I know you can find children’s activities in Chinese in the U.K. – it of course depends on where you will be based.

Wishing you a successful multilingual family journey across the world!